The Best Things To Do in Naha, Okinawa 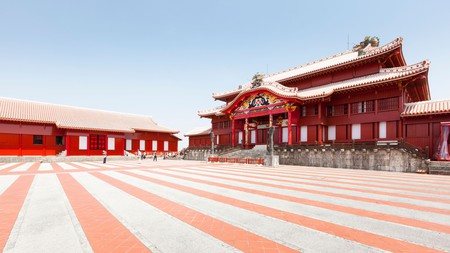 Okinawa’s capital is a vibrant and welcoming city that perfectly blends a laidback island atmosphere with fascinating sightseeing spots, lively shopping locales and distinctive regional cuisine. Here are the best things to do while you’re there.

Naha is the largest city in the subtropical paradise of Okinawa, Japan’s southernmost prefecture. It acts as the gateway to this picturesque chain of islands, and was once the home of the Ryukyu royal family when the prefecture was an independent kingdom. Thanks to its distant location and unique heritage, Naha has a distinctive culture that’s very different to mainland Japan. From its cuisine to its arts and crafts, influences from China, the USA and other countries can still be seen, all suffused with a chilled-out island vibe to match the sunny weather.

Naha has an enviable amount of things to see and do, from picturesque shrines, gardens and craft districts, to a striking castle, lively shopping streets and its very own beach. Its close proximity to the sea means you can also easily escape the city and explore the beauty of the surrounding ocean and its abundant marine life.

Hit the sand at Naminoue Beach 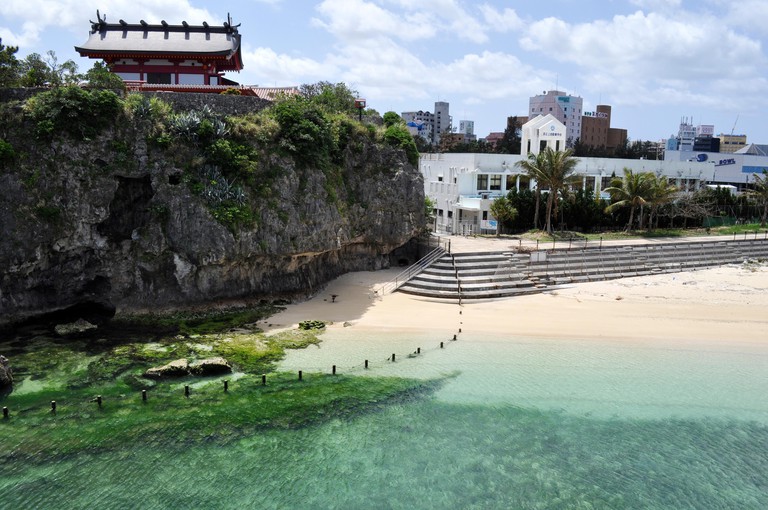 Okinawa is famous for its beautiful coastlines, although Naha’s Naminoue Beach may not be exactly what you’re expecting. The only beach in Naha city where you can swim, it has one rather distinctive quirk: a highway bridge cutting straight across the sea before it. Happily this unusual feature doesn’t spoil the beach’s appeal, and it’s a popular spot for swimming, sunbathing and snorkelling. The waters are shallow, clean and calm, and parasols, barbecues and deck chairs are available for rent from April to October. Within easy walking distance from the city centre, Naminoue Beach’s pristine sands are ideal for a spot of relaxation at any time. 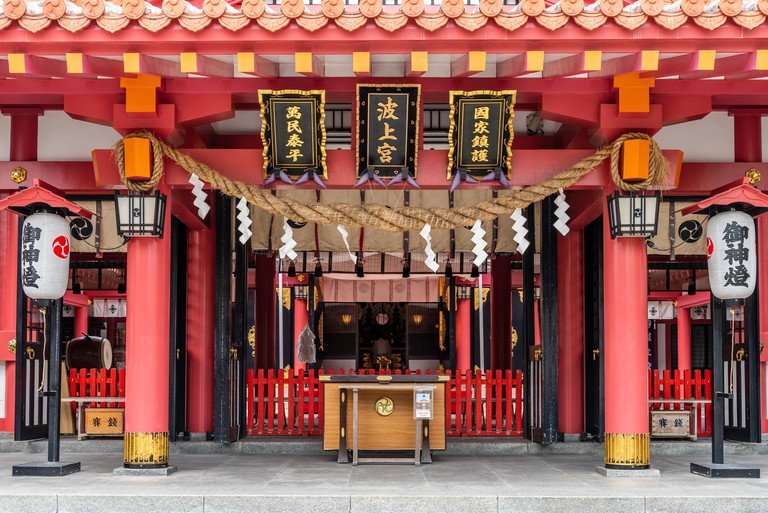 On the clifftop above Naminoue Beach sits the striking Naminoue Shrine, aptly translated as ‘the shrines above the waves’. The most important Shinto shrine on Okinawa island, it’s dedicated to nirai kanai, the land of the gods and source of all life. Its striking red-and-white facade and picturesque location make it one of Naha’s unmissable spots. Much of the shrine was destroyed during World War II, however the buildings have been faithfully rebuilt. If you visit in May, don’t miss the shrine’s fantastic Nanmin Festival, which features singing, dancing, and an epic tug-of-war on the beach below. Admission to the shrine is free. 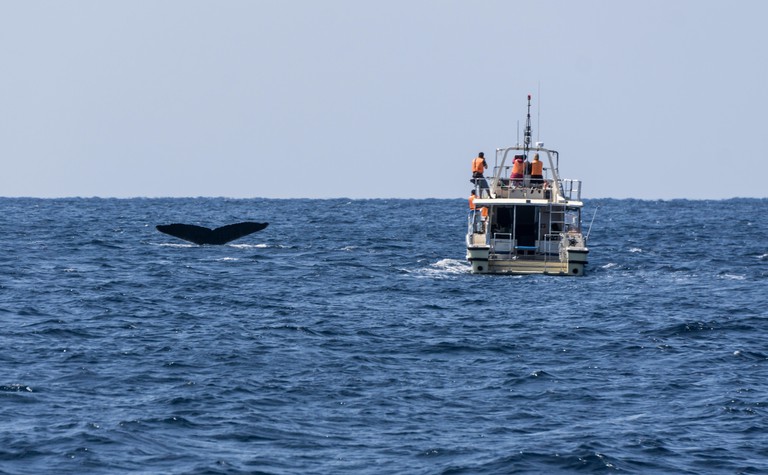 For those who’d rather be in or on the water, Naha has plenty to offer. Okinawa is one of the best spots in Japan – if not the world – for scuba diving and snorkelling, and dive trips set out from the city every day. Explore iconic dive spots like the Blue Cave and Kerama Islands, or take a lesson in surfing or stand-up paddle boarding. Although Naha’s winters are very mild, many find the water a little chilly at that time of year. Instead, join a whale watching tour between January and March to watch majestic humpback whales leap and dive up close. 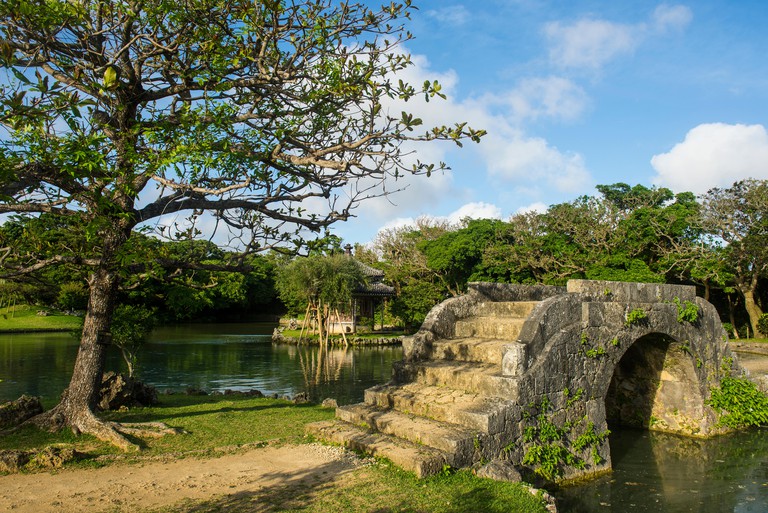 This pair of traditional landscape gardens provide a tranquil escape from the hustle and bustle of the city. UNESCO-recognised Shikina-en is an 18th-century walking garden that originally served as a second residence for Ryukyu royalty. The pleasant path leads past a red-tiled wooden palace and pavilions, through woodland, across stone bridges, and around the central pond. Fukushu-en is a more recent addition, opened in 1992 to celebrate 10 years of friendship with Naha’s sister city in China, Fuzhou. Designed in authentic Chinese style, it features a turtle-filled lake, striking rock formations, pagodas, keyhole gates, and a waterfall. Admission is just a few hundred yen. 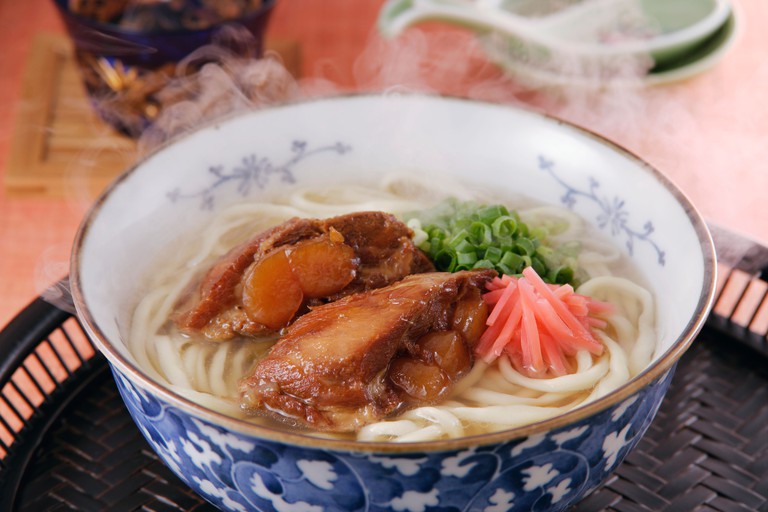 Okinawa’s remote location from mainland Japan and its unique heritage as the independent Ryukyu Kingdom have resulted in a distinctive local cuisine islanders are rightly proud of. Restaurant menus are bursting with local ingredients such as goya (bitter melon), beni-imo (purple sweet potato) and shiquasa (a citrus fruit). Some of the dishes to look out for include taco rice, which serves typical taco ingredients over white rice, and Okinawa soba noodles. The latter differs from mainland Japanese soba by using wheat noodles instead of those made from buckwheat flour.

Stroll around the awesome Shuri Castle 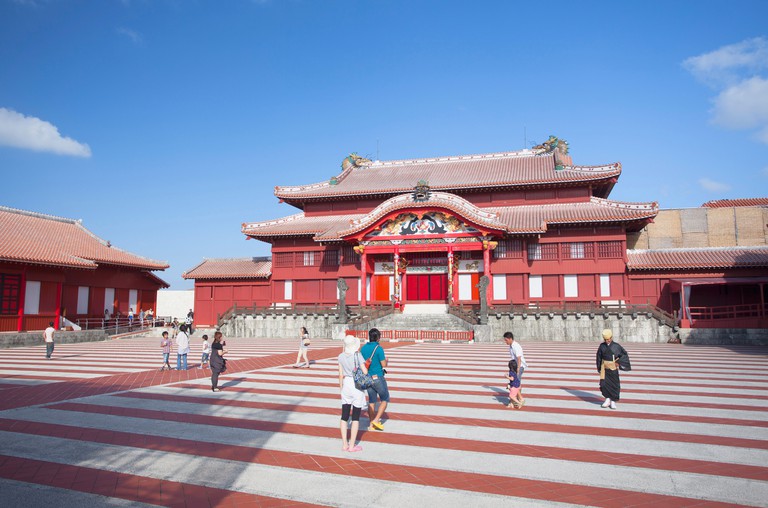 © robertharding / Alamy Stock Photo
Shuri is the jewel in Naha’s crown, a vibrant red hilltop castle that was once the administrative centre of the Ryukyu Kingdom. Home to the kings of old for several centuries, it has now been designated as one of Okinawa’s UNESCO World Heritage Sites. From striking gates to imposing stone walls, the sprawling complex is steeped in history, brought to life through exhibits inside the buildings. Visitors should note that in October 2019, much of the castle was destroyed in a fire. Reconstruction is expected to be completed by 2026, but meanwhile the park and some of the expansive grounds are still open to explore.

Shop ’til you drop on Kokusai Dori 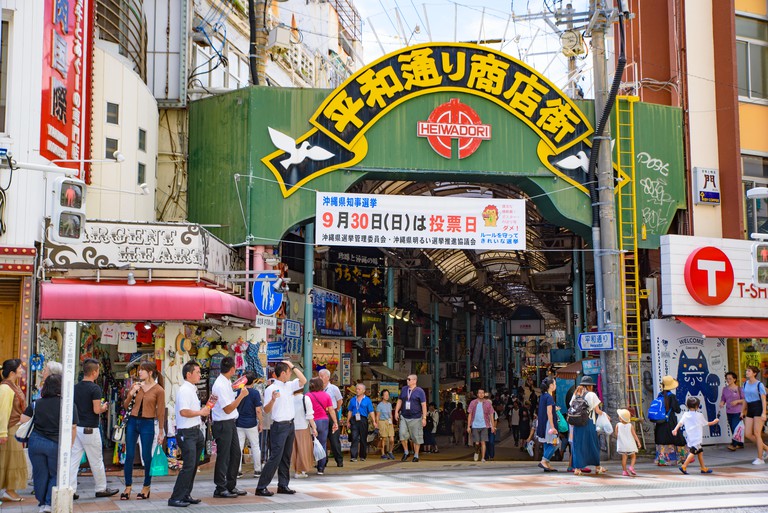 Kokusai Dori – which translates as International Street – is Naha’s main thoroughfare, running about 2km (1.3mi) through the centre of the city. It’s a lively hubbub of activity, lined with restaurants, bars, and plenty of shops. Browse quirky souvenir stores, island fashion boutiques, and gorgeous Ryukyu glass stores filled with jewellery the colour of the nearby ocean. At the road’s southern end, the Palette Kumoji shopping mall has a wealth of upmarket stores as well as a cinema. Meanwhile the covered shopping arcades branching off from Kokusai Dori, such as Heiwa Dori (Peace Street), are home to smaller market stalls and colourful booths.

This peaceful Naha neighbourhood has been the centre of ceramics production in the city since the 17th century, and its narrow streets are lined with galleries and shops showcasing their wares. You can find both traditional and contemporary pieces for sale, including chopstick holders, shisa statues (guardian lion-dogs), crockery, and vases. Watch the masters at work, or try your hand at creating your own pottery by attending a workshop. Don’t miss the Tsuboya Pottery Museum (entry ¥350 (£2.70)), where you can learn more about the history of the craft and the different techniques used. 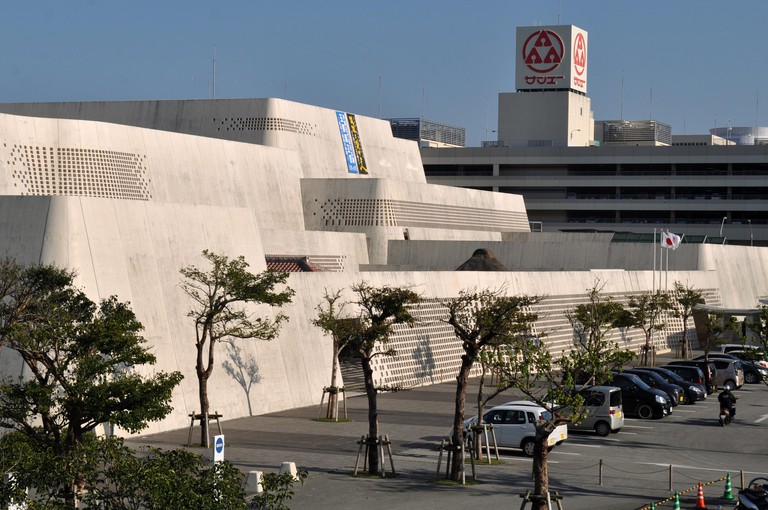 Naha has a long and fascinating history as the former capital of the Ryukyu Kingdom, and the best place to learn more about its heritage is at this duo of museums. Sharing a building in the north of the city, in true Okinawa style you enter over a glass floor above a coral reef. There are an impressive variety of exhibits to explore, from local crafts, archaeology, folklore, natural history, as well as modern artwork by artists with a connection to the islands. General entry is ¥530 (£4) for the prefectural museum and ¥400 (£3) for the art museum, with separate entry fees for special exhibitions.

Party the night away in style

Here in Naha the fun doesn’t stop when the sun goes down – in fact as sunset hits, the city is only just getting started. From party hotspots like Bar Spade and Club Epica to welcoming pubs and craft beer bars like Taste of Okinawa and Helios, there’s a nightlife venue to suit everyone. Head to Parker’s Mood Jazz Club for some live music, or Hyatt Regency’s The Bar for great views out over the city. Be sure to try the ever-popular Orion rice lager, some island-brewed craft beer, or awamori, a local spirit distilled from long-grain rice.