The Best Things To Do in Hakuba in Spring and Summer 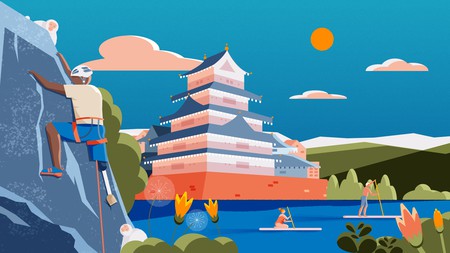 Just a few hours from Tokyo, Hakuba is best known for its world-class skiing and snowboarding. But it’s a wonder to explore once the snow melts, too. From mountain biking and visiting Japanese snow monkeys to glamping and craft beer, these are the best things to do in Hakuba in spring and summer.

Hakuba burst onto the global scene after hosting ski events at the 1998 Nagano Olympics, but while some Japanese winter sports destinations shut down in summertime, Hakuba simply shifts to what’s referred to as “green season” mode, offering up even more adventure sports than in winter – including hiking, mountain biking and paragliding – as well as cultural activities. With its true blue skies and the freshest of fresh air, Hakuba is a wonderful place to experience in spring and summer, which are also great months to enjoy the area’s craft brews and burgeoning culinary scene. 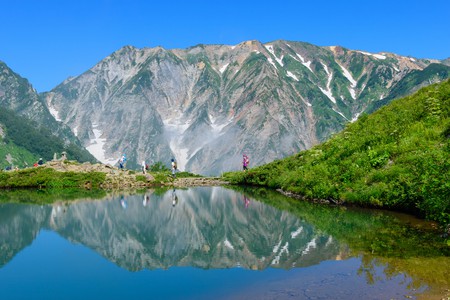 Hakuba takes full advantage of its mountain setting in spring and summer, with excellent opportunities for hiking and biking. For a relatively easy day hike with splendid views, catch Happo-one’s ADAM Gondola and chairlift up to an 1,820-metre elevation, from which you can work your way to the stunning Happo-ike Pond, whose mirror-like waters perfectly reflect the mountainous scenery, in about 90 minutes (the highest elevation you’ll reach, the cairn at Karamatsudake, is about 2,700m). Along the way you’ll spot snow-capped peaks and alpine flowers, and the sky will feel so close that you’ll start to understand why the region is known as “the roof of Japan”. Hike down on one of a few well-marked trails, or stop off at one of the chairlift stations’ cafes for a well-earned snack or meal.

Hakuba’s trails are also accessible for mountain bikes; Iwatake Mountain Bike Park has four different courses to choose from. Elsewhere, the Minekata Trails (also known as Kikori-no-mori Trails) run through the town and are maintained by the village, and you’ll find about 40 “cycle stations” throughout Hakuba that include restrooms, air pumps, simple tools and bicycle rentals. Check out Hakuba Cycling, Rhythm Japan or Spicy for trail maps and mountain bike rental.

Get an adrenaline boost on Hakuba’s lakes, rivers and mountains 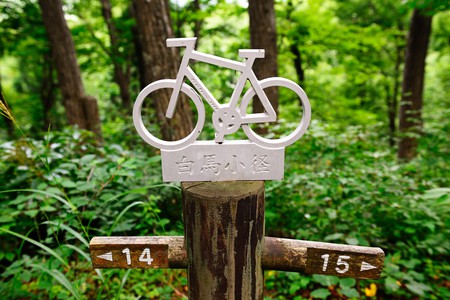 Think of an outdoor pursuit, and chances are you’ll find somewhere to try it in and around Hakuba. Evergreen Outdoor Center is a leading ski school during the winter months, but in the warmer season it offers an impressive variety of lake, river and mountain tours. You can try your hand at canyoning in Kamoshika; rafting the Himekawa River; canoeing or stand-up paddle-boarding on nearby Lake Aoki (just 15 minutes away by car); or rock-climbing at the Hakuba Village outdoor climbing wall – or even a nearby crag. Or, for an extra adrenaline rush and a literal bird’s-eye view of the spectacular scenery, try paragliding near Iimori.

Get some R&R at an onsen 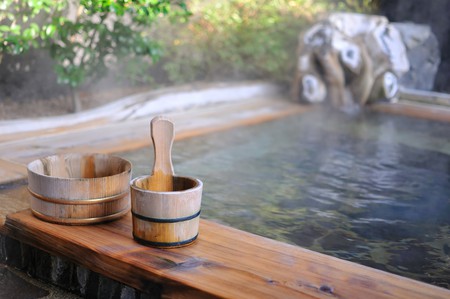 Onsen are a cornerstone of Japanese social life | © Tomophotography / iStock

Onsen are a cornerstone of Japanese social life, and Hokkaido’s many hot spring baths are renowned for their mineral-rich healing properties. In Hakuba itself, the Hakuba Onsen Ryokan SHIROUMA-SO offers up traditional Japanese lodging (think paper walls, tatami sleeping mats and tranquil views of the surrounding nature) with its own traditional onsen bath (tattoos allowed). About 30 minutes away in the village of Omachi, you’ll find a veritable hotbed of hot springs open to the public, with prices starting from ¥400 for adults. Do take note of onsen etiquette: nudity is required, long hair should be tied up and tattoos are generally taboo (though small ones can probably be covered with a plaster).

Hakuba is sure to hold massive appeal for craft-beer lovers. Founded by a Cambridge-trained scientist in 2015, Hakuba Brewing Company is Japan’s only brewery that’s 100% emission-free, and it’s also powered by hydroelectricity. The brewery uses snow from nearby year-round glaciers to create its five different craft beers: Hakuba Pale Ale, Hakuba Black, Hakuba IPA, Hakuba Session IPA and Hakuba Amber. While there’s no on-site taproom, keen visitors can contact the brewery for the opportunity for a tasting or information on where to purchase their brews, and it’s conveniently located on Hakuba’s main road smack in the middle of its 11 ski resorts. Local watering holes such as Mocking Bird Pub (open year-round, in lively Echoland) and The Rabbit Hole (in Wadano Woods, near the base of Happo-one’s Sakka chairlift) both feature well-curated beer and cocktail lists; the latter also serves delicious healthy breakfasts and stellar burgers.

Rock out with Otari taiko drumming 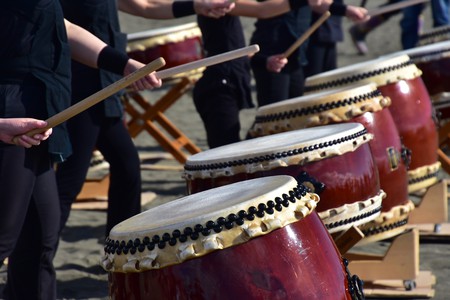 Archaeological records show that taiko drumming has been a vibrant part of Japanese culture for well over 1,000 years | ©Taro Hama / iStock

Taiko drumming, which describes kumi-daiko ensemble drumming performances, has mythological origins. According to Japanese folklore, the sun goddess Amaterasu Omikami shut herself off in a cave to hide from her brother, plunging the world into endless darkness. Only when 800 gods of heaven and earth began to jump and dance outside the cave did she emerge in curiosity, bringing light back into the world. That pounding and dancing is considered the origin of taiko. Archaeological records show it’s been a vibrant part of Japanese culture – on the battlefield, as a mode of communication and in religious rituals – for well over 1,000 years. It just so happens that the village of Otari, located right next to Hakuba near Cortina Ski Resort, has its own troupe of professional performers. In addition to public performances, a number of local tour companies will organise taiko drum tours and lessons.

Take a detour to Zenko-ji temple 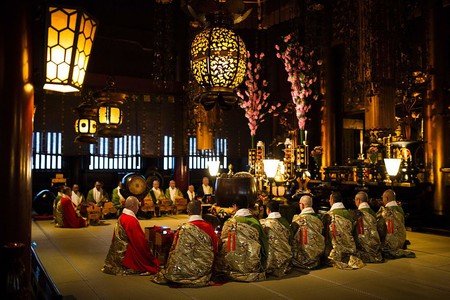 “Temple fatigue” can affect visitors to Japan, but Zenko-ji temple in Nagano (about an hour’s drive from Hakuba) is well worth the trip. Dating back to the seventh century, this beautiful and important temple houses the first Buddha statue ever brought to Japan, and its main hall has a pitch-black tunnel with the “key to paradise” attached somewhere along its route. It’s said that anyone who can find and touch the key in the darkness will also reach enlightenment. Visitors approach the temple through a charming traditional-style village with paving stones, street lamps and old-fashioned lanterns; it’s a bit touristy but awfully atmospheric. Temple entrance is ¥500 for an adult.

There’s much to love about Hakuba, but it doesn’t always feel particularly Japanese (restaurant waitstaff and tour leaders often have distinctly Aussie or British accents). The nearby Omachi Alpine Museum, a short drive or train ride away, counters this by spotlighting regional Japanese mountain culture. It’s a fascinating look at the flora and fauna of the Japanese Alps along with the history of the region’s peoples and cultures, in particular its strong mountain-climbing tradition. Admission is ¥400 per adult. 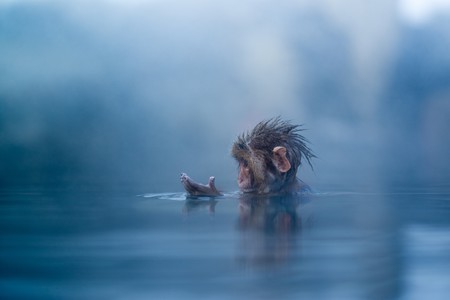 Hakuba’s adorable snow monkeys, which are famous for bathing in the region’s hot springs, are nearly as big a draw as the area’s skiing during the winter months. While their surrounds are particularly atmospheric in winter, they’re no less cute in the warmer months, and Jingokudani Yaen-Koen is open year-round. Visitors can enjoy a pleasant 30-minute walk through the woods before arriving at the monkey-viewing area. There are numerous tour packages on offer from Hakuba, which is about 90 minutes’ drive from the monkey park, but it’s also accessible via train from Nagano. Entrance to the park is ¥800, and it’s open daily in summer from 8.30am-5pm.

Mominoki Hotel in Wadano near Happo-one offers a special “forest glamping” package from late April to October to take advantage of the thinned-out crowds and spectacularly verdant scenery at this time of year. The specially designated glamping area features stylish tents strung with fairy lights along with a fire pit (free toasting marshmallows included), hammocks, an outdoor bar and grilled barbecue dinner spread. Word is a treehouse and onsen are also in the works. From ¥24,000 per person (half-board).

If tents aren’t your thing, consider staying at the nearby Morino Lodge, which offers clean, comfortable, affordable accommodation (and also happens to serve up stellar pizzas that are made on the premises). From here, you can still enjoy Mominoki’s Fire Pit Bar and Forest Grill barbecue dinner, which is about five minutes away on foot.

Step back in time at Matsumoto Castle 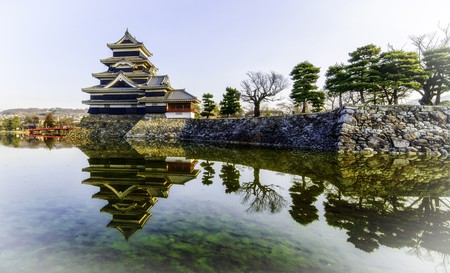 Japan is filled with striking castles and temples, but due to a combination of wars and natural disasters, many have been reconstructed in the 20th century. Not so with Matsumoto Castle: built over 400 years ago, it’s one of the oldest standing castles in Japan, with its original wooden interiors and external stonework still intact. Matsumoto Castle’s unique setting on an open plain also makes for stunning photos (and views, particularly from its highest level). In summer the castle plays host to a number of taiko drum performances. Admission is ¥700 for adults, and the museum is easily reached via train from Hakuba. 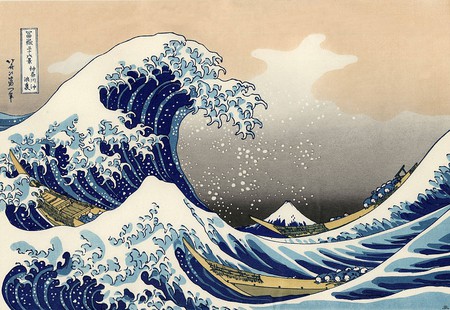 Perhaps the most famous ukiyo-e work of all, The Great Wave Off Kanagawa demonstrates the art of traditional Japanese woodblock printing | © VCG Wilson / Corbis via Getty Images

The Hokusai-kan Museum in the charming town of Obuse is a must for fans of ukiyo-e, the art of traditional Japanese woodblock printing. The museum is named for one of the form’s great masters, Hokusai Katsushika (1760–1849), who painted perhaps the most famous ukiyo-e work of all, The Great Wave Off Kanagawa, and spent some of the last years of his life in Obuse. Visitors to the museum can admire a wide range of paintings, murals and books, along with two intricately detailed festival floats. Admission is ¥1,000 for adults. Obuse is about an hour and 15 minutes from Hakuba by car; it’s most easily reached by direct train from Nagano Station .

If you’re a fan of traditional Japanese sake, it’s also worth checking out the town’s Masuichi-Ichimura Sake Brewery, which dates back to 1755 and is located just down the street from the museum. Tastings are available, along with the unique opportunity to purchase the sake, which is not available for sale anywhere else in Japan (and makes for a wonderful gift or souvenir).