The Best Things to Do in Asahikawa in Winter 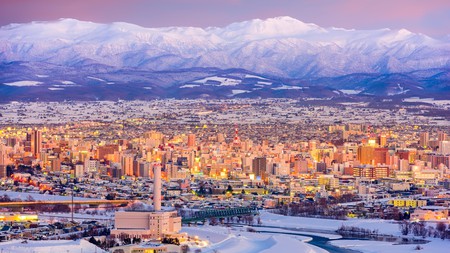 In 1902, the thermometers in Hokkaido’s second city of Asahikawa hit -41C – the lowest temperature on record in Japan. Although many consider it Japan’s coldest city, in truth Asahikawa is rarely this bone-chilling even in the depths of winter, with January’s average low around -13°C. And with so much to do there, winter is in fact an exciting time to visit Asahikawa.

Along with the some of the country’s lowest temperatures, Asahikawa also sees some of the highest snowfall (averaging over 170cm in January), and it’s close to the incredible powder snow of wild, mountainous Daisetsuzan National Park. Unsurprisingly, this is a major draw for winter sports enthusiasts from around the world, who base themselves in Asahikawa and head wherever conditions are best each day, returning to the city’s cosy bars and lively izakaya (traditional Japanese inns) in the evening. Some hotels offer shuttle buses to the slopes and other skiing-related services.

From snow sculptures to steaming bowls of ramen, here are some of Asahikawa’s most enticing attractions in the winter months.

Slice through some of Hokkaido’s best powder snow

Among the best ski resorts and back-country skiing areas within distance of Asahikawa are Kamui Ski Links, Asahidake Ski Course and Kurodake Ski Area, plus Furano and Tomamu further afield.

Kamui Ski Links, a 30-minute drive west of the city centre, is great for all ability levels. Around two thirds of the slopes are groomed, and the 25 courses are split fairly evenly into beginner, intermediate and advanced runs. Lift passes are also very reasonable, at under ¥4,000 per day.

For a slightly wilder experience, head into Daisetsuzan National Park, where you’ll find some of the world’s coldest and lightest snow. Asahidake Ski Course, on Hokkaido’s tallest mountain, enjoys the longest season in Japan (December to May) and suits experienced skiers and snowboarders best. As it’s on an active volcano, you may also spot fumaroles belching steam over the snow if you decide to head off piste.

Daisetsuzan Sounkyo Kurodake Ski Area, in the northeastern section of the park, is ideal for experienced skiers and snowboarders who want to go off piste to tackle some steep slopes and deep powder. The first natural snow resort to open in Japan each year, it is gloriously uncrowded and offers exceptional and challenging backcountry skiing.

Embrace the cold at a winter festival

Every February, Asahikawa celebrates the cold with its Winter Festival. People come from all over Japan to enjoy snow slides and ice bars and to see spectacular sculptures created from snow and ice. Near Asahibashi (Asahi Bridge) you can see an enormous snow sculpture as well as the fireworks that open and close the festival. Glittering ice carvings, illuminated every night, are displayed along pedestrianised Heiwa-dori, with more sculptures still in the snow-blanketed expanse of Tokiwa Park.

In dramatic Sounkyo, a gorge by Kurodake in Daisetsuzan National Park, the annual Sounkyo Onsen Ice Waterfall Festival runs from January to March and also features huge, illuminated sculptures. Other attractions include an atmospheric ice tunnel, fireworks, an ice shrine, games, and activities such as ice climbing on natural frozen falls.

Stroll through the winter illuminations

Outside of the festival, the city still brightens up the white-shrouded streets with illuminations. Machi Akari is the main one, lasting for nearly the whole winter season and bringing some colour to the long pedestrianised shopping street of Heiwa-dori, stretching from the train station through Asahikawa’s downtown area. Other streets are also lit up, with Hikari no Ehon-dori (also known as Ryokudo, or Green Street), which connects to Tokiwa Park, often covered in a twinkling canopy of fairy lights.

Asahikawa is full of cute cafés and laid-back izakaya, but it’s best known for two things: ramen and sake. The local version of the former is a variation on the famous noodle dish with a salty, oily broth based on shoyu (soy sauce). You can try several types at Asahikawa Ramen Village, a little out of town, which offers half portions from all the best local ramen restaurants in one place. Alternatively, head to the stores’ main branches in the city centre.

To try sake, head to one of the city’s breweries. Otokoyama is the best known, having been brewing in Asahikawa for 350 years, and the building contains an interesting museum, a tasting area and a well-priced shop. Takasago has a gift shop and tasting room in a historic building near the train station, plus a brewery in a more modern building opposite.

Hit the slopes on a yukiita

Literally meaning ‘snow board’, a yukiita is a wooden board, often with a strap at the front, which you can use to ‘surf’ on powder snow. There are several local outfits running yukiita taster sessions around Asahikawa, especially in the Furano, Biei and Sounkyo areas. Some even allow you to make your own board.

Sometimes called powsurfing, using this kind of binding-free board (your feet aren’t strapped on as with skis and snowboards) gives a sense of freedom and excitement to winter sports rookies and old hands alike.

Near as it is to the active volcanoes of Daisetsuzan, Asahikawa has plenty of hot springs. They’re perfect at the end of a long day on the slopes (or even just forging a path through the ice and snow of the city), soothing your muscles with hot, mineral-rich water. Onsen (natural hot springs) are also a big part of Japanese culture, and well worth visiting at least once.

The impressive, modern complex at Manyo no Yu and the reddish, iron-rich waters of Tatsu no Yu are the closest baths to central Asahikawa. Mori no Yu Hanakagura isn’t far from the airport and has an outdoor bath with views over to the snowy mountains of Daisetsuzan.

There are other hot springs within the national park itself. The slightly touristy resort town of Sounkyo Onsen, by Kurodake, has several, including the public bath Kurodake no Yu. Asahidake Onsen has fewer facilities but is a generally quieter and more attractive resort town. Shirogane Onsen, near Biei on the park’s western edge, also has a wealth of hot springs, and is near the much-photographed Aoiike (Blue Pond).

Another way to enjoy the winter landscapes around Asahikawa is by snowshoeing, which, though less strenuous than skiing or snowboarding, still allows you access to pristine areas you couldn’t normally reach without a vehicle. The Asahidake area has excellent snowshoeing, and the dramatic gorge at Tenninkyo and the open expanses around Biei are also beautiful.

Be sure to go with a guide if you’re not experienced, and they’ll safely lead you out onto untouched snowdrifts and through deep forests to see Hokkaido’s quiet winter landscapes at their most peaceful.

At the other end of the spectrum from snowshoeing is snowmobiling, which allows you to cover a lot of ground at high speed on a roaring machine. You don’t need a licence to ride one of these in Japan, and there are several reputable tour operators near Asahikawa – especially in the Furano area, or at the flower fields of Shikisai no Oka near Biei – which can lead you on trips through the area’s wilder corners. Alternatively, some ski resorts offer snowmobiling activities.