The Best Restaurants in Shinjuku According to Food Expert Akemi Ito 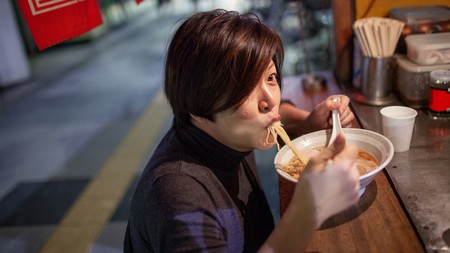 Bring Tokyo to your mind’s eye, and chances are you’ll think of Shinjuku. This archetypal neighbourhood is home to the world’s busiest train station, the world-famous Golden Gai and hundreds of restaurants. To whet your appetite, here are 13 spots selected by food expert and local Shinjuku resident Akemi Ito.

“Shinjuku is a chaotic neighbourhood – even its restaurant scene [is chaotic],” Akemi (Keimi) Ito, travel planner and local food expert in Shinjuku, tells Culture Trip. “It’s really the perfect area for a night out. While neighbouring Roppongi is just a party nightclub area, Shinjuku is more like the local way.”

Navigating the neighbourhood can be a bit of a struggle at first if you’re coming by subway. Shinjuku Station is the busiest railway station in the world and can easily lead you into pockets of dining deserts if you don’t know where you’re going.

Ito compares Tokyo’s Shinjuku to New York’s Times Square. While hotels on the east side of this neighbourhood are perfectly located for dinner and drinks, there is a trade-off. “It’s not clean in the morning,” says Ito, laughing.

To help put you on the right track, here is a list of some of the top eats in this vibrant Tokyo neighbourhood, from Michelin-star meals to a dinner theatre with robots.

A note on otoshi

“Please remember that there is one mandatory system of Japanese pubs. It’s called otoshi,” explains Ito. Otoshi is essentially an assortment of small appetisers that are placed on the table without you having ordered them, like pickled vegetables or edamame. Ito suggests thinking of it as a table charge or cover fee – it’s only about ¥300 (£2.25) per person, but every customer needs to pay for it. “It’s just a tradition,” says Ito. “Don’t be upset about it!”

Get lost in the alleyways of Golden Gai 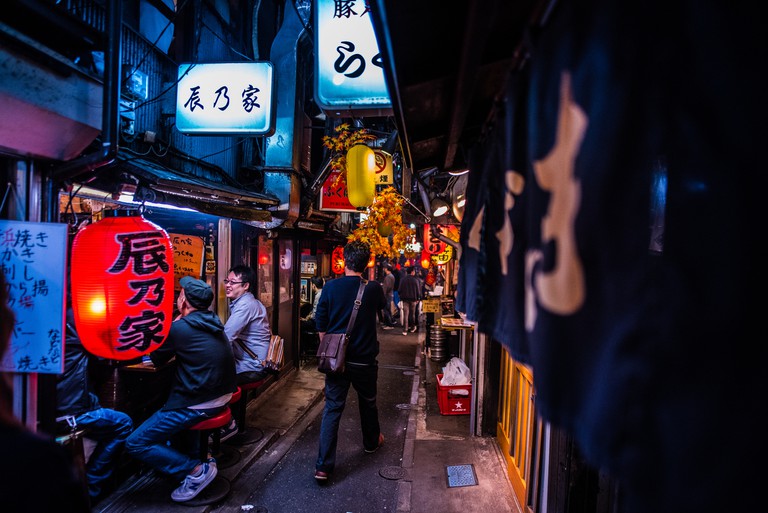 © Aon168 / iStock
Ito mentions how many of the travellers she hosts express their interest in Golden Gai, which has become an overwhelming tourist destination due to its network of alleys leading to teeny-tiny bars and restaurants, reflecting a Japan of yesteryear. “Golden Gai is now very popular, but I still think it’s worth it to visit because you can communicate with locals while eating local foods.” Japanese people don’t usually make small talk with strangers, but according to Ito, the micro-izakayas in the Golden Gai are an exception.
Open In Google Maps
6 1, 1-chōme, Kabukichō Shinjuku City, Tokyo, 160-0021, Japan
+81332096418
Visit Website
Give us feedback

Chow down on chicken at MichiShirube 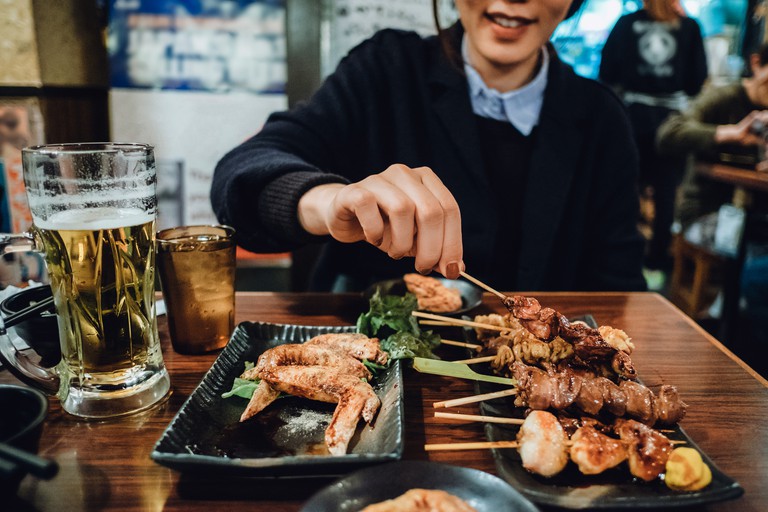 “I was born and raised in Shinjuku, so I’ve tried many restaurants,” says Ito. “I strongly recommend trying yakitori [chicken skewers] at MichiShirube. Many tourists go to Omoide or Golden Gai, but the yakitori there is much more expensive and tastes just OK even though the atmosphere is cool⁠. It’s a real traditional Japanese izakaya. Much, much better than touristy ones!” Ito sends everyone she knows to this cosy spot on the east side of Shinjuku Station. There are only 24 seats in total, but if you make a reservation, you can book a table on the second floor. “My favourite is sabiyaki [slightly rare chicken breast with wasabi], tsukune [chicken meatball] and its original clam ramen,” says Ito.

Get your dip on at Fūunji

As it’s regarded by many as having some of the best ramen in the world, to say that Fūunji does tsukemen (dipping noodles) well would be an understatement. The creamy blend of chicken soup and fish powder results in a thick, almost gravy-like texture that clings to every bite of ramen noodle perfectly. Helmed by chef and owner Miyake-san, who continues to run the kitchen today, this hole-in-the-wall ramen shop is always bustling with patrons who stop by to see whether the revered ramen master lives up to the hype.

Indulge in handmade soba from DAIAN 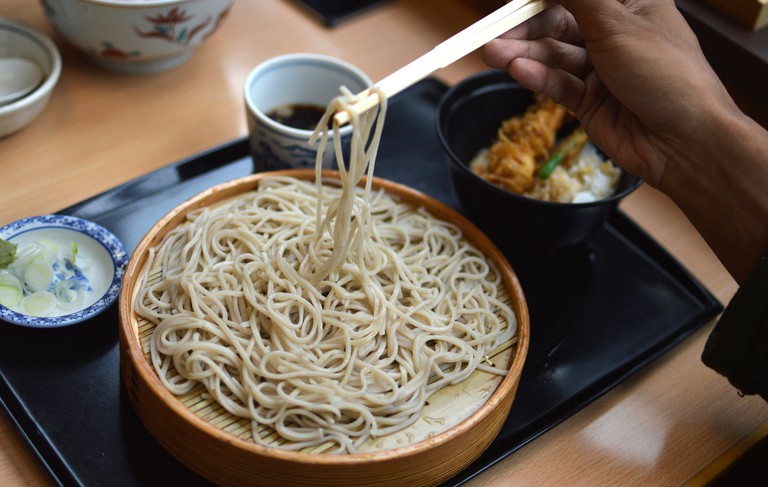 Quietly sandwiched between arcades and vintage shops, DAIAN serves up delightful hand-kneaded soba noodles and more in a cosy, Zen-like dining space (with charming private rooms available for business lunches or intimate dates). Note that a line starts to form well before the restaurant opens for lunch, so get here early.

Duck into Saganeya for cold drinks and hot karaage

Blink and you’ll miss this tiny karaage restaurant. Located in the business section of Shinjuku, this intimate hole in the wall has just one table and about seven seats at the bar, where you can chat with the chef (who speaks English). A healthy order of scallop and mushroom karaage, which pack a serious punch of umami and are best washed down with a couple of whisky highballs, is highly recommended. 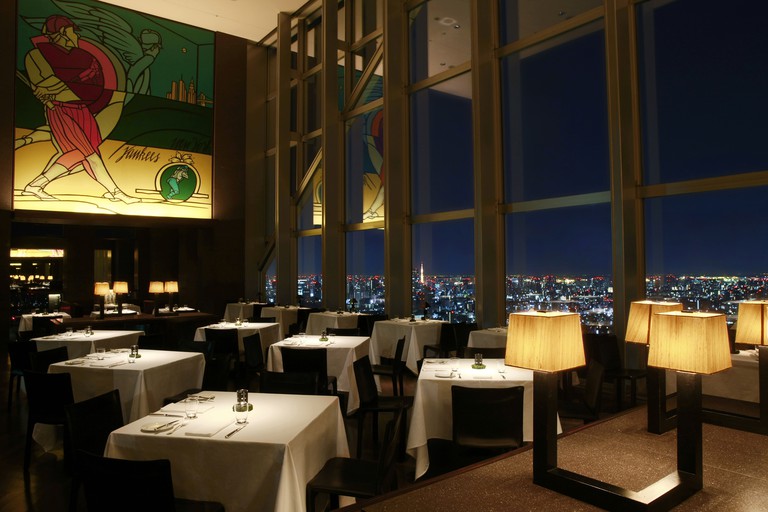 New York Grill in Shinjuku’s Park Hyatt Hotel is famous for being in a scene in Hollywood’s Lost in Translation (2003). Celebrity affiliations aside, this high-end bar-grill makes some of the best steaks in Tokyo. The desserts are also top-notch.

Head to Robot Restaurant for a weird and wonderful evening 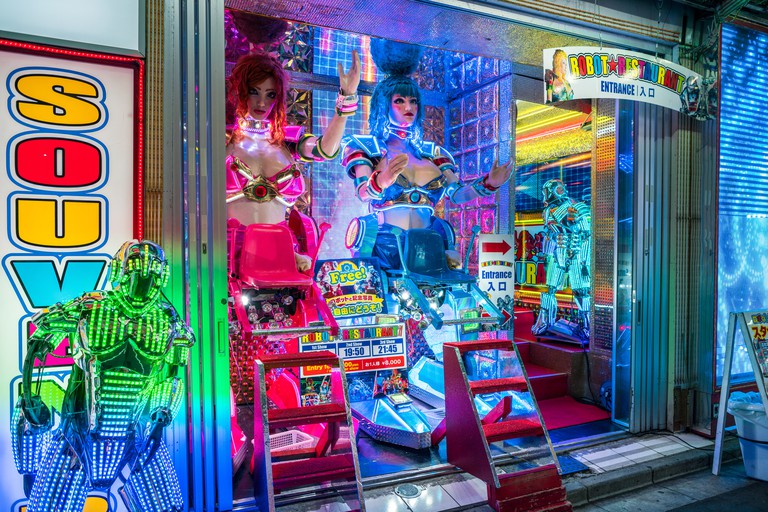 Shinjuku’s Robot Restaurant is pure electrifying fun. While it’s distinctly designed for tourists, it’s a must-visit for first-time travellers to Japan. Keep in mind that the energetic theatre is much more about the experience than the food, so don’t go in expecting a five-star meal. Have a few beers and grab some sharing appetisers while watching the fighting robots and actors in outrageous costumes.

Opt for tradition at Kagurazaka Kado

This former traditional home has been converted into a cosy Japanese restaurant, right in the heart of the historical Kagurazaka district. Both bar-style and Japanese-style seating on a tatami (straw mat) is available, lending an air of authenticity. 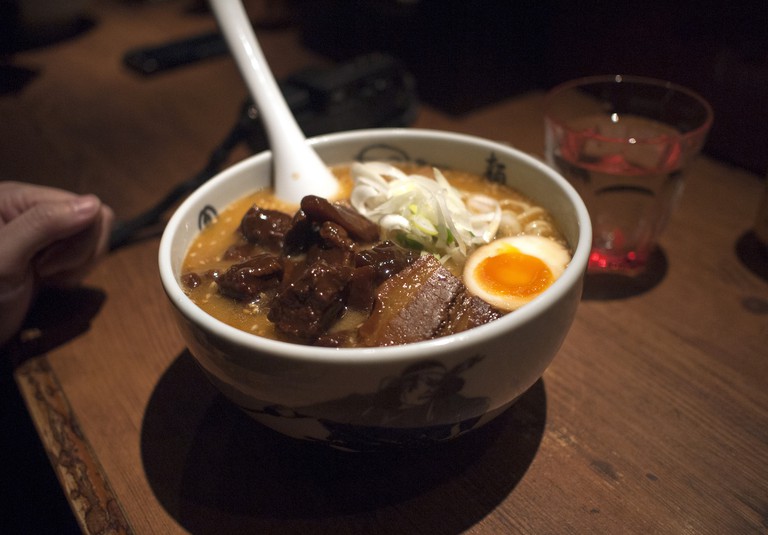 Menya Musashi is a highly rated ramen restaurant close to Shinjuku Station. Named after legendary samurai Miyamoto Musashi (who has now become the venue’s unofficial mascot), the restaurant offers hearty and generous portions – perfect for all would-be warriors out there. Place your order at the machine by the door, then sit down and savour the goodness.

Dine at a Michelin restaurant for a few dimes at Nakajima

If you’re hoping to experience the full Michelin-star experience without the premium price tag, consider heading to Nakajima for its set lunch special. While a kaiseki dinner will set you back upward of ¥15,000 (£111.75), a lunch special (which includes rice, miso soup, pickled vegetables and a sardine-based main course) will cost just ¥800 (£6). Note that the restaurant almost always has a lunchtime queue – even before it opens – so try to arrive early.

‘Meat’ in the middle at Jingisukan Yoichi Shinjuku 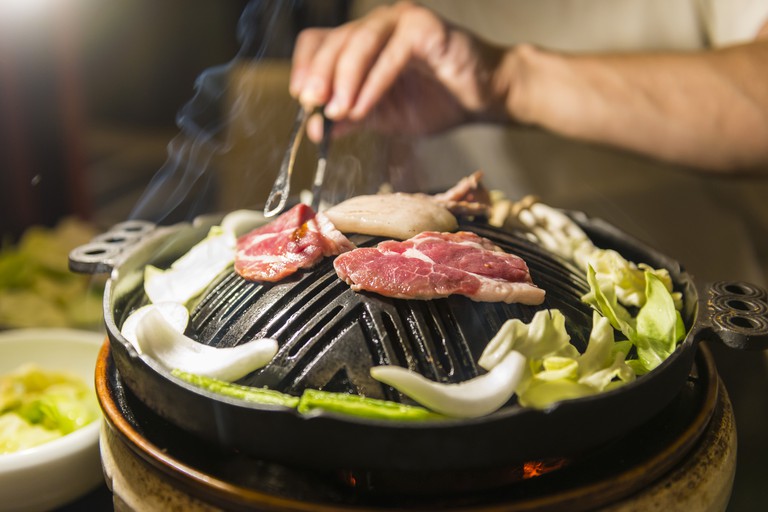 Named after Genghis Khan, the founder and emperor of the Mongol Empire, jingisukan is a grilled lamb and vegetable dish that is cooked on a hot metal skillet or grill and then eaten with a special sauce. Jingisukan Yoichi Shinjuku boasts some of the best jingisukan in all of Tokyo, largely thanks to its fresh, high-quality mutton meat, which gets flown in from Australia.

While ramen and soba used to be regarded as nothing more than a cheap and satisfying lunch option, the tides have turned in terms of quality, innovation and prestige. Sobahouse Konjikihototogisu was recently awarded one star by the Michelin Guide, making it the third ramen restaurant to be recognised – and it’s well-deserved. At Konjikihototogisu, the full-flavoured broth reigns supreme, with unexpected ingredients including porcini mushroom and truffle oil. 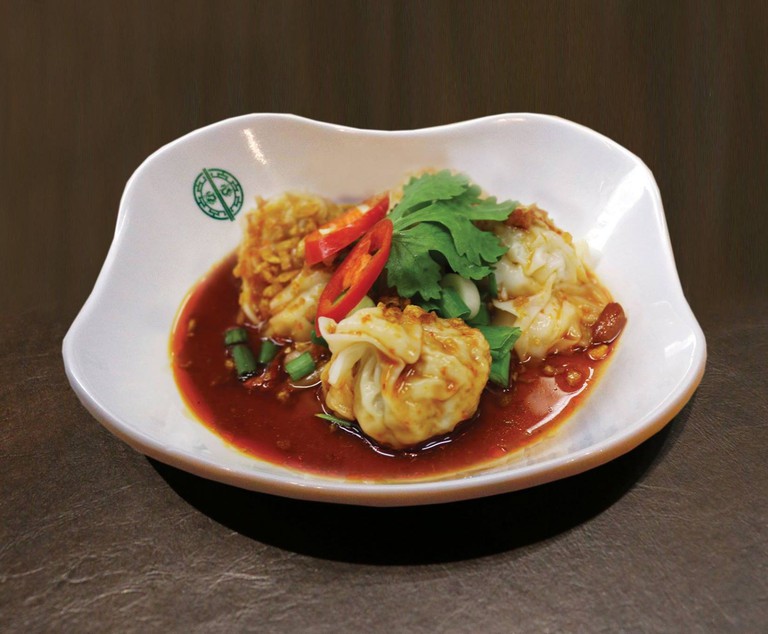 The original Tim Ho Wan is known as the world’s cheapest Michelin-star restaurant, but it has since expanded to many different outposts across Asia. Nestled into Shinjuku’s Southern Terrace, this casual eatery boasts some of the most delicious and authentic dim sum flavours, including well-loved classics like pork dumplings in hot and spicy sauce and sesame balls with molten salted egg.

This is an updated version of an article originally created by Alicia Joy.