The Best Restaurants in Otaru, Japan 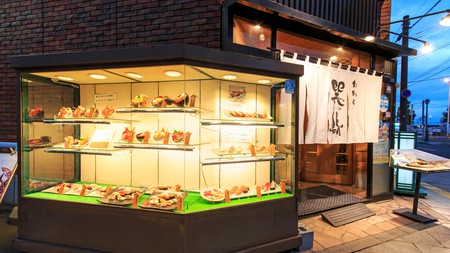 Seafood dominates the dining scene in the port city of Otaru. We’ve rounded up the best restaurants, so you can enjoy more than the city’s famous sushi.

In the early 1900s, Otaru was one of the wealthiest cities in Japan. It quickly became the economic capital of Japan’s northern island of Hokkaido, owing partly to a boom in the herring fishing industry. The imposing brick banks, warehouses, canals and fishing-tycoon mansions built during this era have now been converted into restaurants, bars, shops, museums and places to stay.

Herring has since fallen out of favour. But the city has not shed its reputation as one of the best places in Japan for seafood, boasting more sushi restaurants per capita than anywhere else in the nation. Local fishermen catch a huge variety of fish, which they supply to more than 100 sushi restaurants in Otaru alone. Here are 10 of the best places to enjoy not only the local seafood, but other great cuisine as well. 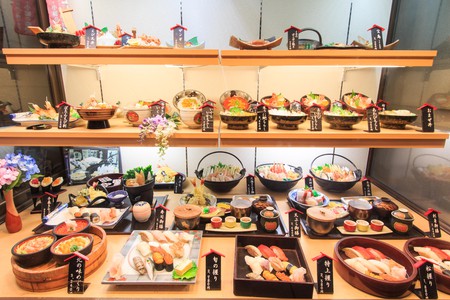 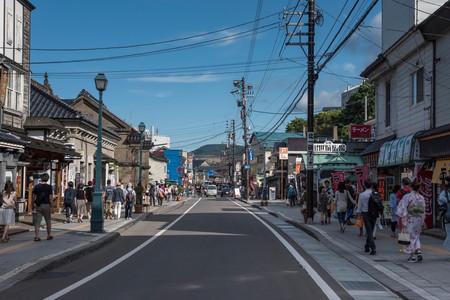 Right by Otaru Station is Sankaku Market. And in the middle of this market, you will find Takinami Shokudo, one of the best places in the city to try a donburi rice bowl topped with fresh seafood. With its walls covered in picture menus and green paper lanterns hanging from the ceiling, this small seafood shack might not look like much, but its rice bowls are things of beauty. The bestseller is takinami-don, a rice bowl topped with eight types of seafood for ¥2,200 (£17). If you want to choose the toppings yourself, go for the wagamama-don, priced from ¥1,980 (£15.25), for a small rice bowl with three types of seafood – big eaters can splurge on a ¥2,750 (£21) bowl that comes with four types of fish. Green tea and seafood miso soup are complimentary.

Sushi Kou for the whole family

Chef Takeyama Koji opened Sushi Kou in his hometown of Otaru in 2001. His mission was to open a restaurant in a century-old brick warehouse where patrons could enjoy affordable sushi in a casual atmosphere. The most popular dish is the 25cm (10in)-wide Hokkai-don, a donburi rice bowl topped with seasonal Hokkaido seafood, such as sea urchin, shrimp, salmon, salmon roe and scallops. Younger diners are catered for with the children’s sushi plate with cucumber rolls, salmon or tuna sushi, juice, jelly and a toy. Expect to pay around ¥2,500 (£19) per person.

Sushi Yoshi for dinner with a true fish expert

A part-time job in a sushi restaurant during his high school days led Otaru-born Nishimori Yoshiyuki to become a sushi chef. To really master his craft, Nishimori went on to work at top sushi restaurants and even became a fisherman’s apprentice to learn how to judge the best quality fish. You can order sushi and donburi rice bowls à la carte, but if you’re dining in the evening, it’s best to leave things to sushi master Nishimori with an omakase tasting menu: for mainly sushi, choose the miyabi menu (¥11,000 / £85); for a wider range of seafood dishes, go for the tenrai (¥15,000 / £116). Make sure to book at least two days in advance. Lunch will set you back around ¥5,000 / £38.50.

Recognised by the Michelin guide to Hokkaido, at Rakuten you can enjoy Japanese pub classics done well. The dishes are designed to pair with the local and international wines on the menu. There is also a wide range of beers, sake, shochu cocktails and whiskies on offer. Being an izakaya (Japanese pub), the atmosphere is laid-back and friendly. For a taste of Japanese comfort food, try the house oden (¥1,100 / £8.50), which is essentially a hot pot made with vegetables, fish cakes and tofu simmered in a light dashi (kombu seaweed and bonito) broth. Other izakaya staples worth trying at Rakuten include grilled pork and chicken skewers (¥715 / £5.50 for five sticks), sashimi (from ¥1,100 / £8.50) and onigiri rice balls.

In 1952, Kurishima Torao opened chicken speciality restaurant Wakadori Jidai Naruto. He was from Awaji Island, near Kobe, so he named the restaurant after the swirling current in the Naruto Strait off the coast of his home island. Seventy years on, the fried half-chicken set lunch (¥1,155 / £9) with rice, pickles, tofu and miso soup continues to be loved by the people of Otaru. If you are struggling to choose between chicken and seafood, at Naruto you can choose a chicken set lunch combined with sushi or a seafood rice bowl for ¥1,700 (£13).

A little out of the centre, veteran chef Nishizuka Yutaka and his son Shuhei are creating the prettiest food in Otaru. The hana yuzen set (¥3,190 / £24.50) is a great-value introduction to what this father-and-son team can do. For dinner, order a kaiseki tasting menu (from ¥6,600 /£51) featuring sushi, plus beautifully presented dishes showing off a range of cooking techniques and the best of fresh, seasonal produce. They recommend their smoked oysters and eel in summer and fugu (pufferfish) in winter. The menu is designed to be enjoyed with their curated selection of drinks, which includes Hokkaido wines and sake, as well as beer and shochu from around Japan. 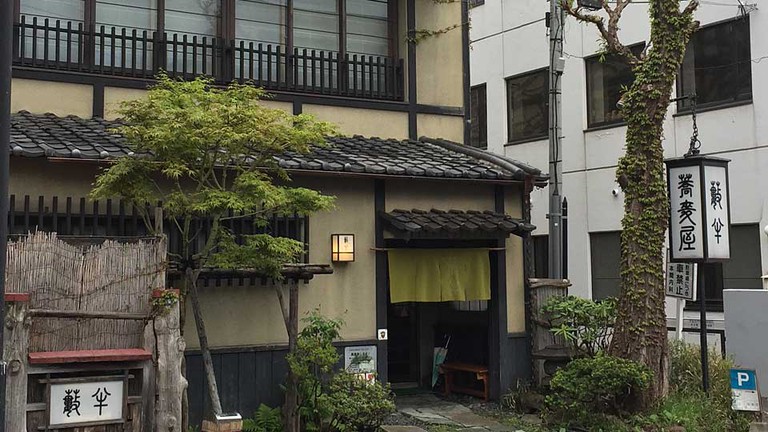 Set in a historic merchant house, Yabuhan is a vegan-friendly, gluten-free soba noodle restaurant less than a five-minute walk from Otaru Station. They’ve stuck with the same recipe since they opened in 1954, using flour that is 100% buckwheat. The restaurant serves a choice of two noodles; while the 100% Japanese buckwheat is the original, the mix of Japanese and American buckwheat flours is the cheaper option. The simplest dish on the menu is the classic kake soba, unseasoned buckwheat noodles that you drench in a flavourful dipping sauce made with kelp seaweed, bonito, soy sauce, sugar and sake and topped with Japanese leeks and wasabi (from ¥627 / £4.85). To make it vegan, switch to a seaweed-based broth, which is made without dried bonito fish. Otaru uni (sea urchin) is said to be the best in Japan, and Yabuhan is a great place to try it; the uni toji soba comes with egg, yuzu, Japanese wild parsley and uni (from ¥1,980 / £15.25).

Wakisaka Hideaki’s tempura proved such a hit that he opened up a second brick-and-mortar establishment. Located on Denki Koji Street Food Alley, this eight-person restaurant only offers Wakisaka’s top-selling dish – tendon rice bowls piled high with crispy tempura vegetables and seafood. Order the luxury tendon (¥2,640 /£20) to get a big tempura crab claw in your mix. But if you want to be served by the man himself, head to the main restaurant on Sushi-ya Street. Book one of the six counter seats and watch Wakisaka fry your tasting menu of eight tempura dishes (from ¥3,630 / £28, including a side salad; price varies depending on ingredients). In addition to the popular tendon bowls, here you can also order interesting à la carte combinations, like apple and cheese or aubergine stuffed with prawn or scallop. 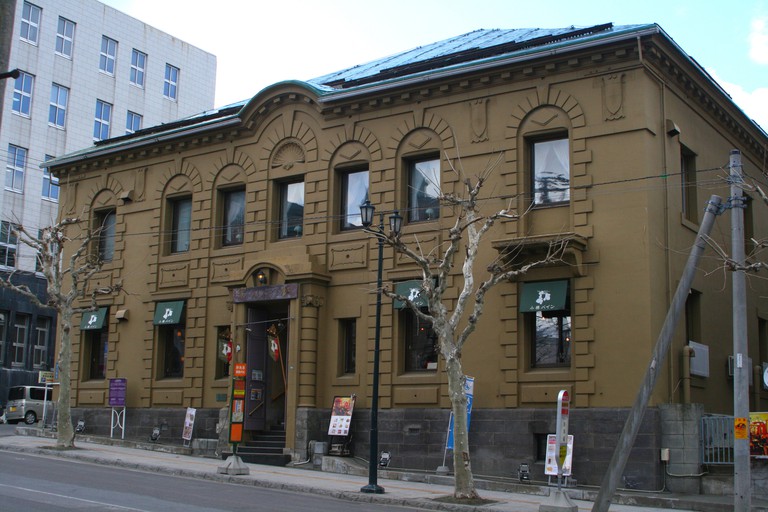 Considered an architectural icon of the city, this grand former bank is now an Italian restaurant with a menu focused around pasta, pizza and vino. Aiming to be the best place in the city to try Hokkaido wine, the owners named it BINE, a combination of the words ‘bank’ and ‘wine’. Pizzas here come thin and crispy, and are made with Hokkaido wheat. Toppings include Japanese venison and prosciutto cured locally. The open spaces and cool climate of the region are also perfect for dairy farming, the ingredients of which are best represented in the cheese fondue and pumpkin cheesecake. The drinks menu lists more than 70 Otaru wines and vintages from Furano and Yoichi, and even includes a selection of original wine cocktails. Budget around ¥1,000 (£7.70) for lunch, ¥2,000 (£15.40) for dinner and extra for drinks.

Tokaiya is a typical ramen house with counter seating and a short menu. Choose from soy sauce ramen (¥825 / £6.35), miso ramen (¥850 / £6.50) or – the bestseller – barbecued garlic pork miso ramen (¥1,050 / £8), and watch as the chefs prepare your dish right in front of you. The ramen is served with a spoonful of chilli miso paste on the side, so you can adjust the spice level to your liking. Don’t pass up a plate of six sizzling gyoza dumplings, known here for their perfectly crisp skin (¥550 / £4.25). Drink options are equally simple – there’s complimentary water, regular beer or non-alcoholic beer. With just 12 counter seats and the reputation as the best ramen house in town, lines are common, so arrive early.