An Insider's Guide to the Best Restaurants in Nagasaki 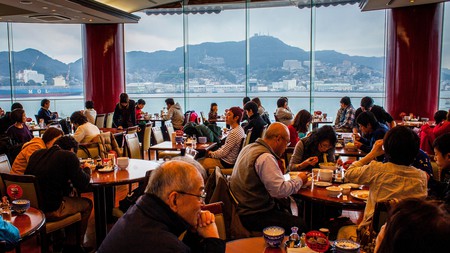 With its fusion of flavours and history, Nagasaki has one of the most vibrant food scenes in Japan. Its trading port history has left a rich gastronomic legacy, whether it’s Portuguese-inspired castella cake at Fukusaya or American-style Sasebo burgers from Hikari. Here’s where to eat on your visit.

Opposite Oura Cathedral stands Shikairou. This revered restaurant opened in 1899 and is credited with inventing Nagasaki champon – the city’s greatest culinary export. What is champon? The story goes that Chen Ping Shun, the cook at Shikairou, invented the dish to feed the throngs of Chinese exchange students hankering for a cheap meal. He based his concoction on Fujian-style noodles, added fresh vegetables, seafood and scraps of pork, then served it all up in a bowl filled with bone broth. Often served with a side of gyoza, champon is a godsend for anyone who has overindulged the night before, or those looking for an inexpensive yet satisfying meal.

In 1642, Kagetsu opened within the Hiketaya brothel. Courtesans were the only Japanese citizens allowed into the Dutch settlement in Nagasaki Bay, and these enterprising women created a culinary fusion – shippoku ryori. Served banquet-style, this cuisine bears the influence of Chinese, Dutch, and Portuguese settlers. Common dishes include tai (red snapper) fin soup, braised pork, and tempura. Thankfully the restaurant survived the 1945 atom bomb, and with its beautiful dining room and gardens it’s the smartest place in the city to sample shippoku dishes. It’s said that the missing chunk from one of the restaurant’s wooden pillars is the result of a drunken punch-up involving the legendary samurai, Sakamoto Ryōma. Reservations required.

If you have a sweet tooth, or admire beautiful confectionery, look no further than Fukusaya. Castella cake was first made in the city when a Portuguese merchant taught its founder the recipe. The Portuguese introduced refined sugar to Japan, and the presence of European merchants in Nagasaki meant that flour and sugar were much more commonly available here than in the rest of Japan. 400 years after opening Fukusaya is still going strong. Beautifully wrapped and presented at the store, castella is a chic present or souvenir of your trip – that is, if you can resist eating it as soon as you leave the shop.

One of Nagasaki’s most enduring but least understood specialties is the mysteriously named toruko (Turkish) rice. Combining spaghetti, rice, and pork tonkatsu with curry sauce all on one plate, toruko is unlike anything else. Nagasaki-ites have been hungrily swallowing this weird concoction for more than 60 years and it’s served all over the city. Traditionalists, however, stick to Tsuruchan, which opened in 1925 and is the oldest known café on the island of Kyushu. Unlike the city’s other great culinary inventions, toruko rice doesn’t seem to have caught on in the rest of Japan, so try it while you’ve got the chance.

Steamed pork buns – kakuni manju – are a modern twist on Nagasaki’s shippoku ryori cuisine. This delicious snack, in which thick pieces of pork belly are wrapped in a fluffy steamed bun and seasoned with a dab of searing yellow mustard, are a Nagasaki highlight. The place to try them is Iwasaki Honpo, a minute on foot from the Nagasaki Chinatown entrance.

Restaurant, Japanese
Facebook
Email
Twitter
Pinterest
Copy link
Share
Map View
Hitokuchi (bitesize) gyoza are a recent innovation in Japan, and are rumoured to have been invented in Nagasaki. These tiny dumplings offer the convenience of fast food with none of the mess – perfect for office workers in a rush. Try the best gyoza in Nagasaki at Unryutei, in Shianbashi. This tiny place, with two tables and a few seats at the bar, is dedicated solely to gyoza. Served piping hot, the dumpling skin is crispy and thin while the insides are loaded with pork and garlic. Delicious!

Eel is such a delicacy in Japan, most people would only consider ordering it at a specialist unagi restaurant run by an expert shokunin chef. Once you’ve tried this tender, fatty fish – lovingly grilled over charcoal – you’ll understand why. Available year-round, unagi is especially popular in summer, when eating it is said to fight off the oppressive heat and humidity. For the best samples, make your way to Izumiya in Shininchi Chinatown, which has been grilling eel for more than 160 years.

The hamburger was introduced to Nagasaki in the early 1950s, during the Korean War, and the small shops that popped up to serve the American military base in Sasebo were soon doing a roaring trade. Today, the Sasebo burger is something rather different. These handmade patties are noted for their use of the freshest ingredients, their meticulous preparation – and their size. Hikari opened in 1950 and is widely regarded as the finest Sasebo burger spot in Nagasaki, with all the satisfaction of the American original, and Japanese flair.

Restaurant, Cafe, Japanese
Facebook
Email
Twitter
Pinterest
Copy link
Share
Map View
What could be better on a hot day than a seat in this glorious garden, overlooking Nagasaki’s magnificent bay? The café, with its intricate iron furniture and stunning views, is the perfect spot to try kakigōri, a traditional shaved ice dessert. In line with the surroundings, this treat has a distinctly 19th century feel. Similar to a slushy or snow cone, the lightness of kakigōri is closer to the texture of freshly fallen snow, and flavours such as green tea with condensed milk give this dessert an elegance that transcends its simple ingredients.
Give us feedback