An Insider’s Guide to the Best Restaurants in Hiroshima 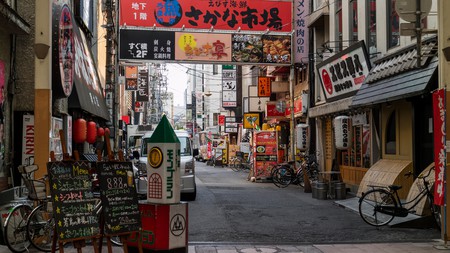 Many visit Hiroshima to learn about its history, but the city is also home to a huge range of cuisines and speciality food | © Picture Partners / Alamy Stock Photo

Most of Hiroshima’s visitors are drawn to the city to learn about its tragic past, with the Peace Memorial Park and Atomic Bomb Dome being two of its most-visited sites. While the history of Hiroshima is a crucial aspect of its culture for all travellers passing through, the city is also home to a huge range of delicious cuisines waiting to be enjoyed in its best restaurants.

Japan’s strong relationship with food has become one of the country’s most distinguishing aspects, with local specialities acting as major attractions to many of its cities and regions. Indeed, national travel is regularly based around trying new cuisine. Hiroshima is no different: the foodie hotspot is home to many speciality dishes and ingredients, including oysters, okonomiyaki (savory pancake) and onomichi ramen, and also has a number of international influences on its restaurant offerings. 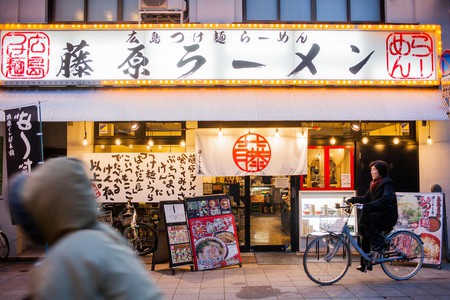 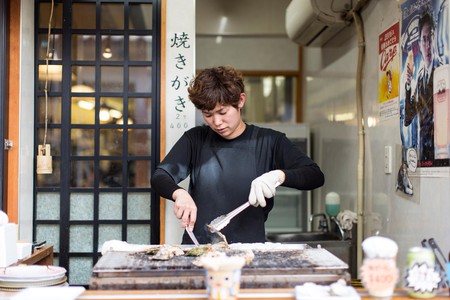 Located near the Peace Memorial Park, Heiwa Shokudō is considered one of the best food spots to try in Hiroshima. The restaurant draws in customers with its delicious take on Yōshoku (Japanese-style Western food). Western food has developed in Japan to the point that it has taken on its own title as a popular and staple cuisine. Somewhere between a fusion and an evolution of flavours from Japan combined with those of France, Italy, Russia and other European countries, it was introduced during the Showa and even Meiji periods. During the day, Heiwa Shokudō’s ​cream soda (melon-flavoured soda with vanilla ice cream and a cherry on top) served in a nostalgic anime glass, ​napolitan (a ketchup-based pasta) and the ​Ōsama lunch​ (literally ‘king’s lunch’ – a plate with all sorts of tasty morsels such as fried shrimp and omelette rice) are must-tries. At night, Heiwa Shokudō transforms into a Western-style bar with a dinner menu.

At Nakashima, Japanese hospitality is translated elegantly into a multi-course meal. Hiroshima’s only three-star Michelin restaurant, reservations are essential for the chance to eat here. And while a meal at Nakashima is more costly than at other places in the city, the all-encompassing food adventure that diners are treated to is well worth the extra yen. Not only is the menu seasonal and locally sourced – depending on the time of year, you may be served ​hamo​ (pike), ​Wagyu ​or octopus – but the restaurant’s owners have also taken special care with the aesthetics of the place, from the wooden tables to the pretty plates. With its limited seating, a visit allows for an intimate dining experience. At the time of your reservation, take the opportunity to express any allergies or dislikes, so that the chef can specifically cater your meal to your preferences.

A trip to Hiroshima is nothing without trying the prefecture’s famous ​okonomiyaki (savory pancake)​. The dish is typically associated with both the Kansai and Hiroshima areas of Japan, and to this day, people dispute whether they prefer the typical Osaka-style or Hiroshima-style versions of the dish. At Mori, which specialises in okonomiyaki, there’s no toilet, no air conditioning, and it’s only open for lunch until they run out of ingredients. However, this place is an absolute gem; having been running for over half a century, what it lacks in facilities it makes up for in taste, value for money and attention to detail. It even offers food to go, so you can take your okonomiyaki away wrapped up in foil and newspaper to keep warm until you’re ready to enjoy it.

If you are visiting Hiroshima between the months of October and March (and sometimes up until April or May, depending on the year), you’ll have the opportunity to try another of Hiroshima’s specialities: oysters. Being the biggest producers of oysters in the country, there are countless ​kaki goyas​ (oyster shacks) around the city, and even an “Oyster Road” – a suggested route that you can follow to try the best spots. For a great place to taste some for yourself, head to Milky Testuo’s, which is located in an open area in Hiroshima Minato Park near Hiroshima Bay and Ujina Island. The restaurant provides diners with their own little barbecues, as well as tongs, aprons and gloves, so you can really get into your oyster grilling. Don’t worry if you’re not too keen on oysters, though, as they have other food available, such as scallops, prawns, sausages and even buttered potatoes.

Originating in Onomichi City in eastern Hiroshima prefecture (hence the name), ​Onomichi ramen​ has made its way across the country and down to Hiroshima City. What makes ​Onomichi ramen​ different in flavour from a regular soy sauce-based ramen is their use of pork fatback, which is a crucial ingredient in their soup stock. Some restaurants also add a fried oyster to the noodle dish to make it that extra bit Hiroshima-esque. Arguably one of the best Onomichi ramen spots near Hiroshima city, Nakamura Seimen is cheap, simple and offers delicious, straightforward meals. As well as their famous ramen, the gyoza​ (dumplings) and fried rice are all recommended.

Popular Tenyoshi is a tempura​ speciality restaurant that also offers takeaway options. Try an impressive range of tempura from Tenyoshi’s extensive menu, from prawns and fish to okra and pumpkin. But don’t leave without trying the ​watarigani​ (soft-shell crab) tempura. Either choose your own mix of different tempuras or leave it to the chef to make a selection.

Musashibō Honten has proven incredibly popular in recent years, and the restaurant has now opened across Hiroshima, with five different locations around the region. They specialise in soup-less ​tantanmen​ (spicy noodles), and the original shop is located in Naka Ward. The version of ​tantanmen​ that is sold in Japan is inspired by the Sichuan dish of the same name, with a slight variation in flavour, which usually comes from adding more soy sauce or introducing other Japanese ingredients. Although tantanmen noodles are usually served with broth, in Hiroshima, it is common to enjoy these spicy noodles without any kind of soup. A classic Japanese ramen restaurant, meals at Musashibō are ordered from a vending machine, from which customers can purchase a ticket for their meal as well as the toppings they’d like to add. The ​onsen tamago​, a hot-spring-style poached egg, is an excellent choice. Select your spice wisely, though; levels range from “0” all the way to “DEATH” for those bold enough.

A sake bar-restaurant run by local brewing company Sanyoutsuru, customers return to Sourin again and again. They offer a wide variety of different sakes that can be tried in tasting sets of five or three, which is a great introduction for those who are new to the Japanese drink. For food, try Sourin’s version of ​bishonabe​ ​(sake hotpot), a dish that is exclusive to Hiroshima. Vegetables, seafood and pork are all cooked together in a sake-based soup stock, which makes for the perfect winter warmer. 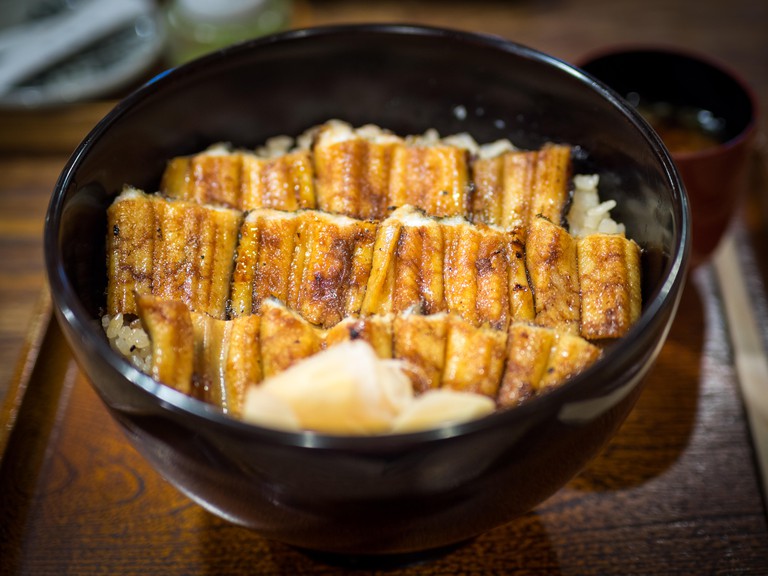 With over 120 years’ practise perfecting their flavours, Anagomeshi Ueno is a legendary place to try another of Hiroshima’s delicacies: ​anagomeshi​ (grilled eel over rice). Today the term anagomeshi is used all over the Hiroshima region, but it’s best sampled from the source. What differentiates ​anagomeshi​ from a simple grilled eel over rice is the ingenuity that has gone into infusing the simple but strong flavours of the eel and soy-based sauce into the rice – something that Anagomeshi Ueno has down to a fine art. The business started as a humble family-owned ​bentō​ (lunch box) shop at Miyajima train station, and they later opened a small teahouse at Miyajimaguchi train station. Today, with the family’s fourth generation in charge, the main shop, which is located in Hatsukaichi City, shows no sign of stopping. Due to a rise in popularity in recent years, a second shop was opened on the lower floor of the Mitsukoshi Department Store building in Hiroshima City. This location may be more accessible to people travelling only to Hiroshima City.