The Best Places to Visit in Japan During Spring 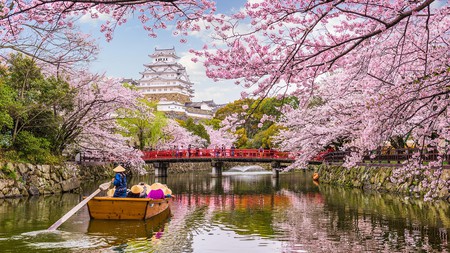 Cherry blossoms may have a reputation for being the main attraction during spring, but there are plenty of other surprises to discover in Japan. You just need to know where to look.

Springtime in Japan means so many things to so many different people. For some, the arrival of April marks the start of new, exciting beginnings: it’s when children head back to school, university students graduate and employees start their new jobs. Like New Year’s in many Western countries, spring is a time of unbridled optimism and a celebration of what the future holds.

If you’re after the full package, you can now travel with Culture Trip on a 12-day trip to Japan departing in spring. Otherwise, here are the best places to enjoy cherry blossoms and the season of new beginnings in Japan. 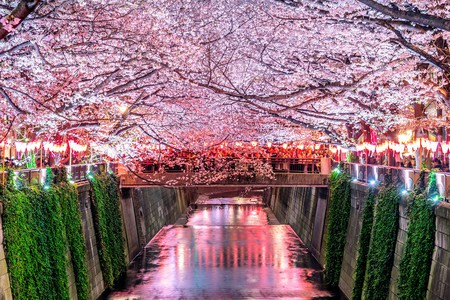 In terms of major cities, Kyoto is generally considered the most popular cherry blossom capital; however, Tokyo arguably gives the city a run for its money. Watching the soft pink blossoms carpet the inner city streets and paint the typically grey facades of office complexes in delicate pink spots is a sight to behold. Another thing Tokyo does best in the spring months is hanami parties (cherry blossom-viewing parties), where the locals get a little loose in some of the biggest parks in the city.

Head straight to Yoyogi Park just behind Harajuku. This super central park is overflowing with festive picnic spreads, music and food stands. You’ll also probably spot a few salary men enjoying their boozy weekday office parties. In the northeastern corner of inner Tokyo is the sprawling Ueno Park, another local favourite, home to about 1,000 trees that regularly blossom before the rest in the city.

Another place worth adding to the itinerary is Nakameguro, where you can stroll along the Meguro River. Be prepared to get swept along by a river of people though – it’s arguably one of the most densely populated cherry blossom haunts. 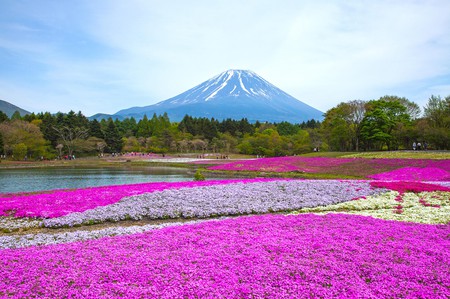 So you’ve seen the cherry blossoms and are on the hunt for a little variety? Hop on a train to Fuji Motosuko Resort at the base of Mount Fuji. Here, you’ll find a landscape that can really only be described as surreal. Fields of hot pink and pale pink shibazakura ‘pink moss’ flowers (officially known as a moss phlox) cover the rolling hills, backdropped by the snow-covered Mt. Fuji of spring.

To celebrate the arrival of this stunning scene, the Fuji Motosuko Resort holds an annual Moss Phlox Shibazakura Festival from mid-April to late May, where guests are welcome to stroll through the grounds.

The bubblegum mountains of Yoshino 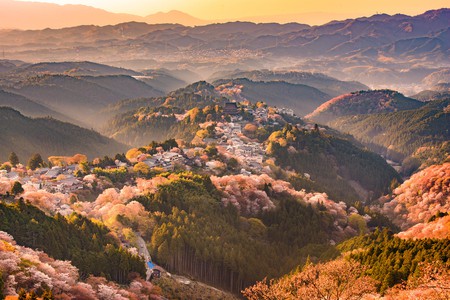 The trees in Yoshino are said to have been planted more than 1,000 years ago | © Sean Pavone / Alamy Stock Photo

Yoshino is known across the globe as one of the best cherry blossom destinations in Japan and is definitely an important addition to any springtime traveller’s itinerary. The story of Yoshino states that many of the trees here were planted around 1,300 years ago.

Today, there are an estimated 30,000 trees that call the hills of Mt. Yoshino (known to the locals as Yoshinoyama) home. As is the case with many other popular blossom hangouts, this place does get busy during peak season, so try to avoid coming here at the weekend.

Spring cycling along the Shimanami Kaido

One for the more adventurous traveller, Shimanami Kaido is a popular cycling route that takes the form of an impressive 60km (37mi) long road that connects the southern island of Shikoku to the main island of Honshu. From point A to point B, the bridge skims across a number of small islands that peak through the sapphire blue waters, making for one of the most picturesque bike rides you’ll ever take.

Given the harsh dry winters in Japan, almost unbearably humid summers and at times unpredictable early months of autumn, it’s best to make this journey in spring when the weather (and surrounding views) are at their best.

The magic city of Matsuyama

If you do make the journey from Honshu to Shikoku, it’s worth stopping off at the historic castle town of Matsuyama. Matsuyama is the capital city of Ehime Prefecture, and home to Dogo Onsen, the onsen responsible for inspiring the Ghibli classic Spirited Away (2001). It’s an excellent place to relax, unwind and soak in the mineral-rich hot spring waters. This side of Japan has not yet been influenced by the Western tourist market.

To top off the trip, make your way to the stunning Matsuyama Castle, one of the country’s last remaining original castles. It stands atop Mount Katsuyama overlooking the city, offering panoramic views. While this castle is a sight worth seeing all year round, it’s especially impressive in spring as the surrounding cherry trees bloom into action, framing the castle with their classic soft pink silhouettes. 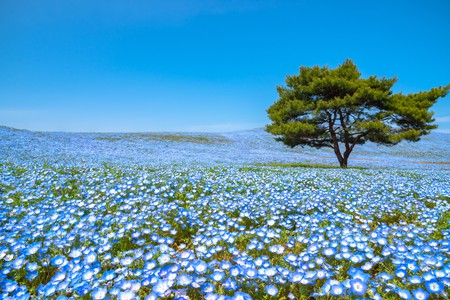 An easy day or weekend trip from Tokyo, Ibaraki is a countryside prefecture that has a lot going for it, especially in spring when popular Seaside Park comes to life. An ideal location for spotting spring flowers beyond the typical cherry blossom tropes, the 350ha (864 acre) park is home to almost psychedelic shades of red, blue, green and everything in between.

Sitting on the opposing side of the colour spectrum from the sakura flower, the park’s most famous flora is the blue nemophila, a baby blue flower that covers Miharashi Hill in spring, creating an illusion that’s almost like a reflection of the cloud-free skies above. Once you’re done strolling through the site, be sure to pay a visit to the on-site amusement park, which has more than 20 rides and attractions including a 100m (328ft) high ferris wheel. 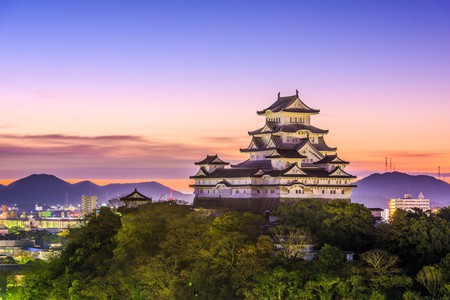 The Takeda Castle ruins in Asago City, Hyogo Prefecture, are often referred to as the Castle in the Sky or the Machu Picchu of Japan. On foggy mornings, they look like a castle floating on the low-hanging clouds that sweep across the land.

Impressive in its decaying beauty all year round, there are two seasons during which the ruins are at their best: in autumn when the air is super thick with fog, and spring when surrounded by a smattering of cloud-like pink sakura flowers. Beyond the floating castle, the Hyogo area is home to a huge selection of other incredible cherry blossom viewing spots; one you can’t miss is the pearly white-walled Himeji Castle, the most famous castle in all of Japan.