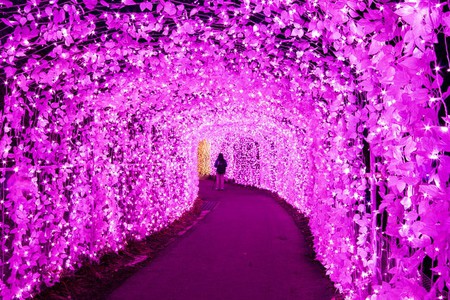 Japan celebrates the traditional holiday of Christmas in some pretty different ways. But arguably one of the best things about the holiday season here is the illumination displays which fill streets across the nation with magical, merticuliously-curated LED light displays. Festive and unique enough to draw you out into the freezing cold, here are a handful of some of the best displays you can’t miss during this winter season.

Travelling down the 250 metre-long pedestrian pathway that connects NHK headquarters with Yoyogi Park is the breathtaking Ao no Dokutsu illumination (which translates to “blue cave”). The towering zelkova trees that border each side of the walkway are coated in glowing blue LED lights which bounce off the reflective sheet that is laid out down the walkway’s centre. Previously the event was held along the Nakameguro river, however, this year it’s moved to Shibuya and expects to attract more than 2.4 million visitors in total during the illumination season.

Tokyo’s ritzy pocket of Roppongi is home to two impressive sets of illuminations, making it the best way to double your light spotting in half the time. Tucked behind Roppongi Hills is one of the city’s most popular strolling spots. Filled with rhythmic glowing LED displays, each year is slightly different.

Famous for the ‘Starlight Garden’ lights that occupy the Midtown Garden, this little lit-up hotspot is home to 100,000 blue LEDs and a ‘Vision Dome’ light show that projects the starry night sky over this romantic corner of the city.

TOKYO TOP ILLUMINATIONS: Tokyo Midtown 🌠 The Tokyo Midtown illuminations is famous for the 'Starlight Garden' lights that involves multiple illumination areas around the Midtown complex, creating a magical, wintery atmosphere with over 100,000 blue LEDs. 🎇 The light-up event will take place from Nov. 15th to Dec. 25th from 5 PM to 11 PM daily in the park behind the main tower of Tokyo Midtown in Roppongi. 📷: Stunning photo by @genki_photo

Caretta Shiodome mall is probably overlooked by many passing guests, as it sits between the high-rise offices and fancy hotels of swanky Shiodome. However, during winter it’s one of the Tokyo’s most well-trafficked walkways. This, its 12th year will feature over 250,000 LEDs coming all synched up in 20-minute long shows that run from 5pm until 11pm daily.

One of the top four largest winter illuminations list for the Greater Tokyo area, the Seibuen Yuenchi Illumi display in the Tokorozawa based amusement park draws hordes of locals and guests to the area each year. This year’s edition sees around three million lights on show, even the local merry-go-round is lit up in 12 different colours.

Known as the biggest illumination event in all of Japan, Sagamiko Illumillion in Kanagawa, the northern part of Kanto boasts a whopping six million colourful LED lights that all link up to really create something spectacular. The show is broken up into 10 sections that each focus on a different theme. Last year there was a 20-metre tall ‘Splash Swan’ and a ‘Grand Tunnel of Light’, and this year promises to top that once again.

Though it may be a little small in size compared to other events, the Hakodate Illuminations are by no means any less beautiful. With the city streets dotted with about 50,000 lights, what makes this spot so special is the way the natural beauty of the area works in harmony with the light. When the city’s seasonal lights bounce of the fresh, pillowy snow that’s almost constantly piled up on the ground, you’ll think you’ve drifted off into illumination heaven.

🇯🇵 Hello from Japan 🇯🇵 Our attempt to take in a panoramic view from the summit of Mount Hakodate during sunset this evening was thwarted as heavy winds caused the closure of the cable-car system there. Instead, we took a drive around, and enjoyed this view of the Hakodate Illumination from atop Hachiman-zaka Dori. #htit #hokkaidotravel #lovehokkaido #hokkaido #hakodate #hakodateillumination

A post shared by Singaporean Gran Turismo (@singaporean_gran_turismo) on Feb 1, 2017 at 4:53am PST

An interesting Osaka fact is that in 2014, the Midosuji Illumination was officially awarded the impressive, though very niche record for having “most roadside trees illuminated”. Stretching four kilometres from Umeda to Nanba, this is one of the city’s best, and hardest to miss.

Not to be beaten by Midosuji Illumination, Osaka’s other illumination event is equally as impressive. Stretching all the way from City Hall to the eastern point of Nakanoshima Park, this light show sees a number of historic buildings emblazoned in light, as well as art installations and projection mapping.

Located not too far from Osaka is the neighbouring port city of Kobe, famous for beef and now possibly illuminations. This event is in fact a memorial to the victims of the Great Hanshin Earthquake of 1995 (also known as the Kobe earthquake), which saw 6,434 people lose their lives, around 4,600 of whom were from Kobe. It was originally held as the year of the devastation, and today, 22 years later, is still shining bright, signifying the city’s unwavering strength and resilience.

Known as the biggest winter illumination event in eastern Japan, Tochigi prefecture takes place in the same location as the area’s famous wisteria flower gardens. Every year for the past 15 years the area has been set aglow by millions of incredible lights, and this year is no different. Three-and-a-half million lights will illuminate the garden making it stunning by day as well as by night.

For a more unique Japanese Christmas, make your way to the beach-covered prefecture of Okinawa for a slightly more summery holiday season. Here, in celebration of New Years, the Toyosaki Seaside Park is filled with a variety of different LED illuminations, including a 100-metre-long illumination tunnel, 10-metre-high symbol tree. This show runs from mid-December, but it’s really on New Year’s Eve that the Chura Sun Beach (on which the illuminations are located) hits its peak.