The Best Places for Persimmon Leaf Sushi in Nara

The Best Places for Persimmon Leaf Sushi in Nara

Nara Persimmon Leaf Sushi | © Jun OHWADA/Flickr
One of the most charming points of Japan is that every prefecture has its own local specialty cuisine, like beef in Kobe and takoyaki in Osaka. Nara prefecture is no exception with their famous pressed sushi wrapped in persimmon leaves called kakinoha sushi. Customarily made with mackerel, today a variety of fish are used. When in Nara, make sure to stop by one of these stores to try the best persimmon leaf sushi in Japan.

Restaurant, Japanese, Sushi, $$$
Tanaka is one of the most famous restaurants to get kakinoha sushi in all of Japan. With a shop right next to Kintetsu-Nara station, it’s also one of the easiest to grab a package of sushi to go or to have lunch before a day of sightseeing. They offer limited lunch sets every day that serve a beautiful assortment of sushi along with persimmon leaf sushi and a bowl of soup for only 1,080 yen (US $9.70).

Cafe, Japanese, Sushi, $$$
Yamato | © Kuruman/flickr
The Nara city branch of Yamato is the perfect place to pick up persimmon leaf sushi for a snack or as a souvenir. While they have the regular mackerel, salmon, and red snapper, they also make a seven color flavor, or ajinanairo, version. This is their best selling persimmon leaf sushi with the standard three flavors, plus small dried shrimp, sea bream, seabass, and ground meat. This variation is meant to be a fun way to “taste the seven colors”. Yamato also sells beautifully packaged rice bowls and sushi sets that are popular in Nara as bentos. 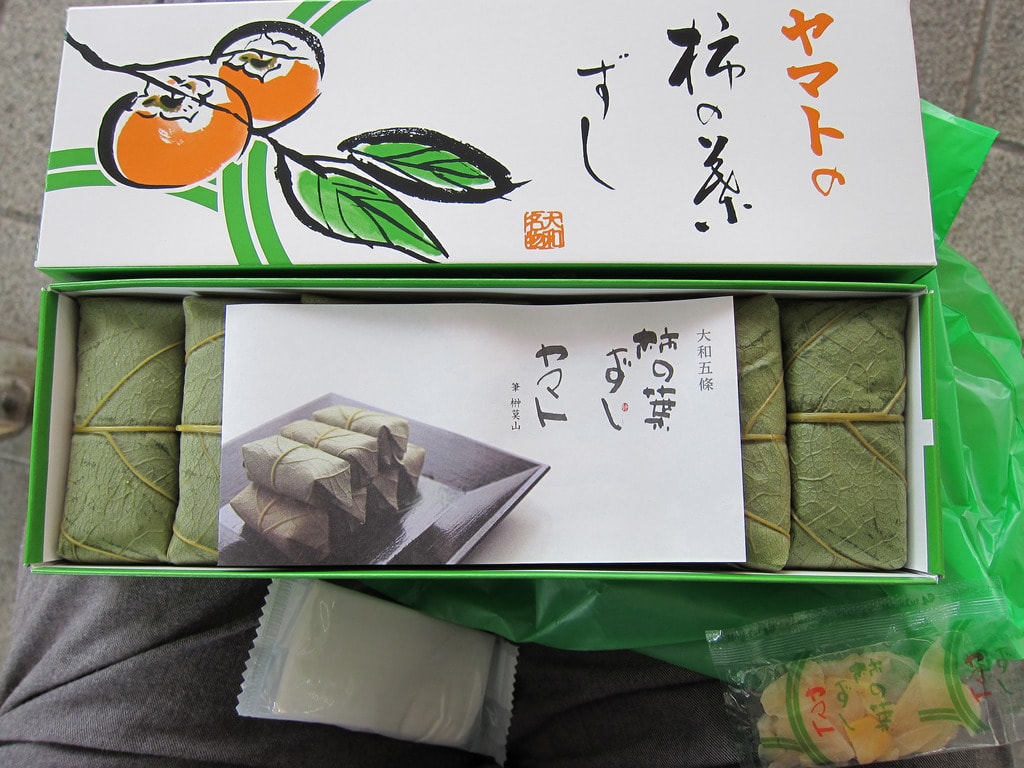 Restaurant, Japanese, Sushi, $$$
Hirasou is one of the oldest persimmon leaf sushi companies in Nara. Founded near the Yoshino area 150 years ago, its sushi has been delighting locals and travelers alike ever since. There are four branches in Nara that sell sushi, but the only restaurant is at the Imamikadocho location. While the sushi is the most well known, they also serve other regional Nara specialties. Cha-gayu is a rice porridge made with green tea that is said to improve ones health. They also make ayu sushi, an extremely popular Japanese river fish served whole on top of sushi rice and then pressed flat.

Restaurant, Japanese, Sushi, $$$
Izasa | © sstrieu/flickr
The Izasa Yume-kawa branch is the perfect place for people checking out Nara Park. The first floor sells sushi packaged to go, including kakinoha sushi and their specialty, Izasa sushi pressed in bamboo leaves. The second floor has spectacular views of Todaiji and Nara Park, but it is popular, so get there early for the best seats. Besides sushi, the restaurant has traditional Japanese dishes like somen and lovely limited lunch sets of sushi, as well as tempura and seasonal side dishes. 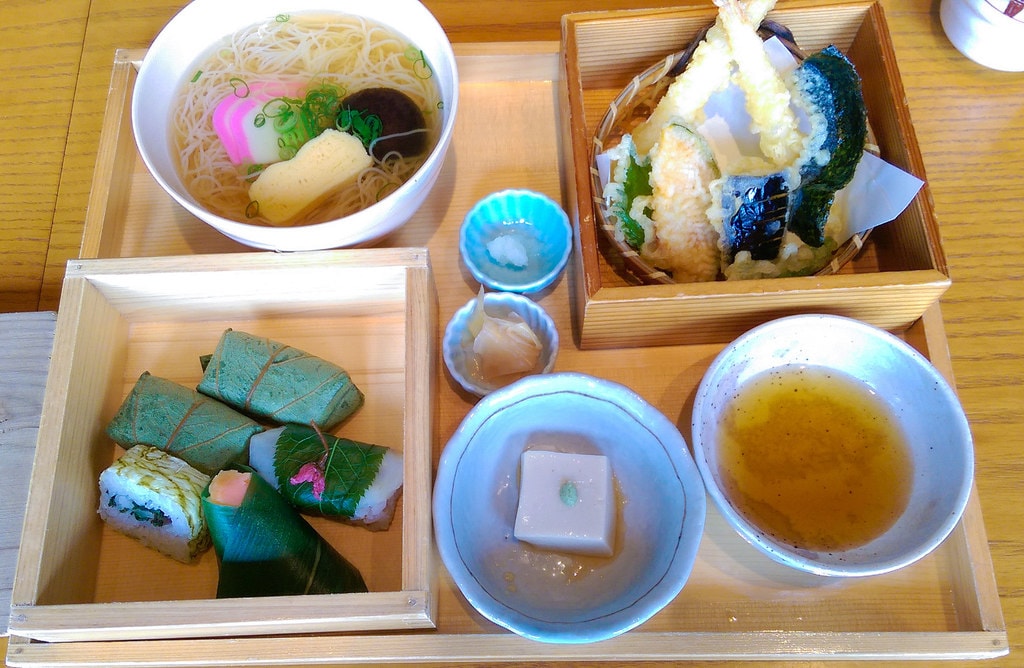 Restaurant, Japanese, Sushi
Umemori is another popular place in Nara to get the persimmon leaf sushi, but they offer their own variation as well. Instead of a persimmon leaf, they wrap rice balls in wasabi leaves and then top them with fish. Unlike the persimmon leaves, wasabi leaves are edible and add a nice spicy bite to the sushi. One of the coolest things about this sushi restaurant is that it is halal-certified. This is an extremely rare thing to see in Japan and it’s great that Umemori has gone out of its way to provide Muslims a great place to try Nara’s regional cuisine.