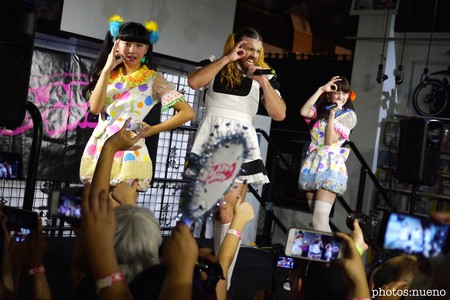 From AKB48, to Babymetal to Perfume, J-Pop is gaining traction thanks to its ridiculously diverse interpretation of the pop genre. Whether you’re a fan of R&B, experimental electro, super sweet ballads or thrash metal, odds are there’s a J-Pop band to cater to your taste. Here’s a guide to the most exciting bands of 2017.

Only in Japan could a band like Deadlift Lolita exist, and thrive. Comprising of Ladybeard aka Richard Magarey -a cross-dressing Australian wrestler and ex-member of Ladybaby – and Reika Saiki, a Japanese professional wrestler and J-pop vocalist, the two-piece fall under the Kawaii Metal genre, also know as Idol Metal. A mixture of thrashy metal and cute pop, Deadlift Lolita are weird and loud, but totally lovable.

Also known by fans as simply The Second, Exile the Second this year released Summer Lover as the perfect feel-good soundtrack to steamy Tokyo nights. Formed by ex-members of the massive 19 member J-Pop band Exile, which disbanded in 2001, Exile the Second prove that sequels can be as good as the original.

Originating from Hiroshima prefecture in 2000, Perfume have become culture icons here in Japan. The three-piece met and formed while attending talent academy Actors School Hiroshima. Now 17 years on and they’re still selling out massive arena shows, both here and internationally. The band’s longevity can be attributed to their ability to maintain a fresh approach to pop, flawlessly incorporating dance, synthpop, bubblegum pop, techno, and house music into their music.

This hip hop-pop trio met while attending a vocal and dance school in Osaka back in 2002. Quickly becoming good friends, the group started out doing live street performances, on the street performance strip of Shiroten, in Osaka Castle Park. Originally a four-piece calling themselves Remix, the band debuted their new name Lead with a performance in July 2002 in Osaka Castle Park which saw a massive 7,000 fans attend. Since then they’ve lost a member, but continued to amass fans across the country thanks to their high-energy performance and flawless pop-rap delivery.

Potentially the nation’s most famous J-Pop group, and definitely the world’s biggest, the 130 member collective AKB48 have become nothing short of a pop phenomenon. Formed in 2003 by Yasushi Akimoto, the group is named after Akihabara, the home suburb of the band. They were conceived because Akimoto wanted to form an accessible girl group with their own theatre where fans could see performances daily. Lucky there are so many members, because these days the band still perform almost every day at their home theatre in Akihabara, while continuing to release a consistent string of pop gems and simultaneously touring the world.

The Nogizaka46 are the rival band to AKB48. Also a brainchild of Yasushi Akimoto, the pop juggernaut formed in 2011 and were named after the Tokyo suburb of Nogizaka, the location of the SME Nogizaka Building, home to Sony Music Japan’s office. What makes this group so interesting is their marketing. Akimoto has created a number of other AKB48-style groups including Keyakizaka46 and the Osaka based NMB48, however they’re considered ‘sister groups’ to AKB48, while as the story goes Nogizaka46 is the ‘rival’. So are you team Nogizaka46 or Team AKB48?

Though it’s a genre that’s been making waves in Japan for a little while now, J-Pop trio Babymetal are arguably responsible for bringing Idol Metal to the world stage. For those unaware, Idol Metal is a hybrid genre of pop idol style vocals with metal instrumentation. Their 2016 album Metal Resistance received rave reviews from international critics, and peaked at number 15 on the UK Albums Chart, the highest position reached by a Japanese band ever. What’s so amazing is that all three vocalists didn’t even know metal music was a genre before the band began.

Teetering on a number of genres, Suchmos are a little more unclassifiable, however they do dip into the J-Pop world. Getting their name from US jazz musician Louis Armstrong’s nickname ‘Satchmo’, the band wear their R&B and jazz influences on their sleeves. The group formed in 2013 and since then have released two albums bringing western influences of rock, blues, and funk to the world of J-Pop.

This electro pop influenced duo proves straight up that J-Pop can be a little bit dirty. Consisting of Japanese-American actress and singer Emily Kaiho, and Japanese idol Hiro Todo, the story of their formation is still a mystery to all. Heavily concept driven, FEMM actually stands for Far East Mention Mannequins. As the story goes, Kaiho and Todo are the leaders of the FEMM Agency Syndicate, a fictional agency that rights for the rights of mannequins across the world. Their single FxxK Boys, Get Money made waves in 2014 and established the group as a J-Pop group to keep an eye on.

Though only forming in 2013, Faky have already lost two members, gained a new member, gone on hiatus and a returned. Between all that drama they’ve also managed to amass fans worldwide thanks to their internationally influenced R&B pop sound. Their global sound is a result of the group’s diverse background. In their current state Faky consists of New Zealander Anna, LA export Akina and two Japanese natives Lil’ Fang and Mikako.