The Best EDM Festivals Around Tokyo 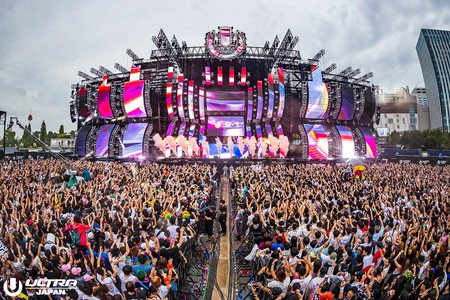 Although they have a lot fewer daisy chains, glow sticks and muscle shirts, dance music festivals in Japan are a big deal. Many may not know it, but the country hosts an eclectic roster of dance music festivals covering all genres under the electronic music umbrella: house, EDM, bass, and techno. If you’re in town and want to check out the scene, here are some of the best events close to Tokyo.

Born in Miami, the Ultra name now has events across the globe. The local leg of the Ultra Worldwide festival collective, Ultra Japan started as a two-day event in 2014 and has quickly become one of the biggest music events on the country’s calendar. It’s now so massive that it takes place over three days in mid-September, drawing a crowd of over 100,000 attendees each year. The event is held on three stages dotted inside Tokyo’s Odaiba Ultra Park, and features the biggest names in EDM, techno, dubstep and everything beyond, as well as plenty of homegrown talent.

Electric Daisy Carnival, more commonly referred to as EDC, is another international event that’s made a home here in Japan. The main ‘flagship’ event is held each year in Las Vegas, Nevada in mid-May, while at the same time it visits Zozo Marine Stadium and Makuhari Beach Park in Chiba, Tokyo. What has made this one of the country’s most popular events are the big name dance acts that grace the stage, like Tiesto, Steve Aoki, and Deadmau5, and the work that goes into creating the stages. Meticulously designed with fireworks, millions of light globes and carefully crafted details, they’re nothing short of a work of art.

Held during the Golden Week national holidays in May, Rainbow Disco Club is essentially the antithesis of the the mega inner-city EDM blockbuster events. Tucked just a few hours south of the city at the beachside hub of Higashi-Izu, it’s a laid-back, three-day disco and house music party. Very popular with young families and those who like to take it a little easier, the camping festival is held on two stages, an outdoor one during the day, and an indoor stage at night. In previous years, some of the scene’s most popular names have played here including Floating Points, Four Tet, and DJ Nobu.

To say there’s a very strong air of mystery that surrounds Labyrinth would be an understatement. Much loved and respected by those in the know and basically unknown to those outside of the techno scene, the festival is so confident in its legacy and reputation that in 2018 it decided to not even release the line-up. Located just a few hours from Tokyo in Niigata Prefecture’s Naeba Greenland, the festival runs in September, meaning that practically each year it is hit by a typhoon, but according to those who visit, that’s all part of the fun.

Held in the scenic surrounds of Chiba’s Shirahama Flower Park, Zipang is smaller sized festival that runs between late June and early July. Here you can expect a techno and house music affair with a very strong focus on visual art and expression. In previous years, local dance music heroes like Gadoro, Kenta Hayashi and DJ Nobu have been just some of the figures commandeering the musical direction of the event.

Surrounded by the lush mountains of Nagano, about a three-hour train ride from inner-city Tokyo, Rural is one of the dance festival scene’s quiet overachievers. The event has been running for over a decade now, and is gathering an increasingly loyal fan base each year. Held over three days in mid-July, the camping festival curates line-ups featuring some of the most popular and most exciting emerging names in the techno scene.

Freedom Sunset is a one-day, family-friendly dance party held on the island of Enoshima, about an hour and a half from Tokyo. Running for over 15 years now, this event hosts a rotating roster of acts that include both DJs playing disco and house sets interspersed with live bands. What’s particularly special about this celebration is its location. The event is hosted on the grounds of a sacred shrine-dotted island overlooking the sea and backdropped by Mt. Fuji, which makes for an incredible scene at sunset.

Tokyo Bass Festival is not strictly an annual festival, but rather an ongoing series of parties held by bass music-loving collective Tokyo Bass Music. Throughout the year the collective runs events featuring both international and local players in the local bass music scene, but Tokyo Bass Festival could be considered their flagship event. The best way to stay updated on the upcoming festivals is to keep an eye on their Facebook page.