The Best Cafés and Restaurants in Asahikawa, Hokkaido 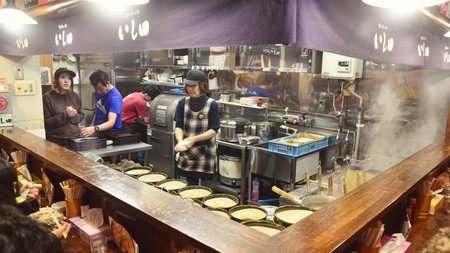 Often overlooked as just a transport hub, Asahikawa offers plenty of reasons to linger for a few days. Located in the centre of Hokkaido and well connected, the city’s cafés, restaurants and izakaya (Japanese-style bars serving food) can draw on all the island’s resources, everything from fresh seafood to rich dairy. Covering everything from rich, salty ramen to vegan cuisine using fresh vegetables from local farms, here are just a few of the best places to eat in Asahikawa.

Located near Tokiwa Park, along the partially pedestrianised Hikari no Ehon-dori (also known as Ryokudo, or Green Street), Sünusu makes a cosy spot to while away an afternoon. Take a seat at the long communal table, or one of the counter seats or squishy armchairs, and tuck into a plate of fluffy, eggy pancakes (all around ¥1,000 (£7)) – the honey lemon and caramel choco banana flavours are particularly good. Try haskap tea on the side, made with a berry popular in Hokkaido. If you like the Scandinavian style of the café, head downstairs to the shop, which sells vintage goods with a focus on Scandinavian kitchen items and tableware.

Downtown Switch Flavor is one of the city’s cosiest cafés, with its low lighting and wood-beamed ceiling. Most seats feel pleasantly private, surrounded with heavy wooden shelves heaving with books, and there are often soft blankets on hand for customers’ use. With its late hours (it only opens at 6pm) and library-adjacent atmosphere, Switch Flavor is popular with students, but it’s also a great low-key alternative to a bar. The menu sticks mostly to hot drinks and sweet treats (the spiced hot chocolate is excellent on a cold day), but there is also alcohol available.

Roughly a five-minute walk from Asahikawa Station, and just a block away from the pedestrianised thoroughfare of Heiwa-dori, Sorairo is a light, bright and welcoming café decorated in pale woods and dotted with greenery. As well as simple lunch dishes, the menu features hot drinks and sweets – the matcha parfait alone is worth the climb to the seventh floor. The space also contains a small shop selling cute homewares and stationery and a terrace used on sunny days. In the evening, the café turns into a laid-back bar.

On Hikari no Ehon-dori, just a few doors down from Sünusu, Harunire has a welcoming atmosphere and serves light, nutritious lunches and snacks. The menu changes frequently, but usually includes a range of hot and cold dishes from salads to curries with wild rice, plus drinks such as hojicha (Japanese twig tea) and soybean coffee. It also often hosts community events promoting local businesses.

In the northeast of the city is Palemta, a café, shop and gallery attached to the Asahikawa Design Center, where 30 local craftspeople and furniture makers sell their creations. Unsurprisingly, the café is beautifully designed, featuring light woods complemented by bright splashes of greenery, and with a harmonious jumble of different furniture dotted around the space. The regularly changing lunch and dinner menus feature varied global cuisine, but always with a focus on local ingredients and plenty of vegetables.

Asahikawa is famous for its shoyu (soy sauce) ramen, the slightly al dente noodles served in a salty, oily broth and usually finished with sliced pork, bamboo shoots and other classic ramen toppings. There are plenty of specialist shops dotted around the downtown area, but if you head to the eastern part of the city, near Minami-Nagayama Station, you can try them all in one place. Asahikawa Ramen Village houses branches of eight of the city’s best ramen restaurants, such as Aoba – the classic choice, based on a stock made from meat and seafood – and Ittetsu-an Matsuda – with a stronger fish flavour, and slow-cooked char siu pork. A bowl at each restaurant generally costs under ¥1,000 (£7), less if you go for the mini bowls, so you can try several before deciding your favourite.

Ramen, with its pork-based broth, isn’t usually a great option if you’re following a halal, vegetarian or vegan diet. But at Ichikura, the menu (which is also available in English) caters to all these groups, even listing the ingredients in full, as well as serving the archetypal Asahikawa ramen. As a result, it’s usually packed with travellers from overseas, but don’t let this put you off – the food is made with pride and attention to detail. The welcoming restaurant is right in the middle of downtown, and most dishes come in around ¥1,000 (£7).

For a change from ramen, head to this chic soba restaurant and izakaya in the city centre. Open for lunch and dinner, and turning into a stylish bar after, Yukiya is a cosy and intimate space, with room for a maximum of 26 customers. The menu focuses on juuwari soba (noodles made with 100% local buckwheat; they’re gluten free, but the broth contains soy sauce so the soup isn’t) and fresh, crisp tempura. A filling lunch of mori soba or kake soba (cold with dipping sauce or hot in broth, respectively) costs under ¥1,000 (£7).

The name of this izakaya may be “northern drinking place”, but it’s well worth visiting for a meal as well. Located at the end of Furariito (“staggering/weaving”) alley, with its array of izakaya, Kita no Yoridokoro offers a wide-ranging menu of Japanese classics – and an equally long menu of beer and sake. Try the Hokkaido specialities on offer, such as grilled potatoes with butter and salted squid (around ¥500 (£3.50)) or Genghis Khan (lamb and vegetables cooked on a helmet-shaped grill; around ¥1,000 (£7)), and pair with an Asahikawa sake (the menu features Otokoyama, Takasago and Taisetsu no Kura).

The focus of this unpretentious downtown izakaya is clear as soon as you enter – the stairs down to the basement dining area are decorated with nets, old-fashioned glass buoys and other fishing equipment. You can try Hokkaido’s famous crab, grill oysters at your table or go for something simpler like one of the well-priced rice bowls (tuna sashimi with shredded omelette over rice ¥890 (£6.30)). There’s a slightly abridged English menu, but this izakaya is more likely to be filled with businessmen out for a boozy post-work meal than tourists.