The Best Bars in Fukuoka, Japan 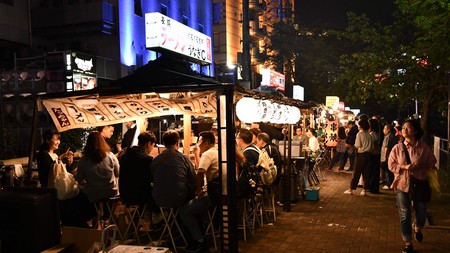 Sing karaoke, learn how to salsa and sip on award-winning cocktails at Fukuoka’s best bars.

Fukuoka is the largest city in Japan’s southwestern island Kyushu, and when it comes to bars it’s full of surprises. Whether you fancy trying a glass of homemade infusions, a salsa class or just want to make some friends – you’ve come to the right place. 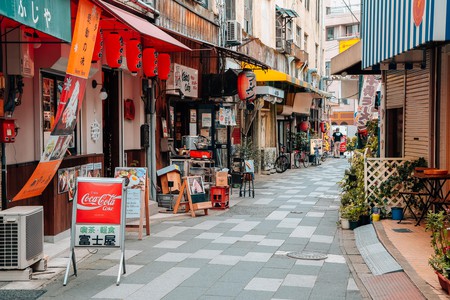 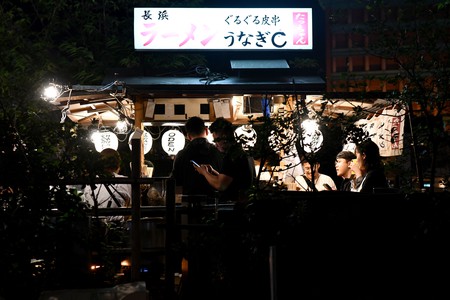 Fukuoka is well known for its yatai, small night-time eateries that pop-up every evening | © TOSHIFUMI KITAMURA/AFP via Getty Images

Fukuoka is well known for its yatai, small night-time eateries that pop up every evening. They usually serve traditional Japanese dishes, but this yatai offers something slightly different. Order a coffee-infused shochu and watch the world go by from inside this intimate venue that seats around seven people. Hours are irregular and weather dependent, so check their Twitter page for the latest.

Oscar’s Bar, run by Shuichi Nagatomo, is one of the most well-known cocktail bars in Fukuoka. It’s a classy place in the heart of Daimyo, a trendy shopping district. The bar is located on the sixth floor of an office block called Stage 1 Daimyou and has beautiful views of the surrounding neighbourhood. Nagatomo trained in Tokyo under Kazuo Uyeda, who invented the “hard shake” technique, designed to mix drinks without breaking up the ice, thus preventing dilution. Go here to see the technique performed first-hand, or to try Nagatomo’s signature drink, the Four Leaf Clover. It’s a delicious mixture of whisky, melon liqueur, grapefruit juice and lemon juice that won him first place in the 1994 Suntory Cocktail Competition. Look out for the large “STAGE 1” sign at street level to locate the bar. Drinks start at around 1000 yen.

Bar Sebek is an intimate, 10-seater bar in Nakasu run by Makiko Ohtsu. Everything about the bar is chic and elegant, down to the handmade glasses. Her gimlets are very popular, but Ohtsu’s original cocktails are what makes Bar Sebek really worth the trip. Her Tourbillon, a combination of brandy, red tea and yuzu powder, even won her the national Hennessy XO Cocktail Competition in 2017. Bar Sebek is located down a narrow alley and is marked by its black-and-white logo of a crowned alligator.

This laid-back international bar is a great place to meet people. The staff are bilingual, friendly and constantly host events. Karaoke, 100-yen shot nights, D&D – C.C. Cafe has it all. The bar is on Fukuoka’s aptly named Oyafuko-dori, or “unfilial child street”, the heart of the city’s clubbing scene.

Buy a craft beer, some bean-to-bar chocolate and really settle in to listen to music at this cosy bar. Between the paraphernalia on the walls and squashy sofas, Petrol Blue feels a little like hanging out at your friend’s house, if said friend had a fantastic collection of vinyl records and whisky. Want to get a feel of the vibe before you go? Listen to their latest playlist on Spotify. Check their Facebook page or website for hours, and bring cash since they don’t take cards. Petrol Blue is on the fifth floor of Daimyo Eito Building (大名エイトビル) near Plaza Hotel Tenjin. Look out for the Thai flag at street level.

This microbrewery serves up craft beer made in-house and on-site. Opened up in collaboration with El Borracho, a local Mexican restaurant, you can enjoy an ever-changing range of local and international craft beer here, alongside tequila and tacos. Not sure what to choose? Get a flight to try their latest selection. They have an English menu, which is uncommon in Fukuoka.

Citadel is the place to go for some of the most unusual drinks in Fukuoka. If you can dream of it, they’ve tried it. Bartender and owner Yoshimitsu Obara offers a constantly changing line-up of homemade alcohol: from browned butter rum to chicory root gin, it seems like there’s nothing he can’t make. Go in with an open mind and a sense of humour. Look out for the sign at street level, opposite Butabara.

Feel like dancing but not clubbing? This place is perfect for you. They run salsa, merengue and bachata lessons several times a week. It’s a great place to have a few drinks and let off steam. The atmosphere and staff are very welcoming, so don’t worry if you have no experience. Check their Facebook page for the latest events and class times. You can find Latin Bar Salsa on the third floor of the Bacchus building.