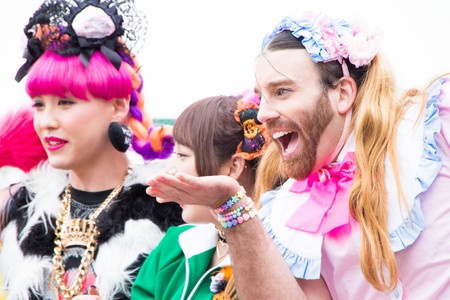 J-Pop. Is there any other genre so controversial, vibrantly diverse, and mysteriously alluring? In the niche world of Japanese pop stars, to gain attention and get ahead you have to be prepared to be a little out there, to try new things and visualise concepts that’ll hit a niche or at least garner a few headlines. From grandma groups to polyamorous pop stars, here are some of the country’s most unique groups.

We’ve written about this very unique group in the past, but any excuse to bring them up again will do. KBG84 are a 33-large member group hailing from Japan’s tropical islands of Okinawa. What makes them so special is that unlike many of the nation’s other J-Pop groups whose average age dares to even touch the 22-year-old mark, every member of KBG84 is at least 80 years of age.

Their name is a cheeky reference to AKB48, Japan’s biggest J-Pop group (literally and metaphorically), but that’s about where the similarities end. Musically, they mix the vibrant and colourful fun-loving energy of J-Pop with their own traditional sound, creating super kawaii hits that have gone viral. Their hometown of Okinawa is home to the longest living residents in Japan; while there’s no exact recipe to their longevity, there are plenty of theories floating around.

In the J-Pop world, it’s common for bands to have ‘rival’ groups, and if there were one rival group for KGB84 it’d have to be these ladies, the Niigata Rice Girls. They gained attention a few years ago for their ode to Niigata’s perfect premium short-grain rice “Rice-Colored Unrequited Love.” This isn’t just a song for the sake of local pride – Niigata rice is in fact to delicious and sought after, and it’s commonly some of the most expensive rice on the market. Also unlike a forgetful lover, Niigata rice will never disappoint.

From the love of rice to the love of multiple wives, next up is Kiyoshi Ryujin 25, a group consisting of singer-songwriter Ryujin Kiyoshi and his ever-expanding collection of brides. The ideology of this group completely flips the concept of idol culture on its head. Typically idols are marketed to be available, partner-less figures, always available to their fans, and those who have strayed from the norm have faced some rather harsh penalties.

Talk about turning lemons into lemonade, this idol girl group was formed from the members’ collective experience of being trapped in suffocating debt. According to their story, the band was founded as a way for the members to tackle their collective 127 million yen (US$1,161,105) debts, their tagline being “people with big debt have big dreams.” The band has come under fire by some for supposedly manipulating fans’ sympathies for success; however, you can’t help but almost admire creative market strategy, something that’s needed to stand out in the brutal world of J-Pop.

Forming at the time when the term ‘Bitcoin‘ was inescapable and it looked like cryptocurrency was about to take over the world, Kasotsuka Shojo were Japan’s premier cryptocurrency-themed pop group. Known in English as the Virtual Currency Girls, this eight-member collective was created as a way to keep the public informed about the cryptocurrency buzz. Each member represents a different currency form, including Bitcoin Cash (BCH), Bitcoin (BTC) (yep they’re two different things), Ethereum (ETH), NEO (NEO), MonaCoin (MONA), Cardano (ADA), NEM (XEM), and finally Ripple (XRP), signified by their individual luchador wrestling masks.

Given the strict marketing, language, and cultural barriers, being a non-Japanese solo J-Pop star seemed like an impossibility, that is until American-born Nicholas Edwards came along. After winning Japanese singing competition “Nodo Jiman Za! World” in 2011, he’s gone on to hit peak levels of J-Pop stardom, even starring in the musical comedy feature film Hinomaru Dream, which was loosely based on his own personal experiences.

Further cementing the argument that foreigners do indeed have a place in the J-Pop world is Deadlift Lolita, a two piece pop-metal (known as kawaii metal) group comprised of Ladybeard aka Richard Magarey – a cross-dressing Australian wrestler and ex-member of Ladybaby – and Reika Saiki, a Japanese professional wrestler and J-pop vocalist. This duo is for those who want their pop tough, real tough.

The supposed selling point of this group in Japan could be seen as potentially a little problematic elsewhere, but hey, J-Pop has never been adverse to a little controversy. Chubbiness is a ten-member group whose point of difference is their, you guessed it, “chubbiness.” Although most people would look at these girls and argue that they’re completely worlds away from being chubby, the world of Japanese image-conscious pop culture is a whole different story.