The 11 Konbini Snacks Every Visitor Should Try in Japan 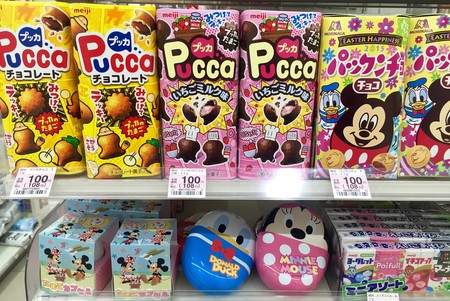 Japanese konbinis are essentially the Disneyland of convenience stores. They stock everything from chocolate to ready meals and business shirts. But what good is a store of this kind if it doesn’t carry a wide selection of snacks? In the snack department, konbinis arguably do it better than anywhere else. The three biggest players in the Japanese konbini game are 7/11, Family Mart and Lawson, and they all have these snacks you should try.

Ever have the craving for potato chips but found them boring to eat? Probably not, but anyway like many other aspects of life in Japan, some crafty folk have found the solution to an everyday life problem you previously didn’t know you had. Jagariko (じゃがりこ）potato sticks are best described as what would happen if potato chips and pocky combined forces. They’re long crisp sticks of potato that come in a broad variety of regular and seasonal flavours including cheese, sour cream and even salad. Beyond just being a crunchy snack, you can actually also make these bad boys into mashed potato, just add hot water, wait a few minutes then mix vigorously.

Haichū’s ハイチュウ, are essentially the candy your parents would have warned you about as a child. The overly sweet (though delicious) stick of individually wrapped candies are pretty much guaranteed to tear out a loose tooth, however it’s probably worth it. Originally created as a an edible kind type of chewing gum, this cheeky snack is now available outside of Japan, but you won’t find a better selection of flavours than at your local Japanese konbini. Featuring classic and rotating choices, they’re sure to keep your dentist in business for a while yet.

When it comes to chocolate snacks it doesn’t get any cuter than Meiji Mushrooms. Known in Japan as ‘Kinoko no Yama’ which means ‘Mushroom of the Mountain’. Though there are a rotating cast of different flavours on offer, go for the classic milk chocolate. Crispy perfectly-toasted biscuit stems are topped with the iconic smooth Meiji chocolate creating a straight up harmony of texture and taste. You didn’t know chocolate snacks could be such an art-form until you’ve demolished a few boxes of these.

Making my own chocolate mushrooms 🍄 ⠀ Is anyone else a fan of Kinoko No Yama? A pack of these never lasts long in my house ✨🍫✨

Crunky are the go-to chocolate snack when Meiji’s mushrooms are feeling a little too fancy. There are a number of ways to enjoy Crunky’s products including bar form, and ice cream, but the recommended route is the Crunky chocolate bites. These little balls are filled with popped grains of rice making them as fun to eat as they are delicious. Like everything else in Japan they come in a variety of styles, but try the green tea and strawberry options – they are a failsafe choice.

These days Pocky is essentially ubiquitous, even outside of Japan. And it’s generally the same everywhere, except for perhaps the flavour options, so when you’re in Japan why not go the other way and try the reverse Pocky, Toppo? While Pocky features a sweet chocolate coated exterior, Toppo’s goodness is on the inside. The Competitor to Pocky, they’re arguably just as delicious, and your hands stay clean, no sticky melted chocolate over here.

Umaibo is one of the konbini’s humble overachievers. These small, puffed, cylindrical corn sticks are a staple in many school lunchboxes, and given that they’re about ¥ 10 each (less than 10c USD) they win on price alone. Texture-wise these guys are similar to Cheetos, but flavour-wise they’re much more diverse. From Shrimp mayonnaise, to pizza, chocolate, classic cheese and even teriyaki chicken, the snack’s name which means “delicious stick” in English, stays very true to its product.

Now it’s time for a classic, and it doesn’t get more traditionally Japanese than mochi. Also sometimes referred to as ‘rice cake’ this old-fashioned Japanese sweet has stood the test of time and reigns supreme on the konbini shelves. Made from glutinous rice that’s pounded into paste and typically molded into small balls, mochi’s greatest strength is versatility. Red bean mochi, cheese mochi, ice cream mochi, cherry blossom mochi, the options are endless.

Ramen lovers rejoice, there’s another way to enjoy this addictive and iconic Japanese dish. Baby Star Ramen is the noodle alternative to potato chips. Having been around for eons, this typically savory and crispy noodle snack recently actually teamed up with Fanta to produce the bizarre but intriguing soft drink flavoured version. Easy to eat, and satisfyingly crunchy they’re the perfect park picnic snack, or a great accompaniment to an after work beer.

For those after something more wholesome than a bag of potato chips, but less filling than a sandwhich, onigir is here to satisfy all your snack food cravings. These fist-sized rice triangles and rice balls are often covered in crispy nori seaweed, though there are seaweed-less options too. They’re stuffed with a variety of fillings from seaweed, to salmon eggs, to chicken to the unlikely delicious combination of ketchup and rice and egg, a snack version of the popular dish ‘omurice’.

Though it’s not very ‘Japanese’ in the typical sense, the konbini’s most popular snack is actually fried chicken, often called ‘kara-age’ in Japanese. Cooked on-site, this ubiquitous snack is located near the cash register in the typical ‘hot food’ section of the konbini. There are a number of options available including honetsuki (pieces with a bone), honenashi (boneless chicken), and what’s most typically referred to as kara-age which is like deep-fried chicken nuggets/chicken pieces. Depending on the konbini, the kara-age pieces come in a variety of different flavours like spicy, curry and classic.

Finally this one is a bit more of a hidden gem, but it’s worth the hunt. Cheese tarts are the cheesecake, crispy egg tart hybrid you didn’t know your life needed. Buttery and flakey, palm-sized pie crusts are filled with savory sweet cheese filling. Because they’re simply so delicious, there are a chain of stores in Japan that just serve these little snack tarts. However, if you don’t have the time to hunt them down, a konbini cheese tart will hit the spot.