The 10 Oldest Restaurants In Japan 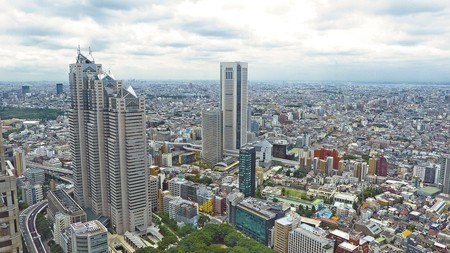 The island country of Japan has a long and colorful history. With an immense population and a diverse culture, the country’s culinary scene offers an array of possibilities. We’ve found the ten oldest restaurants in The Land of the Rising Sun for a bite of history and authentic cuisine. 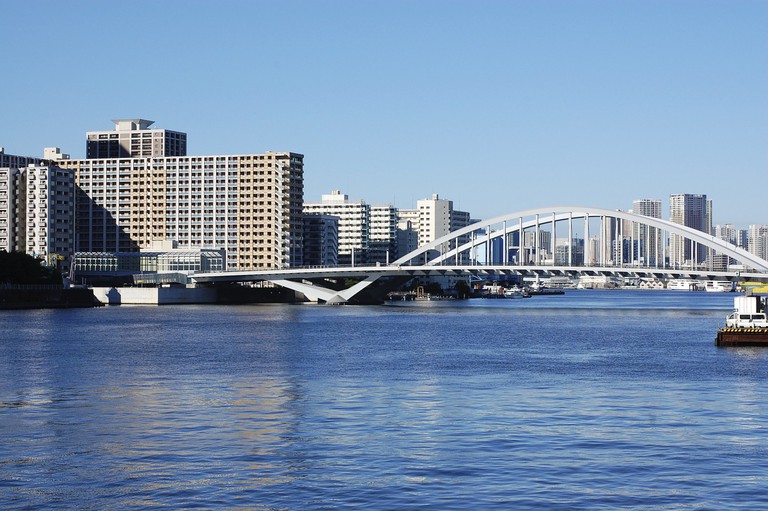 Tokyo is a large, bustling metropolitan area, with no shortage of great restaurants. However, there are still places like Akasaka Asada that proudly and gracefully represent a quieter time in the city. Established in 1659 in Tokyo’s Minato district, Akaska Asada is a ryotei, or a luxurious, elegant traditional restaurant. It also has meeting and event spaces, and can arrange for live entertainment, including geishas that perform traditional dances and musical numbers. Your visit to Akasaka Asada will be marked with polished service and perfectly prepared plates, all in an impressive atmosphere.

Restaurant, Japanese, $$$
Facebook
Email
Twitter
Pinterest
Copy link
Share
Map View
Chojiya is located in Shizuoka, along the Tokaido Highway, one of the five major highways in Japan during the Tokugawa and Edo periods. Chojiya opened in 1596, serving tororo-jiru and tea to passer bys and soldiers. The restaurant was even immortalized in a painting by Hiroshige, one of the greatest ukiyo-e artists in the Edo period. Tororo-jiru is a grated wild yam dish that is often served with rice or noodles, and is still at the center of Chojiya’s menu. Today, you can retrace the steps of the old highway, and try a bowl of the traditional dish for yourself.
Open In Google Maps
10 10, 7-chōme, Mariko, Suruga Ward Shizuoka, Shizuoka, 421-0103, Japan
+81542581066
Visit Website
Give us feedback 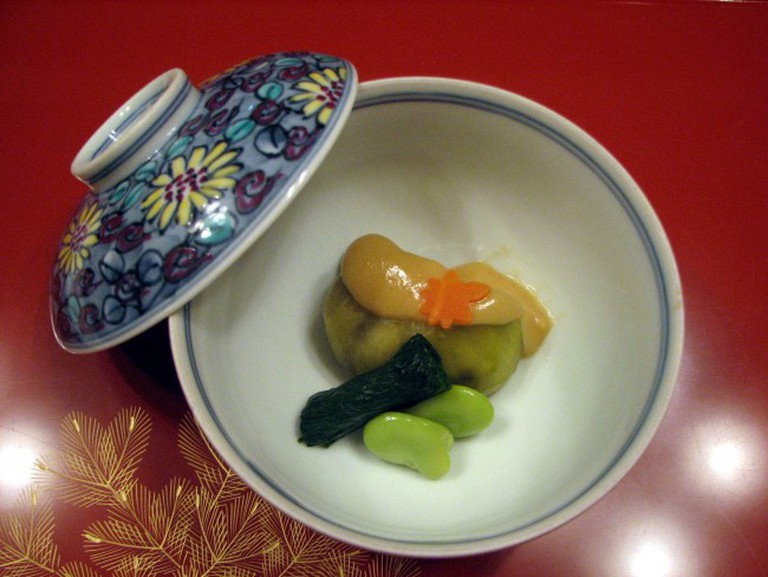 A Kaiseki dish, typical of what is served at Harise in Kyoto | © Chris73/WikiCommons
Kyoto actually has a surprising number of centuries-old restaurants and is well worth a visit. Harise has been in business for over 350 years, and offers traditional Japanese cuisine in an elegant setting. Dining areas are small and private, making it the perfect place for an intimate, refined dining experience. Harise serves a Kaiseki-style lunch or dinner, sometimes as many as a dozen courses. Each course is served on individual plates for each diner, and is plated with gastronomic and aesthetic precision.
Open In Google Maps
Daikokuchō, Higashiyama Ward Kyoto, Kyoto, 605-0911, Japan
+81755611017
Visit Website
Give us feedback

If you are visiting Kyoto and find yourself a little road-weary, make a reservation at Heihachi Jaya, just as travelers have been doing since 1576. Situated on the bank of the Takano River, the tea house inn has been a resting place for fish peddlers, merchants, and even passing samurai. Enter the restaurant through an old Buddhist Zen temple gate, and cross through serene gardens before finding your way to a private dining room. Heihachi Jaya is also an inn, with a traditional clay sauna. Relax in the sauna and dine on grilled freshwater fish and barley rice while you take in the beauty of your surroundings.

Coming in as the oldest restaurant on our list, Honke Owariya opened when the Renaissance was at its height in Italy, and Charles I was on the throne in England. Just a short distance from castles, shrines, and imperial palaces, Owariya quietly makes humble dishes with soba (buckwheat noodles). It hasn’t always specialized in soba dishes, though. When it opened in 1465, it primarily made and sold confections and sweets. It has only been in the last three or four hundred years that the restaurant switched its focus to noodles. Soba can be served a variety of ways, both hot and cold, but is most commonly made in a warm, mellow-flavored soup. There is a reason that this place has been around for so long, its bowl of warm soba is life-changing.

Restaurant, Fusion, Japanese, Chinese, $$$
Facebook
Email
Twitter
Pinterest
Copy link
Share
Map View
Kagetsu is the oldest, and perhaps the most well-known, restaurant in Nagasaki. It was originally founded in 1642 as a luxurious geisha house. Today, the restaurant has all of its former beauty, but serves a cuisine that mixes traditional Japanese with Chinese and Portuguese influences. Known as Shippoku, this fusion cuisine can be traced back to the middle of the sixteenth century when Portuguese sailors and Christian missionaries first landed in Japan. Visitors today can enjoy an elegant meal in the kaiseki style (several courses served with special attention to plating and presentation), in an atmosphere surrounded by lush gardens and stunning traditional architecture.
Open In Google Maps
1 2, Maruyamamachi, 丸山町 Nagasaki, Nagasaki, 850-0902, Japan
+81958220191
Visit Website
Give us feedback 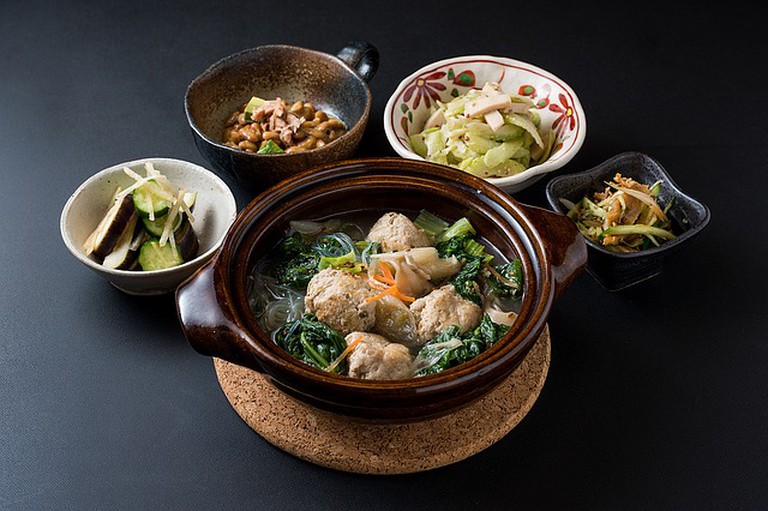 The Japanese ryotei is a restaurant concept that traditionally catered to businessmen and politicians, with an extreme attention to detail and luxurious experience. Kawabun opened 400 years ago and has been serving exquisite meals ever since. The days of needing a referral to get a table at Kawabun are gone, but there is still a feeling of exclusiveness. The menu is seasonally driven, and gives the chef a lot of freedom to carefully craft each individual dish. The restaurant will make menu accommodations for each guest, or you can simply choose the chef’s choice, sit back, and enjoy each masterfully created surprise.

Vegetarians rejoice, because this place is for you. Since 1635, Okutan Higashiyama has been making tofu in house and fresh every day, just inside the gates of the Kiyomizu-dera. They then take that tofu and make tantalizing dishes that even the most carnivorous of guests will enjoy. Try a soup of boiled tofu buds and wild yam, with sesame tempura and crisp pickled vegetables. Many of the tables offer a view into the stunning gardens, making for a breathtaking visual backdrop. For a truly unique experience, Okutan Higashiyama also offers tofu-making studio classes, so you can take home the skills to make some of their delicious dishes on your own. 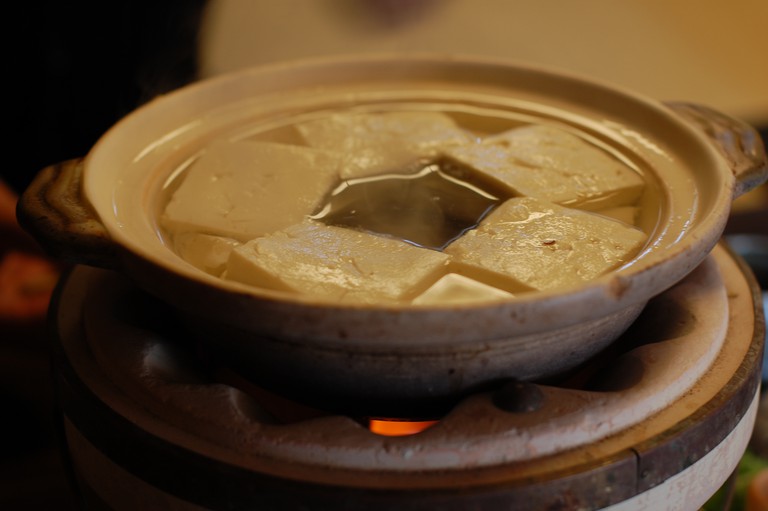 You are reading this right, we have not made a mistake. There are two centuries-old okutan restaurants in Kyoto. Okutan Nanzenji is located just inside the gates of one of the sub-temples in Nanzenji. The surrounding architecture and gardens are a stunning reminder of the temple’s history and the many people that have traveled there on holy pilgrimage over the centuries. Just like those weary travelers of old, you can warm your soul over the restaurant’s house speciality, yudofu. Yudofu is an old Zen recipe for fresh tofu that is simmered in a large ceramic pot over charcoal, with soy sauce for dipping and an array of vegetable dishes on the side. 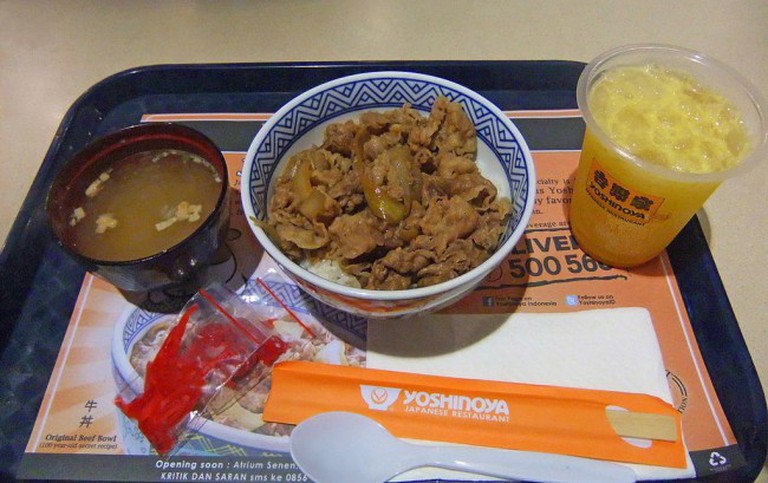 A quick meal at Yoshinoya | © Midori/WikiCommons

To be fair, this restaurant isn’t nearly as old as the others on our list, but it has the unique distinction of being the oldest chain restaurant in the world. Yoshinoya’s first location opened in Tokyo in 1899, and has steadily grown over the last century. From the very beginning, Yoshinoya’s speciality dish has been gyudon, a bowl of rice that is topped with tender beef that has been slowly simmered with onions and spices, for a mildly sweet flavor. Yamada serves authentic Japanese food, but a simpler and quicker version of it. The chain now has over 1,400 locations in 9 different countries, making tasty, quick Japanese food available to the masses.