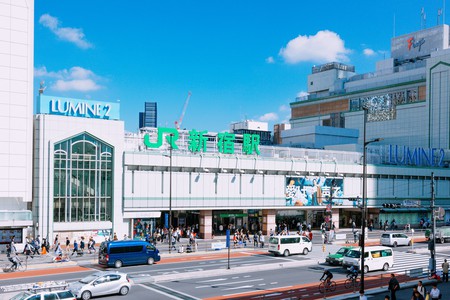 Sushi, anime, cat-related paraphernalia: there are some things Japan does better than anywhere else in the world. However, many would argue that what they do best of all is trains, boasting the most well-connected, efficient, and futuristic system in the world. Here are a handful of almost unbelievable – but completely true – facts about Japan’s rail system.

A never-ending labyrinth of underground tunnels, shopping strips and seas of moving bodies, Shinjuku Station is a place where seasoned locals get lost on the regular. Once you’ve visited, and gotten lost a handful of times, it probably won’t surprise you to learn that this is the busiest train station in the world. Servicing around 3.6 million passengers daily, the station is so hectic that in 2016 the East Japan Railway company unveiled a new app specifically designed to get around this single station.

Once you’ve seen the madness of Shinjuku, you’ve seen the train network at its most hectic. However, there are plenty of other super busy stations located across the country. Out of the 51 most trafficked stations in the world, Japan is home to 45 of them, proving once again that this is a nation that runs on trains. The top five stations in descending order are Shinjuku, Shibuya, Ikebukuro, Umeda (in Osaka), and Yokohama.

There’s a train station that opens just twice a year

From the busiest stations to the least, Tsushimanomiya Station, on the island of Shikoku, is a small station that opens for business just two days a year. In celebration of the local summer festival at the Tsushima Shrine, it opens on the 4 and 5 of August.

Japan has the longest running upside down train

About an hour outside of Tokyo, you’ll find Chiba, a beachy prefecture that’s often overlooked by visitors, but is filled with fascinating attractions. It’s also home to the Chiba Urban Monorail System that’s both weirdly retro and futuristic at the same time. The train here hangs from the rails and runs along a 15.2 kilometer (9.4 mile) track, making it the longest suspended rail system in the world. It’s almost impossible to walk under this train without feeling like it’s going to drop on top of you.

Many cities offer female only carriages on the metro

When you have trains and stations as packed as Japan’s, there’s always going to be an opportunistic few who take advantage of the close quarters to fulfill their undesirable goals. We’re talking about “chikan” or, in English, perverts. As a way to prevent gropers on the packed trains, the metro system implemented women’s only carriages during peak hours (mornings and evenings during workdays).

Otaku is the Japanese word for geeky nerd fandom, and although you might think otaku refers only to anime, Akihabara, and electronics, in reality you can be pretty much an otaku about anything. Enter “densha otaku” or “train nerd.” What’s unique about train nerds is their specialization. According to Sora News, there are currently 36 different types of densha otaku, from “ori-tetsu,” someone who likes to walk around the station, to “ekiben-tetsu,” someone who really loves the lunchboxes sold on the train.

last meal in the country in the shinkansen. how does even a cold bento taste so good here? 😝🍱

It’s no secret that Japan is one of the most earthquake prone nations in the world. But did you know that, thanks to ingenious design and Japan’s meticulous eye for detail, it’s also one of the most earthquake safe places? Houses are built on special movable bases, while the rail network has been fitted with a special safety mechanism. As shinkansens shoot across the country at eye watering speeds, the main system that connects them all can freeze every single one of them in their tracks at the first sign of an earthquake.

Known as the Seto Ohashi Bridge, this structure is a string of connected bridges that connect Okayama Prefecture on Honshu to Kagawa Prefecture on Shikoku Island. Stretching 9,368 meters (5.8 miles) long, the bridge is mainly used for cars, but also has space for a shinkansen track.

The recent news of a new Hello Kitty shinkansen made waves across Japan, but let’s not forget that Tokyo has been home to a Hello Kitty train station for a while now. Located in Tama-Center Station, toward the southeast section of Tokyo, you’ll find a fully decked out Hello Kitty train wonderland, complete with Hello Kitty warning decals on the platforms and a very impressive stained-glass ceiling display right in the heart of the station.

The way to Puroland… All are KITTY 🍒😍

A train went viral for being a few seconds early

Japan has a reputation for being an efficient nation, and the train system is one of the ways in which this reputation was made. Late last year, one particular train story went viral because one specific train departed 20 seconds early. The guilty party was the Tsukuba Express, which travels between Tokyo and the city of Tsukuba. It left the platform at 9:44:20 instead of 9:44:40 as scheduled. To remedy this blasphemous situation, the company released a statement apologizing for the issue, citing that the driver failed to read the schedule properly and promised it wouldn’t happen again. As expected, social media users had a field day.