The 10 Best Things to See and Do in Ehime 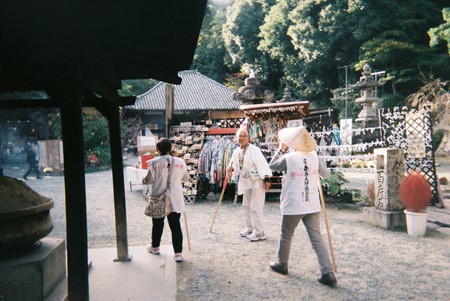 Walking through a village in Ehime | © Lucy Dayman

Located on the more southern end of Japan, Ehime Prefecture sits along the northern coast of the island of Shikoku. It is an underrated pocket of Japan, and it is ready to be explored.

Home to one of the nation’s original castles, a spiritual pilgrimage journey, and plenty of mikan oranges, Ehime is the place you’ve been looking to uncover a side of Japan a little less tourist trodden. Here are just a handful of unforgettable Ehime experiences you may want to try.

One of the most popular and historic onsens in all of Japan, Dogo Onsen is arguably one of Matsuyama city’s main tourist draw cards. Said to be the inspiration behind Studio Ghibli’s iconic anime film “Spirited Away,” this ancient bathhouse has a history that goes back 3,000 years. With labyrinth-like stairways leading up to bathing rooms, relaxation spaces, and other hidden nooks and crannies, its mystique is something quite inspiring. You’ll see first-hand the clear influence it left on the film’s creators. Dogo Onsen is open to the public most days of the week.

Picnic on the grounds of Matsuyama Castle

Sitting atop a hill that towers over the city of Matsuyama, the Matsuyama Castle, one of Japan’s 12 original castles, is easy to see. Although it was originally constructed during the early 1600s, the current version of the castle was recreated in 1820, after the original structure was hit by lightning. The inside of the building is worth exploring, as it is home to a museum and a number of rooms; however, one of the best ways to truly appreciate the castle’s magnificence is from the outside. The spacious grounds offer plenty of space for relaxing and picnicking. In the spring, when the gardens explode with soft, pink, cherry blossoms, it’s really something else.

Then admire the city skyline from the top

Once you’re done wandering through the castle, head inside to the main building to scale the narrow wooden staircase that leads to the Tenshu, the highest lookout point on the grounds. From this vantage point, you’ll be able to see the incredible castle grounds unfold beneath you. Looking out further, you’ll be privy to skyline views of the entire Matsuyama city.

One of Japan’s most famous pilgrimage walks, and also one of the main reasons behind Shikoku’s tourism, the 88 Temple Pilgrimage is a walk that loops around the island of Shikoku connecting the area’s most spiritual and historic sites. The journey is around 1,200 kilometers (746 miles) long, but that doesn’t deter hundreds of thousands of people from making the trek across the island. You’ll be able to pick out the pilgrims by their white clothing and broad, cone-shaped hats called “sugegasas.” If you’re feeling friendly, be sure to stop and have a chat; they’ll definitely have rich stories to share.

Stroll the streets of Historic Uchiko

Sitting about 40 kms (25 miles) from Matsuyama city is Uchiko, a historic town that was built on and sustained by wax and paper production. As a city frozen in time, the buildings here haven’t changed for over a century, when the city was at its most prosperous. Filled with attractions highlighting the city’s history, Uchiko is also home to Uchiko-za, an impressively maintained, full-scale, kabuki theater, which is open most days and still hosts an occasional show.

At Uchiko yesterday afternoon. It's a small town about 30mins (by limited express) from Matsuyama in Ehime Prefecture. Now a quiet town with extremely few people on the streets (we saw probably less than 50 people…😅), Uchiko was actually once a prosperous center of wax and paper production. In the old days, I guess wax was very important and that's what made the people here rich. I came here specifically to see Yokaichi Old Town (八日市) which is Uchiko's preserved street of houses. I got lost and for a while I was really worried that I made a mistake coming here because I couldn't find the old house. But after a while I did find the street and it was really pretty! Especially since there were so few people around! This historical district supposedly looks just as it did over 100 years ago, when wealth and prosperity came to Uchiko through its wax trade. Uchiko can easily be explored within 2 -3 hours just by walking. They also have bicycles for rent at the train station but I totally forgot and we ended up walking around. But there are no steep slopes so it's really easy to explore on foot. #uchiko #japan #ehime #shikoku #merchanthouse #japanesehouse #内子 #愛媛 #四国 #四国旅行 #oldhouses

Take a trip back in time by visiting Garyu Sanso House

For a deep journey into Ehime’s history, visit Garyu Sanso Villa, a place where time hasn’t moved since 1907. Towering over the east river that borders Ehime’s secret old town, Ozu, this villa took a decade to construct. Inspired by Kyoto’s famous imperial villas, Katsura Rikyu and Shugakuin Rikyu, the site is the physical embodiment of Japanese architecture, meticulously perfected to the point of awe. The villa is open to the public most days of the week.

Eat a whole lot of mikan

If there’s one thing the prefecture of Ehime is proud of, it’s the production of delicious, sweet, juicy mikan. A kind of Japanese orange-mandarin hybrid, this citrus fruit is so ubiquitous, it’s even the inspiration behind Ehime’s mascot, “Mica” – an adorable half dog, half mikan. You can’t visit the area without trying some of the much loved local produce in both its original form and in the many snack variations. Be warned, mikan flavored coffee, is probably best left on the shelf.

Ehime’s citizens loves mikan so much that local café Ehime Kitchen ef, serves the juice on tap. Yes, they have a literal tap that’s running with juice all day long. The café also serves imabari yakibuta tamago gohan, a deliciously simple dish of rice, egg, pork, and sauce; this dish was once the go-to meal for the area’s local workmen.

For a different way to see the area, consider grabbing a ticket to ride the Iyonada Monogatari, a luxury sightseeing train that travels between Matsuyama and Yawatahama. It travels along the Seto Inland Sea and passes through clusters of scenic small towns along the way. What’s so special about this journey is that the locals come out to greet the train as it passes by their backyards. You might see people dressed in costumes, pets dressed in costumes, and children excitedly sprinting alongside the train. It’s a truly unforgettable experience.

If there’s one thing Ehime loves as much as mikan, it’s Tobe pottery. A historic craft passed down through generations, this incredibly durable ceramic ware gained a reputation for being some of the most robust in the nation, and is arguably some of the most beautiful. In order to balance its tough, rough, and ready reputation, Tobe pottery makers decorate their creations with incredibly stunning, delicate artworks, not limited to any style or era. Head to the city of Tobe and visit its famous ceramic shop. Try your hand at painting your own piece of Tobe-yaki (or Tobe ware).