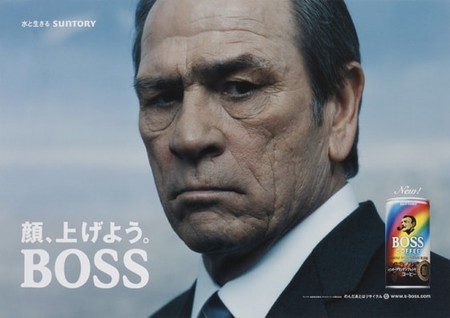 Of the many Western institutions that Japan has a particular fondness for, Hollywood celebrities are pretty high on the list, and Tinsel Town’s finest are frequently found in Japanese commercials flogging everything from beer to cell phone providers. Appearing in these ads in Japan doesn’t come with the stigma often attached with such endorsements in the West. In fact, it’s often seen as a sign that the actor excels at their craft. The commercials tend to be cheerful, absurd and wildly entertaining, so here are 10 of the best, funniest and weirdest efforts.

The Academy Award-winning wrinkle-faced curmudgeon is something of an advertising institution in Japan. Jones has appeared in campaigns for more than one brand, and his face can be seen on countless Boss Coffee vending machines, the lifeblood of many a hard-working salaryman. Here he is, deploying his trademark scowl and irascible demeanour in an attempt to keep students in line at a Japanese high school.

Not long after he hit pay-dirt with his role in Terminator 2, the star leant his talents to this odd little effort plugging the Japanese equivalent of Pot Noodle. In the ad, he quite effectively portrays an iron teapot. Hot stuff, to say the least.

In the mid-90s, Ford embarked on a well received campaign for this hugely popular brew, and filmed a number of adverts that showcased its yeasty charms. Of these, the stand-out is this clip, in which he drinks an imaginary beer in a sauna with his Eastern associate and puts his acting abilities to superb use.

The former governor of California was another mainstay of Japanese advertising and appeared in ads for a slew of products in the 80s and 90s. One of his most memorable was a spot in which he transitions from a mild-mannered salaryman to, well, something else entirely.

Sankyo is one of the largest manufacturers of pachinko (Japanese pinball) machines in Japan. They’re also responsible for this advert, which is possibly the best on this list, if for no other reason than legendary thespian Nicolas Cage appears to be improvising the entire thing. Masterful. It’s also notable for the complete absence of pachinko machines.

After some time spent out of the game, Schwarzenegger’s return to Japanese advertising was hailed by some as the return of a prodigal son. Here, he extols the virtues of a lesser-known brand of canned coffee (not as popular as Boss, but a worthy contender all the same). His Expendables (2010) co-star Bruce Willis also gets in on the shouty-construction-workers-fuelled-by-caffeine action.

A ubiquitous provider of cell-phone networks (its Shiba Inu mascot, Otosan, is seen absolutely everywhere in Japan), SoftBank roped in none other than Canadian man-boy sensation Justin Bieber for an ad in which he charms his way through a high school with wholesome aplomb. Japanese comedy legend Pikotaro, who shot to global fame off the back of his viral hit PPAP (Pen Pineapple Apple Pen), also makes a notable cameo.

Black Black is a popular brand of caffeinated chewing gum that has been available in Japan since the early 1980s. The Muscles from Brussels was the company’s poster boy of choice in this ad, where he appears to badly need some pep. Nothing seems to enliven him until he tries a stick of the confection, which returns him to his invigorated glory.

Jackman’s distinguished background in musical theatre comes in handy for this extended offering, complete with a spectacular song-and-dance number in which Australia’s favourite son positively dazzles. Too bad he didn’t get to show off this fancy footwork in Logan (2017).

It’s not all red carpets and undying adulation – acting can be a proper slog sometimes, and auditions are a notorious grind. Why not use this popular Japanese shampoo to improve your chances and help sway the casting in your favour? That’s what Natalie Portman did (on top of showing off some impressive fencing skills), and she got the gig. Congratulations, dear Natalie! Or, as the Japanese might say, “Omedetōgozaimasu, Nat-chan!”