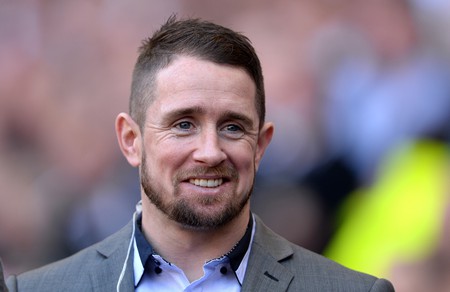 When Japan hosts the 2019 Rugby World Cup, it will become the first nation outside of the sport’s traditional heartlands to host the tournament. We spoke to Welsh rugby legend Shane Williams, who finished his career in Japan, about why the tournament is perfectly timed for a country where the sport is blossoming.

When sport’s showpiece events are taken to fresh pastures there can be an element of apprehension. Will tickets sell? To what lengths will the host nation go? Will the wider community care? But as Japan gears up to host the 2019 World Cup, the general mood in the rugby community is one of pure excitement.

Shane Williams is well acquainted with Japanese life, having spent three years at Mitsubishi Dynaboars – a second-tier club based about 50km west of Tokyo – at the end of his playing career. But setting up home in Japan was never part of the plan for Wales’ record try scorer. Back in 2012, Williams was ready to retire – he’d scored a try in what was meant to be his final professional appearance, and life at home was settled and happy. 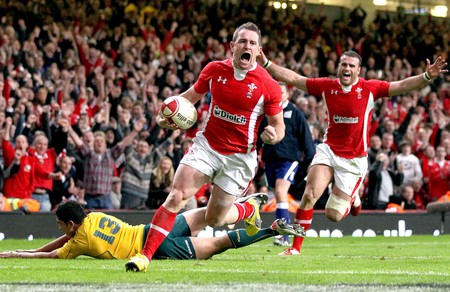 ‘It came completely out of the blue,’ he says. ‘My boy had just started Welsh language school and my daughter, who had struggled at school initially, was doing well. My wife and I had just started a business and we were happy living in the town we and our families had lived in all our lives.’

Despite this, Williams left the tiny mining village of Glanamman and headed for Kanagawa Prefecture. ‘I was petrified,’ Williams admits. ‘I was worried about the language; about how busy it would be, coming from a small town; simple things like getting around, reading signs when getting a train, all that stuff – but I also thought it was a once-in-a-lifetime opportunity.’

Hungry to experience the country and its culture as much as possible, Williams began a process of total immersion. He had toured Japan in the past, with Wales, but that involved ‘eating at McDonald’s most of the time’. Big Macs and fries were replaced with yakiniku and sushi, and even today Williams maintains he’d ‘much prefer to travel around Tokyo than London’. Whether he was swimming in the sea in Okinawa, walking up Mount Fuji or snowboarding in Hokkaido, Williams fell in love with a completely new life, all while still getting to play rugby.

‘I know the game inside out, but I had to learn how to manage people and get my points across, all in Japanese,’ he remembers. ‘I messed up so many times, and they all took the mickey, of course, but they helped me so much along the way.

‘It’s not a place to steadily retire. I was worried the drop in quality would be massive. I had more space and time, but the tempo was relentless and their fitness levels were incredible – that was a shock to the system.’

That playing style has become synonymous with Japanese rugby. Trying to compete with the huge packs of France or South Africa simply isn’t going to bear any fruit, so the Japanese – from the grassroots up – keep the ball and move it quickly. The style has proved successful, and ultimately played a part in growing the sport throughout the country. 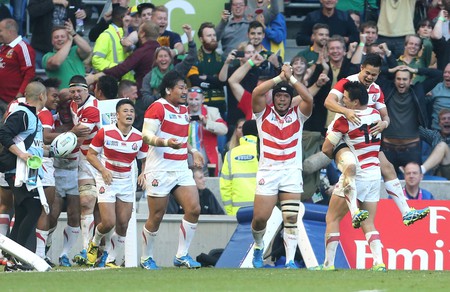 ‘They play to their strengths, and they play cleverly,’ Williams says. ‘When they beat South Africa [at the 2015 World Cup], viewing figures in Japan quadrupled for the next game and attention shifted massively. They beat Italy recently and teams view them as a threat. They’re proud – rugby may not be huge in Japan, but the nation will get behind them in a big way.’

That South Africa win – masterminded by England’s current boss, Eddie Jones – was the biggest in Japan’s history and couldn’t have come at a better time. Casual fans’ sudden surge in interest was heightened further by the realisation that Japan would play host next time around.

It was the same year that a Japanese rugby franchise, the Sunwolves, entered Super Rugby, the southern hemisphere’s top club competition. This put some of the best players in the world – David Pocock, Kurtley Beale, Michael Hooper – in front of Japanese audiences. Having such powerhouses regularly playing in Japan is integral to growing the game in Asia, and with Tokyo hosting the Olympics in 2020, excitement is building.

‘When I started playing there were a few hundred fans in the stands – that grew to a few thousand,’ Williams says. ‘Rugby must be the fifth, sixth, maybe seventh most watched sport in Japan. Certainly within the three years I was there, the levels rose significantly. The high-school matches were getting 30,000 supporters, as were the college [ones], and that definitely wasn’t the case before 2015.’

Before the last World Cup, Japan had won just a single game on the sport’s biggest stage, a 52-8 victory over Zimbabwe in 1991. In the 2015 tournament, they won three. Next year they are in a pool with Ireland, Scotland and Russia. Getting out of the pool will be an unprecedented success.

The 2019 World Cup sees the hosts play in the opening game, while the Russians will be providing the opposition and attempting to dampen local excitement. ‘What I like about the Japanese people is they’ll support anything,’ says Williams. ‘They’ll make a day of it, turn it into a festival environment. It’s why I’m excited about this World Cup, because they’ll not only support Japan, they’ll back all the teams and watch all the games, and they want this to be the best. They genuinely could make the best World Cup that there’s been.’