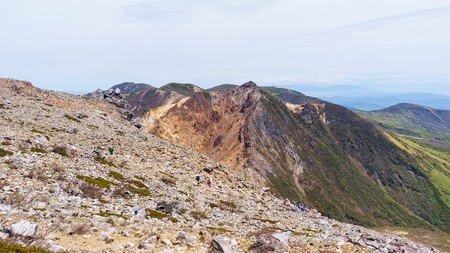 Home to a large number of glorious peaks – among which the mighty Mount Fuji stands tall – Japan offers hikers a seemingly endless supply of mountain trails. Inviting for nature lovers and trekkers of all levels, you can follow them and unveil a world of volcanic craters, waterfalls and wildflowers. Read on and discover some of the most scenic hiking routes to explore in Japan.

From the Southern Japanese Alps’ fir forests and rare fauna to a glacial cirque surrounded by the Hotaka peaks, the following trails guarantee a rewarding hike – sometimes rigorous and others more relaxed – across the diverse Japanese terrain. Browse through our suggestions to pick your favourite route and start planning your dream hiking adventure.

Named after the Buddhist fire goddess Fuchi, the legendary Mount Fuji is a dormant volcano which stands at 3776m (12,388ft), offering magical views from its slopes to those daring to climb it – the best time being July or August, when most of the snow has melted. The hike can take five to ten hours depending on the trail you choose to follow. There are four main trails leading up to the summit – the Yoshida, Fujinomiya, Subashiri and Gotenba trails – as well as ten stations for each of the trails along the way; the first one sits at the bottom of the mountain and the tenth one at its top. Paved roads will take you to each of the “fifth stations” by foot or by car, from which the upward hike begins. Some people end their hike at the fifth station without going further up. From there, you can see the five lakes of Fuji on a clear day; Lake Kawaguchiko, Lake Yamanakako, Lake Saiko, Lake Motosuko and Lake Shojiko.

If you choose to climb to the top, you can start the ascent at the Kawaguchi-ko fifth station; you will be reaching the summit in five to six hours (without counting any breaks at the available mountain huts). If you’re not in a rush, though, it might be worth spreading the trek out over two days, to climb at a calmer and steadier pace and truly make the most of the scenery. There’s a certain trail, known as the “pilgrimage trail”, which will take you to the top through sacred forests that are home to Shinto shrines and Buddhist temples. Once you’re up, you’ll see a shrine to the Shinto goddess Sengen-Sama. 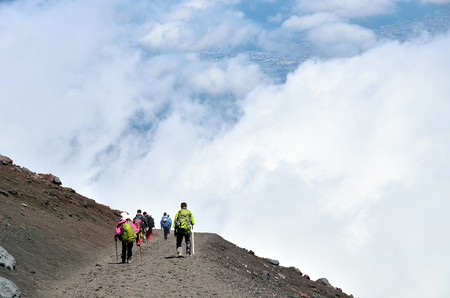 The descent from Fuji is twice as fast yet just as difficult, given the trail leading down is made of loose rock and pebbles, which carries the extra risk of slipping and falling. So be careful at all times.

Part of the southern range of the Minami Alps that extend across the Yamanashi, Nagano and Shizuoka prefectures, Mount Kitadake (or Kita) is the second highest peak in Japan, after Mount Fuji. It is said that Kita is actually where the history of modern mountain climbing began in Japan, when British missionary Walter Weston decided to ascend it back in 1898. Kitadake and its adjacent Mount Ainodake – the fourth highest peak in Japan – offer trekkers an incredible hike paired with beautiful panoramic views and abundant nature. The Southern Alps boast dense beech, hemlock and fir forests, bright-coloured wildflowers and rare animal species.

Start your hike at the Hirogawara trailhead– only accessible by bus or taxi – in the Minami Alps city, which is about a four-hour drive from Tokyo. Follow the forest path that runs alongside a river, which will take you to a boulder trail leading straight to the ridgeline. The ascent takes around six to eight hours so it might be best to spend the night in a tent or in one of the mountain huts when you’re close to Kita’s summit. Your best bet is the Katanokoya Hut, which sits just under the summit of Kitadake, on a shoulder between the latter and Mt. Ainodake. In the morning, you can easily reach the summit of Ainodake and take in the splendid sunrise view of Mount Fuji, before following the same trail back, past the hut and up to the top of Kitadake. Follow the Happon Col route to return to Hirogawara. 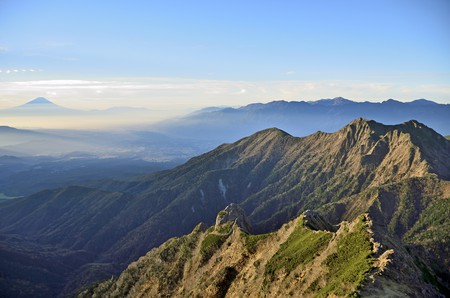 If you crave for a more mystical hiking experience, then the trek in Nikko National Park – a three-hour train or bus ride from Tokyo – is exactly what you’re looking for. The park stretches across the Tochigi and Gunma prefectures and is marked by lush forests, vast lakes and multi-coloured shrines.

Your first stop should be Mount Nantai, a conical volcano rising 2484m (8,150ft) over Lake Chuzenji. It is the object of worship of Nikko Futarasan-jinja Shrine, with sub-shrine Chugushi found at the base of Nantai and Okumiya at its peak. Follow the 2.5mi (4km) rocky trail to climb about 1219m (4,000ft) to the summit and step through reddish-brown volcanic strata for the last part of the hike. The entire trek takes around three to four hours to complete but it is steep and rugged, so it’s more appropriate for fit trekkers.

At 2578m (8,458ft), the neighbouring Mount Nikko-Shirane offers sublime views of the Kanto plain and the surrounding mountains, including Mount Nasudake, an active volcano that belches out gas. Take in the marvellous views of Lake Suganuma and Lake Marunuma at the base of Nikko-Shirane before venturing a climb. Both Nikko-Shirane and Nasudake come with cable cars which will take you halfway up. To get all the way to the top of Nikko-Shirane, take the ropeway which is the easiest of the three available routes. At its end, you will find a shrine, a hot spring foot bath and a restaurant. The hike to Mt. Nikko-Shirane lasts approximately five hours. 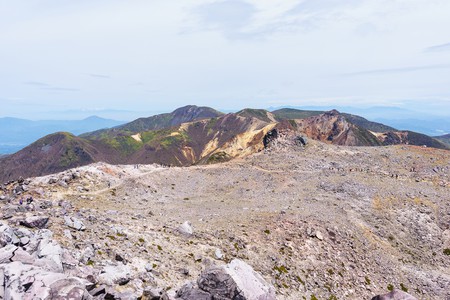 There are hot springs near the trailheads of all three mountains, so you can revel in a long soak at the end of your hike.

With 100 active volcanoes – accounting for 10% of all active volcanoes worldwide – it’s no wonder Japan is where you can find an actual complex volcano, which is very much active too. Mount Asama, in the Northern Japanese Alps, straddles the Nagano and Gunma prefectures and reaches 2,568m (8,425ft), with its fuming top standing out from afar. Asama, which last erupted in 2019, is accessible from resort towns such as Karuizawa and Tsumagoi, while the town of Komoro – a two-hour drive from Tokyo – is a good starting point to hike your way up. To reach the trailhead at the Takamine Kogen hot spring, hop on a train to Komoro Station, then take the bus to the spring.

Onioshidashi Park that hosts the mountain was formed back in 1783 when a massive eruption caused the lava to create a mass of jagged volcanic formations with patches of foliage. There are now a number of trails you can follow to explore it, and they all guarantee spectacular views of the mountain. If you choose the trailhead at Takamine Kogen Onsen as your starting point, it will take you about 3.5 hours to reach the summit. You will be passing through a dense forest before moving into Asama’s volcanic terrain, from where you can enjoy sweeping views of the Northern Japanese Alps. Near the top, there’s a rope signifying that you’re getting too close to the smoking crater. 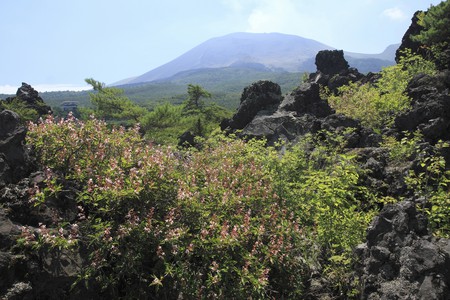 Dubbed the Japanese Matterhorn, Mount Yarigatake – or Mt. Yari, meaning “spear” – is the fifth tallest peak in Japan, its spear soaring 3,180m (10,433ft) above the ground. Yarigatake lies in the Kita range of the Japanese Alps in the Nagano prefecture and can be reached from the Kamikochi region, a five-hour drive from Tokyo. Apart from Yari, the area also makes for a good starting point to climb Mount Hotaka and Mount Yake.

To hike Mt. Yari, start from the forest road and slowly climb your way up through the valley alongside a river. About eight kilometres (5mi) in, you will reach Yaridaira Goya, a hut with plenty of room to camp. This is where four trails that lead to Yari intersect. As you’re moving north up the valley, the terrain becomes gradually steeper, until another trail junction turns up. From there, you can keep walking on the previous trail or pick an alternative route along a scenic ridgeline. Just before you reach the peak, you will come across a large lodge where you can stay or simply camp outside. The rest of the hike to the summit features chains and ladders that are usually crowded with hikers. 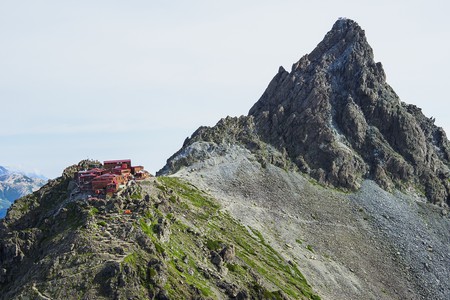 Another idyllic spot not to be missed is the Karasawa Cirque, a glacial cirque – a valley formed by glacial erosion – which is surrounded by the Hotaka peaks, in the southern part of the Northern Japanese Alps. The cirque is framed by the towering Mt. Maehotaka, Mt. Okuhotaka, Mt. Karasawa, Mt. Kitahotaka and Byobu-iwa Rock, and serves as the perfect place to admire the terracotta-hued foliage in autumn. There are also two huts here, Karasawa Hutte and Karasawa-goya, where you can stay or camp al fresco. 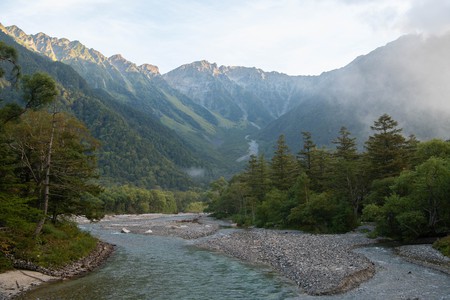 Hiking your way up the Hotaka peaks is not as challenging as climbing other Japanese mountains – although some climbing experience is required – and beginners will find it especially easy to at least get to Karasawa.