Queer Nightlife: The Best LGBTQ Bars and Clubs in Kyoto 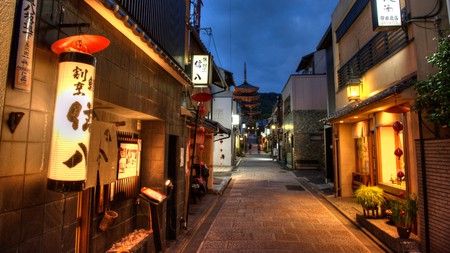 Ancient temples, tranquil gardens and traditional tea houses abound in Kyoto, but there’s also a flourishing nightlife scene. And while the LGBTQ nightlife of Tokyo and Osaka tends to overshadow Kyoto’s, there are still plenty of mixed and gay-friendly venues in the city.

While Kyoto’s LGBTQ scene isn’t massive, choices are particularly limited for lesbians in the city. “The imminent closure of Colori Cafe was a major blow to Kyoto’s lesbian community, but for women seeking to meet other women, it doesn’t mean the party has to end,” says bartender Grace Yuri. Lisa N’Paisan asked Yuri for her inside scoop on where the LGBTQ community mingle in Kyoto. From a gay-owned coffee shop-bar to a monthly drag night, here are her favourite places to go out.

It’s easy to miss this men-only bar, which is tucked away on the third floor of an office building. A step inside uncovers the sleek interior; the perfect backdrop to enjoy the bar’s tantalising cocktail menu, which has been curated by friendly bar master Yuji, who has owned the bar for over 35 years. Whether you’re travelling alone in Kyoto or with a few friends, Yuji is notorious for pulling out a map and circling all the must-see places in his home city. Belt out your inner Lady Gaga or Celine Dion during one of their karaoke sessions, which are available to anyone and everyone. Like many bars on this list, there is a cover charge, which entitles you to a free drink and snacks.

“As the only lesbian bar left in town, Bar Look Me brings the best crowd of lesbian and bi women you’ve seen in Kyoto.” says Yuri. Drawing a flirty younger crowd, Saturday night is reserved for women only. And with an affordable ¥500 (£3.70) entry fee and cocktails, beers and whiskeys that will set you back at just ¥700 (£5.20), you won’t want to head home when 2am rolls around. Expect the crowd to get rowdier as time draws on, with plenty of karaoke towards the end of the night.

The gay scene in Kyoto may be more low-key than its neighbouring city of Osaka, but that doesn’t mean the parties here don’t pull their weight. On the last Friday of every month, Kyoto’s Club Metro hosts the spectacular drag night Diamonds Are Forever. “Club Metro isn’t exactly a gay nightclub, their monthly drag night is considered the unofficial gay party of Kyoto by locals,” Yuri says. Shake your booty on the dance floor to ’70s disco, soul and ’80s new wave. An entrance fee of ¥2,000 (£14.85) includes one free drink ticket and if you’re a student or a foreigner, two free drink tickets are given. Deeming itself a “night culture school”, Club Metro also hosts a plethora of lectures, workshops, parties, poetry readings and film screenings.

This gay-owned lounge bar is closer to a coffee shop than a bar, with a limited alcoholic drinks menu of Japanese Asahi Super Dry beer and Gossips Merlot imported from Australia. Located in a 110-year-old renovated traditional Kyoto Machiya townhouse, Jam Jar Lounge, whose owner hails from Australia, is open for breakfast and lunch on a daily basis. Staying true to the owner’s background, expect to find Australian classics such as a veggie fry-up breakfast and homemade brownies topped with ice cream. Drop in for the jazzy ambience, locally roasted coffee or an afternoon drink of imported wine.

Among the ramen shops and bars on the picturesque street of Kiyamachi Dori is foreigner-friendly gay bar Azure. Unlike many bars in Japan, you don’t need a membership to enter this charming, intimate joint, which is exclusively for men. Bar master Ao will welcome you with bar snacks, and if you’re lucky, a karaoke number in exchange for the ¥800 (£5.95) cover charge. Most drinks cost ¥800 (£5.95), so the final bill may be more than at some other bars in the area. But if you don’t mind digging a little deeper into your pockets, you’re guaranteed to have a great night at Azure.

For those on the hunt for a fun time that won’t break the bank, Oshabuta Kyoto is a bar that’s small in size but always packed with laughter. Partake in their yearly Halloween party, where the gay, lesbian and trans community of Kyoto come dressed up in their spookiest costumes to the sound of the latest pop hits. To find Oshabuta, follow the street sign that reads “Hanami Koji Dori” and look for a buzzer to the left of Tully’s Cafe. Once you’re invited into the bar (generally based on your appearance), pay the ¥1,000 (£7.45) entry fee for access to affordable long drinks.

Located a stone’s throw away from Kamo River, Bell Kyoto is a delightfully modern gay bar. The minimal, contemporary decor and copious cheap cocktails, including favourites such as gin and tonic, Moscow mule and Long Island iced tea, make this a great spot for a stylish yet affordable night out. If you prefer whiskey, select from a variety of Japanese, Scottish and American brands. Every night of the week, show off your karaoke pipes with friendly bar master Rin. The entry fee is ¥800 (£5.95) (or ¥1,000 (£7.45) for straight men and women) and women must be accompanied by a gay man to enter.