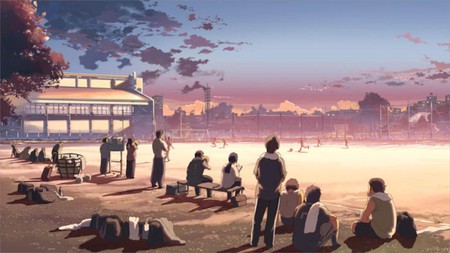 Just a few years ago, Makoto Shinkai was a promising young director who had made a decent dent in Japan’s anime landscape with films like The Garden Of Words (2013) and Children Who Chase Lost Voices (2011). That all changed in 2016 with the release of Your Name, the feature-length film that propelled him to worldwide acclaim. An instant classic, it was the sort of animated masterpiece that comes out of Japan once every generation, having the same impact reserved for other landmark films such as Hayao Miyazaki’s Spirited Away (2001) and Katsuhiro Otomo’s Akira (1988). His latest release, Weathering With You (2019), has already been met with warm reviews from fans and critics.

Shinkai’s films contain fantastical elements, but are rooted in real-world characters and places. He makes use of everyday locations to ground his stories in reality, helping to make them more relatable. Most of these places can be found amid the gleaming cityscape of Tokyo and are popular spots with anime fans, who take pictures recreating iconic moments from Makoto’s films. 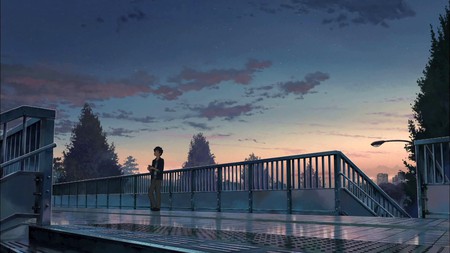 Author’s note: Spoilers ahead for ‘Weathering With You’ and ‘Your Name’

Makoto’s acclaimed 2013 short film tells the story of a teenage student’s chance encounter with an older woman, and the life-changing relationship that follows. Much of the narrative takes place in an inner-city park found nestled in Shinjuku, Tokyo’s business and entertainment district. The site dates back to the Edo period, when it was bequeathed by the Shogun to the Naito family in 1772. Destroyed during the Second World War, it was rebuilt and now contains English, French and Japanese-style gardens as well as a Japanese tea house. The covered benches near the Taiwan Pavilion are the rendezvous point for characters Yukari and Takao, who gather there whenever it rains to spend time with one another.

Suga Shrine in Shinjuku is a small hideaway where worshippers can enjoy some spiritual peace and quiet amid the hectic clatter of daily life. The Shinto shrine dates back to Edo-era Japan and was originally two different shrines until they were consolidated as part of the Meiji Restoration. The staircase leading to it has now become iconic among anime fans thanks to its inclusion in the climax of Your Name, when body-swapping teens Mitsuha and Taki finally meet years after the devastating meteor that wipes out Mitsuha’s hometown. The steps were used in posters for the film, and if you tap #sugashrine into Instagram you’ll find a flood of photographic tributes to the movie’s closing moments. 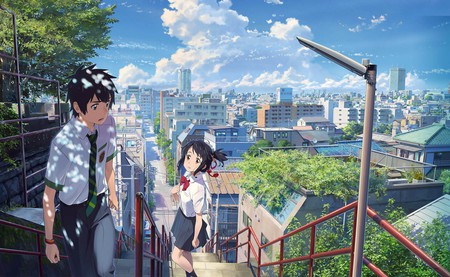 The stairs leading up to the Suga Shrine have become iconic among anime fans, thanks to ‘Your Name‘ (2016) | © Collection Christophel /CoMix Wave Films/ Alamy Stock Photo

The police station in Shinjuku is one of the busiest in the city, handling everything from lost and found to major crimes. A short distance from it is an intersection notable for a giant circular beam housing traffic lights for a busy intersection. This spot is used frequently in Your Name, in particular during a time-lapse montage soundtracked by Japanese alternative rockers RADWIMPS. The intersection also pops up briefly in other Shinkai works; it appears for a few seconds in his 2007 anthology 5 Centimeters Per Second and the accompanying manga.

Kabukicho (‘Weathering With You‘)

The beating heart of Shinjuku’s red-light district is crammed with love hotels, adult bookstores, cafés, restaurants, hostess bars and nightclubs. It also houses Golden Gai, the legendary grid of alleyways containing themed micro-bars. Such is Kabukicho’s reputation that it has the nickname ‘The Sleepless Town’, and it takes its name from plans in the late 1940s to build a Kabuki theatre in the area (said plans never came to fruition). It is here that protagonist Hodaka arrives after fleeing his home town at the start of the film. He spends his nights sleeping in cramped quarters at a manga café, one of many such businesses in the area, in between hustling for work and eating at McDonald’s, where he crosses paths with the film’s heroine, Hina. In the movie’s first act, he intervenes when Hina is groomed by local sleazebags to work in a hostess bar, and the two flee through the seedy side-streets. 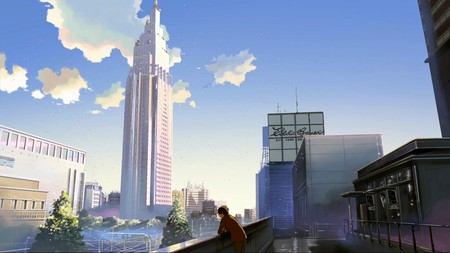 The Docomo building houses one of Japan’s biggest telephone networks, and features in the third part of ‘5 Centimetres Per Second’ | © Comix Wave/Adv/Kobal/Shutterstock (5879258e)

Yoyogi Kaikan (‘Weathering With You’)

In the film’s opening moments, Hina inadvertently discovers her weather-altering powers when she prays at a shrine on top of a disused building. You can find it if you take a stroll just past the NTT Yoyogi Docomo building in Shibuya (an area that is also home to the world-famous four-way pedestrian crossing). Visitors of any kind are strictly forbidden, though, as the site has been earmarked for demolition.

Presumably, Makoto Shinkai has a soft spot for the landmark skyscraper, which took 13 years to construct. The building holds offices and is also a storage site for Docomo, one of Japan’s biggest telephone networks. It appears across a number of Shinkai’s works: it features in the third part of 5 Centimeters Per Second, it looms over Shinjuku Gyo-en gardens in The Garden Of Words and forms the backdrop for scenes in Your Name and Weathering With You.