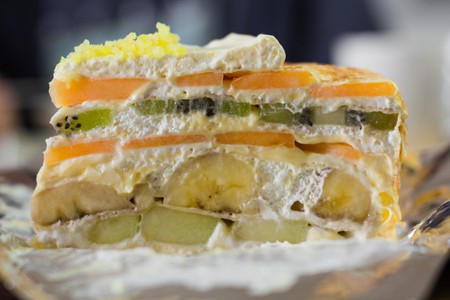 Japan is a food lover’s paradise. Whether it’s the classic umami flavours of traditional local cuisine, or the ridiculously over-the-top sweet crepes of Harajuku, there’s something for every palette. What’s so special, however, about eating in Japan is the nation’s love for experimenting and reinterpreting different dishes, which can result in some weird and undeniably delicious concoctions. From corn ice cream to curry donuts, here are some of the best and most bizarre Japanese food combos.

Getting its name from the combination of omelette and rice, omu-rice is one of the country’s most loved unconventional dishes. It’s the strange combination of fried rice, topped or mixed with ketchup and covered in a fluffy omelette style egg.

Commonly cooked at home, or in ‘Western style’ cafés and restaurants, there are as many variations on the dish as there are those who eat it; however, in terms of meat content typically chicken is the go-to choice. It came to popularity in the 20th century when Western food was starting to influence the local cuisine and has remained a menu staple ever since.

A food nightmare or dream depending on how you look at it, chocolate-covered potato chips definitely exist in Japan. Crispy, salty plain potato chips are smothered in silky smooth sweet milk chocolate. Usually available to pick up from most convenience stores, these naughty treats are the answer to anyone looking to satisfy all their junk food cravings at once.

The Royce’ confectionery company is considered the number one producers of the snack, so if you want to try the best keep a lookout for that name. Since their introduction, the company has also produced variations on the snack to include caramel and fromage blanc versions as well.

Perhaps not a very widely known culinary fact, but one that’s true nonetheless, is that Japan absolutely loves curry. Though a little more subdued in terms of spice compared to its Indian counterpart, Japanese curry is one of the main dinner staples on the fast food scene. It often beats ramen and sushi as the ‘go to’ stomach filler for weary salary-men making the late-night trek home.

Curry pan is a combination of Japanese curry wrapped in crumbed sweet bread balls and deep-fried. It’s probably not ideal as a regular snack, but the crispy, sweet texture of the fried bread and salty warm curry is definitely a taste sensation you have to try at least once.

Kind of milky and acidic, on paper Calpis sounds like the last thing you want to pick up to quench your thirst on a hot day, but actually it’s strangely refreshing. Considered one of the most popular soft drinks in Japan, Calpis is available at all convenience stores and in most vending machines across the country.

It’s so well loved in Japan, that people mix it with pretty much everything: alcohol, shaved ice, meat, there’s no limit to its versatility. Though it sounds gross, it’s been around for almost 100 years so there they must be doing something right.

This one sounds like something you make with the remnants of your fridge after a big night out, but in Japan it’s a common bakery item. It’s essentially savory Japanese-style stir-fried noodles stuffed into a sweet American-style hot dog bun, and it’s undeniably delicious.

Versatile in terms of toppings and sauces, it could perhaps be considered like the Japanese equivalent of a hot dog: so wrong it’s just so right. You can pick up yakisoba pan from street stalls, supermarkets and convenience stores across the country.

Though this may sound healthier than the others on this list, don’t be fooled – fruit sando is essentially a cake in sandwich form. Fresh, candy-like strawberries and kiwis are surrounded in fluffy cream then wedged between two thinly sliced pieces of sweet bread. Super cute and delicate, it’s commonly eaten as a snack at afternoon tea, it’s just another example of the Japan reinterpreting what a sandwich can be.

Bakery, Dessert, Ice Cream, French, 0
Facebook
Email
Twitter
Pinterest
Copy link
Share
A relatively new player on the local strange food scene, corn ice-cream is actually the creation of French-born pastry chef Dominique Ansel. Though he has outlets throughout the world, it’s his bakery in Omotesando, Tokyo that’s been making waves online thanks to the re-release of his popular local summer snack: Crème de la Corn. Quite literally ice cream on corn, the limited run treat is caramel ice cream served on a cob of soy sauce-braised grilled corn. Combining once again the undeniable combination of salty and sweet, it’s attention-grabbing snack that you can only try here in Japan.
Open In Google Maps
Give us feedback
Give us feedback