All Aboard: Riding the Rails With Monisha Rajesh 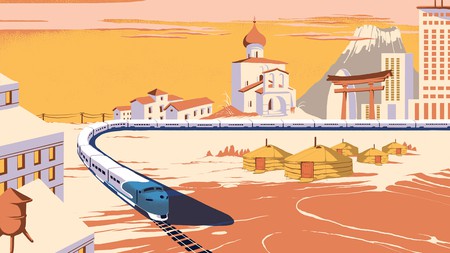 Following the release of her new book Around the World in 80 Trains, the author reflects on themes of boundaries and belonging among rail passengers across the globe.

A pair of bright-blue feet marked the edge of the platform and a queue had already formed behind them. Two elderly passengers pulled out foldable tripod stools and sat, fanning themselves, while others examined smartphones, picked at bento boxes or pored over magazines. No one spoke. Just as I wondered when the train would arrive, a sleek, bottle-nosed beauty sidled up silently, easing to a standstill. Unprompted, the queue moved to allow passengers to disembark, depositing, as they went, empty cans, napkins and wrappers into the plastic sack held open by an attendant, who bowed with thanks as if collecting gifts. When the carriage had emptied, two other attendants boarded, one at each end, and bolted up the aisle, polishing windows, wiping tables, sweeping the floor and turning the seats in the direction of impending travel. In under three minutes, they had finished. Marvelling, I watched as people boarded in single file, filling the rows from front to back. No one tried to bag a window seat; no one held up the queue stashing bags overhead. Once the carriage was full, the doors slid shut and the next passenger stepped onto the blue feet and waited. As the numerals on the clock overhead clicked, the Nozomi Shinkansen hummed away from the platform on its way to Osaka. 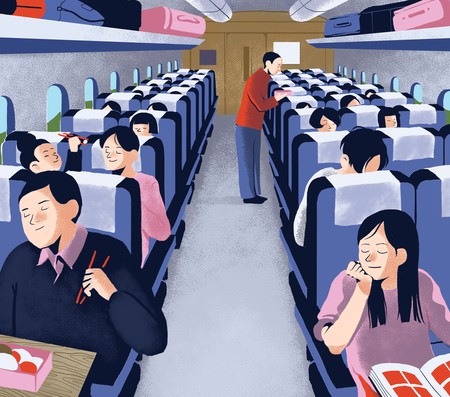 Four minutes later, another bullet train glided up the platform and received the same treatment. I boarded, inhaling the clean smell of polish and carpet freshener. It had just gone 1pm and all around me passengers were opening up their ekiben. These painted bamboo containers tied with bows are unique to each station and contain local ingredients ranging from pearly beads of salmon roe and compressed neon pickles to twists of squid and spheres of sticky rice scattered with seaweed. In the pleasing silence of the carriage, I glanced at the various lunches, each like a small jewellery box. The dynamism of Japanese train food reflected a national pride in perfectionism. I pictured myself back in the UK, travelling on a delayed Virgin Pendolino from Euston to Birmingham and chewing on a microwaved baguette. Crunching into a chunk of sweet yellow daikon pickle, I relaxed into my seat as the Shinkansen leaned into a corner then blasted up the coast so fast the view was nothing more than a blur.

Two months earlier, I had received a vastly different cultural awakening on the Godfather of Trains, the Trans-Mongolian from Moscow to Beijing. Just after 7am, at the peak of Siberia’s summer heat, I kicked off a bundle of sweaty sheets to the sound of eurotrance crashing up the corridor. Feeling the beat thump at my head, I swung my legs out of the battered faux-leather berth and made my way to the dining car, towards the din. The smell of cigarettes and old sweat greeted me as I pushed open the door, just in time to see a waitress receive a tight slap to her hot pants as she rubbed a rag across a tabletop. She winked at the guilty soldiers, whose breakfast comprised a six-pack of Stella, and brought me a spoon for my pot of instant mash and sachets of sugar for my tea. At the next table sat a bearded man in a vest and adidas slides. He had finished a four-pack of Hoegaarden and was working his way through a bag of blinis, spreading each disc with cream cheese. He frowned at my mash and shook his finger, pulling a face. I nodded back politely, unsure of whether or not to attempt conversation, given my Russian extended to no fewer than four words. The man called for a plate, spread a selection of blinis and passed them over. Nodding wordlessly, he gestured for me to try them; they were surprisingly sweet and delicious. 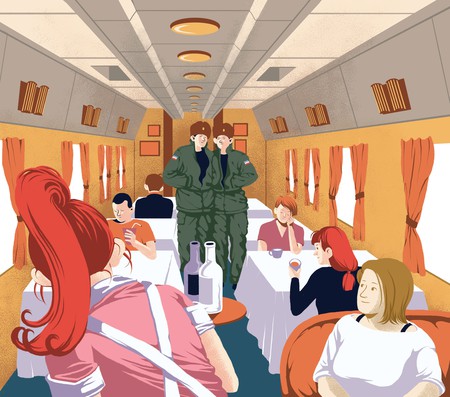 The first morning on the train, I hid in my compartment, terrified of being the only foreigner onboard. And I hadn’t imagined the hostility. Passengers turned to stare with open enmity, crushing cans underfoot, holding my gaze until I looked away and shoving my shoulder as they pushed by on the platform. But after a young English-speaking lawyer helped me buy cartons of juice, order a pork escalope and chips, and understand the Cyrillic timetables, the other passengers softened. He explained I was on a domestic service used by Russian commuters, rather than the faster, fancier Rossiya service favoured by tourists. It was unusual, he said, to see an English person on these trains – let alone a brown person – and the other passengers were suspicious. However, in joining in the card games, cracking open a few cans and accepting the blinis, I passed some kind of test and was welcomed into the fold; I even received a smoke grenade from the two soldiers as a parting gift.

My round-the-world rail journey was fast laying bare the bones of each country’s quirks and foibles, and nowhere was this more apparent than in America, where nobody ever takes trains – or so I was told. Americans fly or drive from one state to the next, preferring the freedom of their freeways to Amtrak’s rickety double-decker services racked with delays and derailments. But in one month of travelling with an Amtrak pass, I discovered an underworld of musicians, mechanics, teachers, students, journalists, the terminally ill, the Amish, retirees and runaways winding their way round the country by rail. Most were scared of flying, had lost driving licences or couldn’t afford the airfares, and boarded with carrier bags of blankets, cookies and bottles of Mountain Dew. Some wore old sweatpants, no socks and unlaced trainers, and slept face down on their seats; others dressed in twinsets and pearls, and emerged from expensive roomettes at the opposite end of the train. The latter were few and far between. They were taking a trip down memory lane or fulfilling a life-long dream to ride the rails “through their own backyards”. 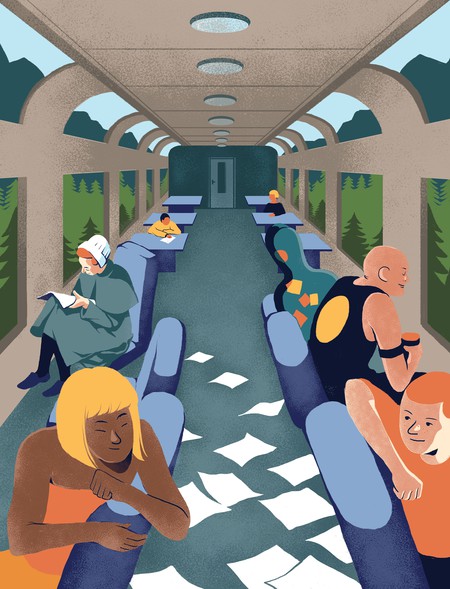 Yet the communal dining car broke down all boundaries, bringing the extremes of American society face to face over stacks of pancakes, chicken sausages and over-brewed coffee. Like a scene from the 1950s, train managers handed out timings for each meal sitting and rang a bell when it was time to dine, indiscriminately placing passengers side by side and opposite one another. On the Sunset Limited from New Orleans to Los Angeles, I sat across from Benny and Marie, a black couple in their 80s, who described travelling in segregated compartments as children, hidden at the back of the train when white people boarded. On the Empire Builder from Chicago to Seattle, I said grace and broke bread with Arlene and Russell, a bonnet- and braces-wearing German Baptist Brethren couple from Ohio, who enthused over deep-frying squirrels they shot in their yard.

At night, the old metal trains swung and snaked along the rails, horns clanging, slowing for freight and growing ever delayed. However, for all their physical failings, America’s railways were powered by human spirit and an intimacy of interaction I’d once given up on. On the surface, the trains were a wonderful way to skirt along California’s coast, wind up Colorado’s mountains and thunder over Montana’s plains, but at their core they provided a safe house for the fearful, a comfort for the elderly and a lifeline for the poor. Onboard was a ready-made, rolling community in which passengers were free to be as involved or as aloof as they wanted. Conversation and good food were never far away, and the sense of belonging was innate. The white noise of other people’s laughter, chatter and music offered a cloak of well-being, and the reassurance that, as long as you stayed onboard, you would never be alone.