9 Dishes You Need To Try in Hakodate, Japan 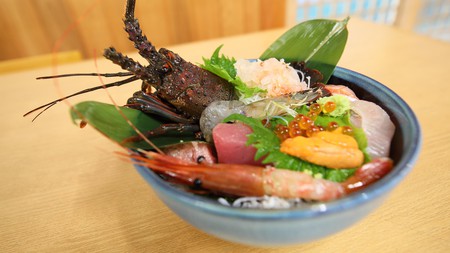 Surrounded by an ocean on three sides, Hakodate is swimming in world-class seafood. But the vast pastures of southern Hokkaido also deliver dairy that’s the envy of Japan. The result? A mouthwatering menu of meals that visitors must try in this hub of the Oshima Peninsula.

Hokkaido – Japan’s northernmost island, and an unconquered frontier until the 19th century – is much less densely populated than the Honshu mainland across the Tsugaru Strait. That leaves plenty of room for cows to roam and produce the rich, silky milk this part of the world is known for, while miles of coast haul in bounties of fresh fish. The city of Hakodate is the beneficiary, brimming with seafood markets, street-food stalls and refined restaurants between its famous waterfront mountain and the must-see Goryōkaku fort. From squid for breakfast to ice cream for dessert, these are the nine dishes that every traveller must try in Hakodate.

Southern Hokkaido’s celebrated milk is chilled into Hakodate’s favourite dessert on Minatogaoka Street in Motomachi. This two-block stretch from Motomachi Park and the Old Public Hall to the Hachimanzaka slope and the churches nearby is lined with ice-cream parlours, earning the nickname ‘Soft Serve Street’. The flavours are mind-boggling – pumpkin, kelp, wine, adzuki beans, melon, lavender, squid ink – so less adventurous eaters should stick to the simple vanilla soft serve. Shops around the Morning Market swirl the squid-ink variety, while Milkissimo in the atrium of the Goryōkaku Tower serves a sakura special when the cherry blossoms are blooming in the fortress across the moat. 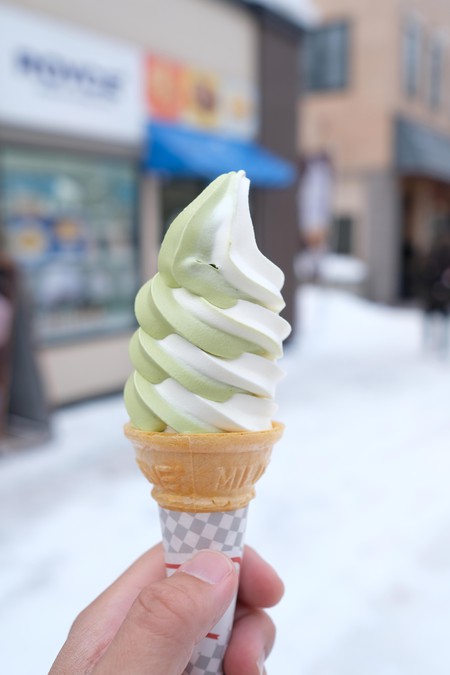 Squid from the Hakodate Morning Market

The Hakodate Morning Market sells both fruits and fruits of the sea. And among the rows of sea urchins, oysters and hairy crabs sits ocean-fresh squid – such a speciality in this city that Hakodate’s colourful manhole covers are decorated with cartoon octopuses. Get here early, as the Morning Market opens at dawn and closes at noon, with the best stuff selling out fast. The restaurants that ring the market stalls all have squid on the menu, served in a variety of ways, including sashimi, salted or stuffed with rice; ikameshi (rice-filled quid) is a Hakodate speciality, boiled so that the squid’s juices ooze into the grains. 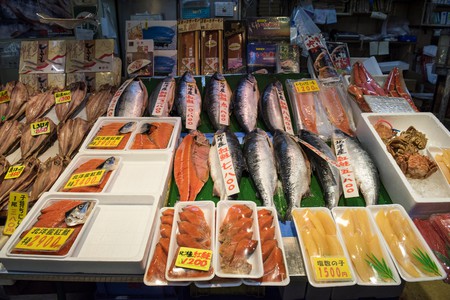 Not far from the Morning Market, Donburi Yokocho Ichiba is an arcade of 20 eateries plating up the drool-worthy seafood they purchased next door. The speciality here is kaisendon – a bowl of steaming rice with seafood piled high on top. Salmon roe, sea urchin, crab and thinly sliced layers of fish are common ingredients to adorn this bed of fluffy rice, which is a typical breakfast for intrepid travellers not afraid to start their day with seafood. 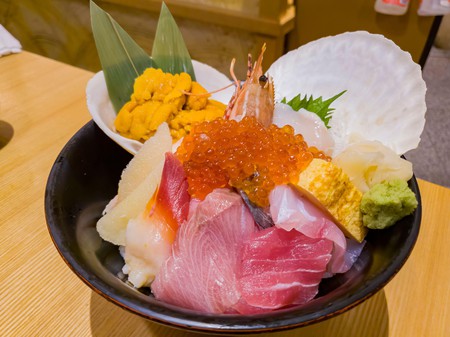 Hokkaido’s vaunted cow’s milk is also the key ingredient that makes Pastry Snaffle’s cheesecake famous. Using dairy from cows raised in the meadows of Onuma Quasi-National Park north of the city, its signature item is the Catch Cake – a velvet-smooth cheesecake, which also comes in a chocolate flavour. Fluffy-as-a-cloud cheese omelettes with mille crêpe cake is another house favourite, which visitors can sample at Pastry Snaffle’s five locations across the city, including one in the railway station.

A meal named after a brutal Mongolian emperor doesn’t sound all that appetising, but this mutton-and-vegetable dish is a Hakodate must-try. When the government shut down sheep farms everywhere but in Hokkaido a century ago, this part of the country was the only place left with mutton, making this a regional speciality. Jingisukan (the Japanese pronunciation of Genghis Khan) sizzles in skillets along Daimon Yokocho, an alley of street-food stalls near Hakodate station. Red lanterns illuminate this al fresco collection of 26 yatai (mobile food stands) and izakaya (taverns) – an affordable one-stop shop where diners can tuck into several south Hokkaido dishes. 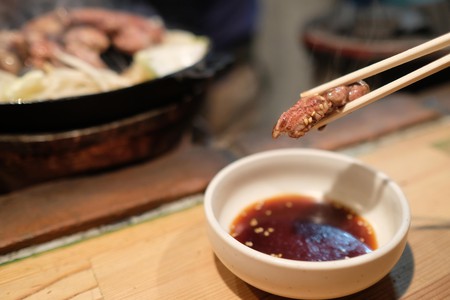 Built on the slopes of Motomachi in the 1850s, the Former British Consulate of Hakodate is a bastion of Britishness almost 9,000 kilometres (5,592 miles) from London. This elegant old office is now a museum that also plates up an oh-so-refined afternoon tea in its café. The Victorian Rose shows off all the trimmings you’d expect in the motherland – vintage furniture, tea cosies, floral porcelain and the like – for high tea and imported brews overlooking a lush rose garden, where 60 varieties bloom each summer.

Ignore the mildly terrifying clown logo – this place is a Hakodate institution. Lucky Pierrot has been flipping burgers since 1987, expanding to 17 franchises across town, including a convenient one in front of the Goryōkaku Tower. The patties are different than what diners would expect at McDonald’s – think squid, mutton and scallops – but its signature Chinese chicken hamburger is a crowd-pleaser, oozing a sticky sweet-and-sour sauce. Lucky Pierrot also serves curry, spaghetti and rice omelettes alongside all the American-style fast-food favourites. 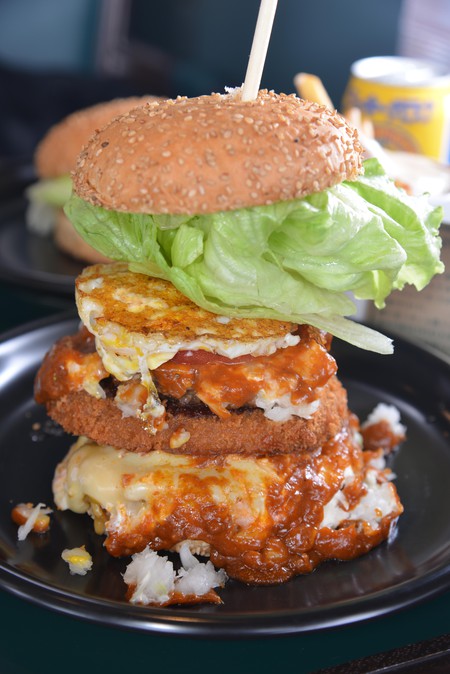 Every corner of Japan loves ramen, and Hakodate is no exception. Its local variety is called shio, or salt ramen – a clear, salty broth whose origins date back to the Chinese merchants who brought their noodles with them when they sailed into Hakodate’s port in the late-19th century. Kelp is added to the stock before chicken and pork complete this southern Hokkaido version. The Daimon Yokocho alley is a good place to give it a try, while Ajisai – with one location among the harbourside warehouses and another outside the walls of Goryōkaku – specialises in the stuff. Butter ramen, another Hakodate go-to, also makes the most of Hokkaido’s renowned dairy industry. 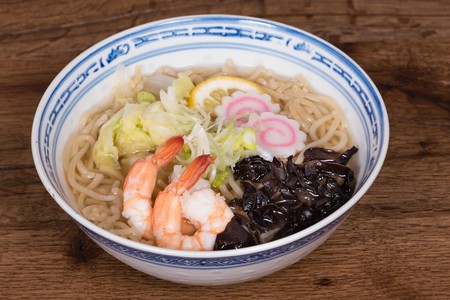 When Hakodate opened its port to the world in the 1850s, Europeans dotted the Motomachi mountainside with churches, as well as monasteries and nunneries further afield. Little did they know they’d make a serious contribution to Hokkaido’s cuisine. The resident monks and nuns made butter, jam, cookies and ice cream, all of which continue to wow visitors today. The Trappistine Convent – a hive of red-brick Gothic and Romanesque buildings that feels more like a castle than a place of worship – is hidden behind the Hakodate City Forest on the city’s northeastern fringe, but visitors make the pilgrimage for the butter cookies, which have earned a cult following. Nuns use that legendary local milk in their madeleines, cookies and butter candies, which are sold to support the convent financially.