Mythology in Art: Depictions of the Storm God Susanoo by the Masters of Japanese Ukiyo-e

According to Japanese mythology, the god of storm and sea Susanoo was one of three children born of the god Izanagi-no-Mikoto and the goddess Izanami-no-Mikoto. He is the brother of Amaterasu (goddess of the sun and hugely important figure in the ancient Shinto religion) and Tsukiyomi (the notoriously ill-tempered god of the moon). Dating back to the 8th century, the earliest written records on the ancient gods are fraught with tales of sibling rivalry, betrayal, and murder. Throughout history, several of Japan’s most highly regarded artists and painters have depicted the struggles of Susanoo and his siblings in their work.

Soon after being expelled from heaven for tricking his sister, Amaterasu, Susanoo descended to Earth where he met an old man and a young girl, both of whom were crying. He asked why they wept, and the old man told Susanoo of his misfortune. He had once had eight daughters, but every year an eight-headed dragon known as the Yamata-no-Orochi emerged from the nearby river and ate one of them; they knew the beast would soon return to take his last remaining daughter. Upon hearing of their plight, Susanoo agreed to help them by tricking the dragon into drinking several vats of sake until it became intoxicated and fell asleep. As the dragon slept, he drew his sword and hacked the creature to bits until the river ran with its blood.

This depiction of Susanoo and the dragon by the famous Kuniyoshi (1798 – 1861) shows Susanoo watching the creature swim before he makes his attack.

Another artist’s rendition of Susanoo and the eight-headed dragon, this time by the great Yoshitoshi (1839 – 1892). 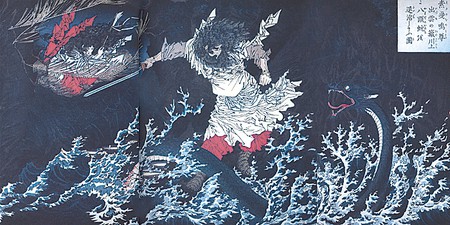