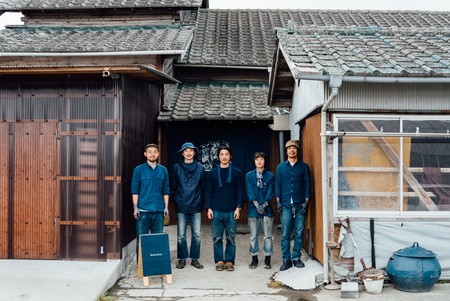 Making natural indigo dye – sukumo in Japanese – is back-breaking work. For the five young minds behind BUAISOU, a collective of farmer-artisans in Tokushima prefecture, it’s become an obsession. Attending London Craft Week, co-founder Kakuo Kaji explains the labour of love behind the brand’s coveted range of clothing and homeware. 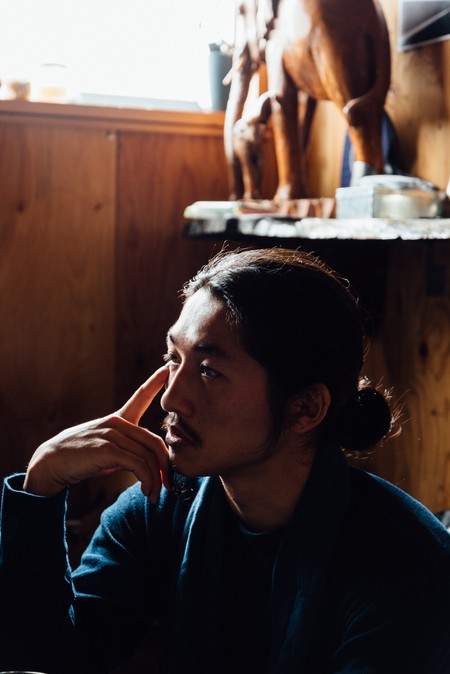 Kakuo Kaji’s nails are a brilliant shade of blue. I notice this as he holds up the two loose corners of the square piece of wet cloth that’s pinched between my fingers, and gestures for me to flip it over so the indigo dye doesn’t all seep down to one side and leave the fabric unevenly coloured once it’s dry.

Kaji is at London Craft Week to launch a collection of indigo-dyed items produced by BUAISOU, the collective of farmer-artisans he co-founded in Japan’s Tokushima prefecture in 2012. Speaking through a translator at Kiosk N1C, the shop in Coal Drops Yard in King’s Cross that’s the sole UK stockist of the brand’s clothing and homeware, he runs through the ingredients that go into natural indigo dye – sukumo (dried and fermented indigo leaves), wood lye, wheat bran and shell ash – and the laborious process involved in transforming crop into colour, and then colour into finished items. 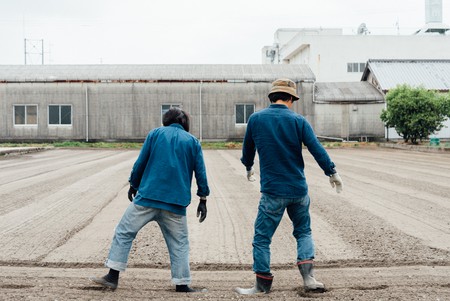 He then demonstrates how to apply the indigo to a piece of fabric. Tie-dye style, he first applies various folds, clamps, twists and pleats that will create patterns by preventing parts of the cloth from making contact with the dye; next, he dips the fabric into a smelly vat of viscous, fermented indigo, and massages it, submerged, by hand (the longer it is left in there, the deeper the colour becomes); once extracted, he washes the cloth in water then pats it dry. Over the next few days, several more washes will be required to make sure the colour sticks. 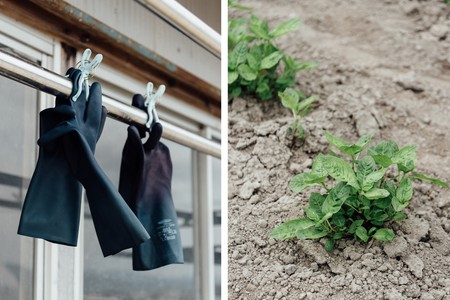 The teaching session must be light relief for Kaji, who is accustomed to a far more gruelling routine back on the farm, where he routinely works 13-hour days. Indigo, BUAISOU claims, is the most difficult dye to produce in the world; indeed, the process the collective uses is referred to as jigoku date, which translates as “producing hell”. Across the world, natural indigo – once used to make jeans – has long since given way to synthetic blue dye as a mainstream product. While an adequate substitute colour-wise, synthetic dye doesn’t last nearly as long or produce as luscious a hue as true indigo. In Tokushima, the heartland of Japanese indigo production, the number of aishi – someone who makes sukumo – has fallen from 2,000 in the 19th century to just six today; farmers have quit the back-breaking work of making the dye in favour of more lucrative crops with higher yields.

One of the six remaining producers, BUAISOU comprises four farmer-artisans and one communications, marketing and branding manager, who came to Tokushima as part of a government initiative to attract young people to rural areas – the survival of which is threatened by rapidly ageing populations – and revive traditional livelihoods. Kaji, meanwhile, worked in the municipal “indigo experience centre” before carrying out an intensive three-year apprenticeship with a local sixth-generation master producer of sukumo, Osamu Nii. “It’s very much an artisanal profession, passed down to one generation after another on a verbal basis,” he says. The others – an ex-banker, a fashion graduate and a former architect – subsequently joined him in his own enterprise. As a boy, Kaji helped out in his father’s paddy fields, but a degree in textile design didn’t exactly set him up for a career in farming. Today, working outdoors among the plants is his life. 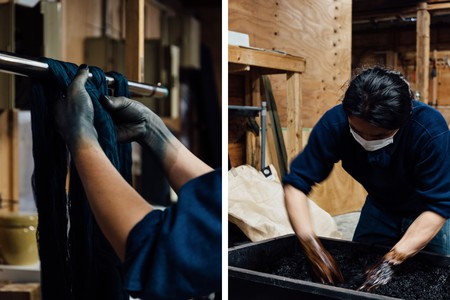 What sets the collective apart isn’t just the youthfulness of its members but their approach. Kaji and his colleagues not only plough, fertilise and weed the land; plant, water, harvest and dry the crop; and work this raw material into sukumo through a 120-day process of watering and stirring; they also design, dye and sew their own line of shirts, shorts, jeans, bandanas, bags and shoelaces; produce their own packaging and branding; and manage a robust social media presence, which has attracted 30,000 Instagram followers from across the globe. Through this ‘farm-to-closet’ approach, they are reviving two Japanese heritage crafts: farming and dyeing. The former, Kaji observes, is a 365-day process; the latter takes just six minutes.

Kaji hopes the combination of a holistic process, minimalistic, fashion-conscious designs, and expert branding and marketing, which showcases the process behind the products in a manner perfectly suited to the social media era, will help sustain BUAISOU. What’s more, the brand’s growing fame means it now occasionally takes on apprentices from around the world. “This one girl from Singapore stayed for two years,” Kaji says.

Whether working in a rustic barn, which doubles as a studio, or out in the fields, exposed to the elements, these five young makers are living in the present, engaging in something that is both timeless and completely new. 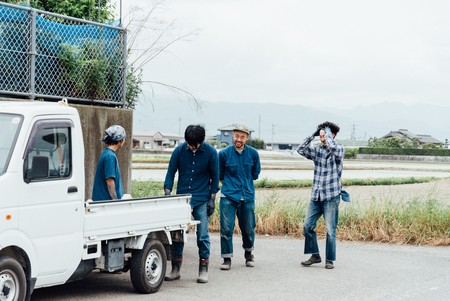 By combing heritage crafts with modern branding and marketing, the BUAISOU collective is reviving an industry and a region in rural Japan | © Maki Hayashida / Culture Trip