Miyajima Island Itinerary: How To Spend a Day in Itsukushima 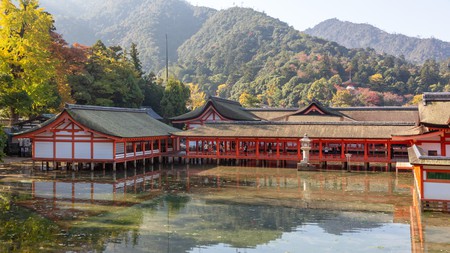 Miyajima’s floating torii gate has become one of Japan’s most recognisable images as well as a famous sightseeing spot. Easily accessed from Hiroshima by train and ferry, the island is home to hundreds of wild deer as well as fresh oyster shacks and historic temple complexes.

The island of Itsukushima is more commonly known as Miyajima, meaning ‘shrine island’, and is best known for Itsukushima Shrine, a UNESCO World Heritage Site. The island is small enough to be explored easily on foot, yet large enough to contain enough sights and activities to warrant spending a whole day there. Stroll through the shopping arcades browsing handcrafted goods, dine on fresh oysters and mingle with the tame deer who roam the streets, undaunted by the thousands of visitors who flock there daily to take photos. 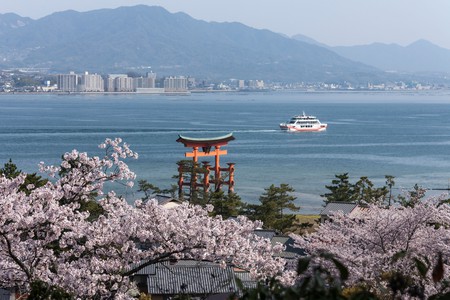 Enjoy a ‘morning set’ for breakfast

If you arrive early on the island and are looking for a breakfast spot, there are a few cafés on the way to Itsukushima Shrine that open at the start of the day. Look for signs advertising ‘morning sets’ – these are usually discounted meals that include coffee and breakfast items. Places of note include Coffee & Bakery Shima, where the morning set includes thick slabs of buttery toast made from their fresh-baked bread and served with eggs and salad, and the scone or sandwich sets at Sarasvati, which operates its own roastery and café out of a converted warehouse.

Just a five-minute walk from the ferry pier, start the day’s activities by visiting the famed torii gate, which marks the entrance to Itsukushima Shrine. The shrine itself was constructed 1,500 years ago, and visitors can wander between its lantern-lined, red-painted columns, and across the peaceful wooden walkways, watching the sea ebb and flow underneath.

Depending on the time of day you visit, the views from the shrine are likely to vary. Visiting during both high and low tide have their advantages, though. The best views can be seen during high tide, where the torii gate appears to be floating on the water; whereas during low tide, visitors can walk out to the gate and examine it close up. Check the tide times in advance online or stop back later in the day if you can’t quite catch high tide the first time around.

Next to Itsukushima Shrine and also worth a visit is a five-storied pagoda, originally built in 1407. Dedicated to the Buddha of medicine, this structure is over 27 metres (89 feet) in height.

Experience a tea ceremony in a Zen temple

Head away from the crowds of the shrine and take a short walk back towards the ferry port to the quieter Tokujuji, a 300-year-old Zen temple where visitors can take part in a traditional Japanese tea ceremony. The hour-long ceremony costs ¥5,000 (£36) per person or ¥10,000 (£73) with a kimono fitting, perfect for those that want to fully embrace the experience. The roots of tea ceremonies lie in Buddhist culture, and date back hundreds of years to when green tea was first imported to Japan by Zen monks, who used it to stay awake during long periods of meditation. 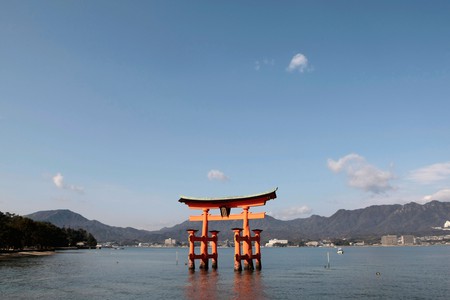 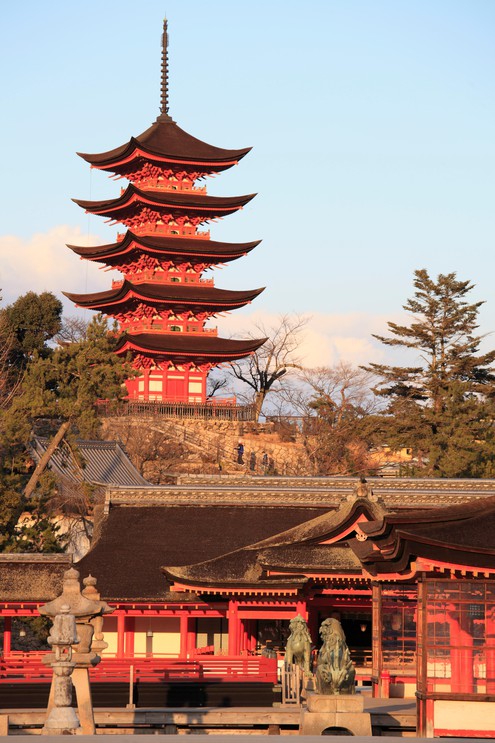 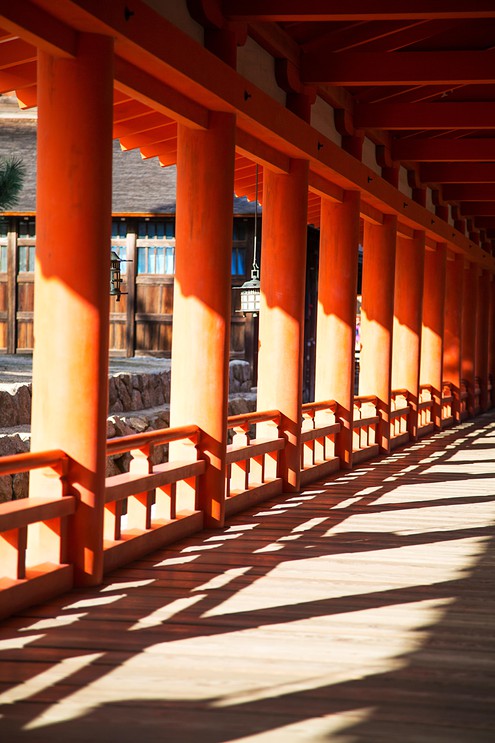 Stroll back to the island’s shopping area for some lunch. The Omote Sando area is teeming with small, independently owned restaurants offering a mix of Japanese and Western dishes. For an island specialty, go for the local oysters, known as kaki in Japanese, which are one of the must-try dishes. The Hiroshima bay area is one of the biggest oyster-producing regions in Japan and you’ll find no shortage of outlets to try them on Miyajima, from rustic beach shacks selling raw oysters and curry-oyster doughnuts, to family-run restaurants serving kaki fry (deep-fried oysters in breadcrumbs). Another famous food item is the rice burgers you can find on Miyajima, where traditional burger buns are replaced with rice patties. Finally, the Hiroshima area is famous for its okonomiyaki savoury pancakes, which you’ll find are a staple item on most menus on the island.

Glide to the top of Mount Misen

After lunch, ride the ropeway to the peak of Miyajima’s highest mountain, Mount Misen, for panoramic views of the island and surrounding Seto Inland Sea from the observatory. Other points of interest on Mount Misen include the Kiezu no Hi (eternal flame) – a holy fire that has been burning for over 1,200 years since it was used for training in AD 806 by Kobo Daishi, one of Japan’s most revered Buddhist monks. Walking around the summit, there are several other halls to visit which are part of the island’s Daishoin temple complex, along with holy rocks engraved with Sanskrit characters. After spending time at Mount Misen, you can either take the footpath back down the island or hop on the ropeway once more.

If you only buy one souvenir during your time on Miyajima, make it a momiji manju (a palm-sized sweet sponge cake baked in the shape of a maple leaf). The most common filling is anko (sweet red bean paste), however, it’s also possible to purchase them in other flavours, such as chocolate or custard. Sweet lovers can try their hand at baking their own momiji manju at the Yamadaya store. Yamadaya is one of Hiroshima’s most well-established manufacturers of these sweets, and has been operating since 1932. The momiji manju hand-baking experience runs four times a day and lasts around 45 minutes. Six cakes are included within the cost of the experience, making it an ideal snack for later on or a tasty souvenir to take home.

Miyajima’s shopping district, Omote Sando Shotengai, is filled with individual boutiques selling handmade products. Locally produced items include traditional pottery known as dorei, often designed in the form of animals, or decorative items, examples of which can be seen around the Itsukushima Shrine. Giant rice scoops, which are used to attract good luck and fortune, are also products that catch the eye of passing tourists. If you don’t fancy hauling a two-metre (6.5-foot) rice scoop on the plane ride home, regular-sized wooden rice scoops handmade on Miyajima are also a popular souvenir. 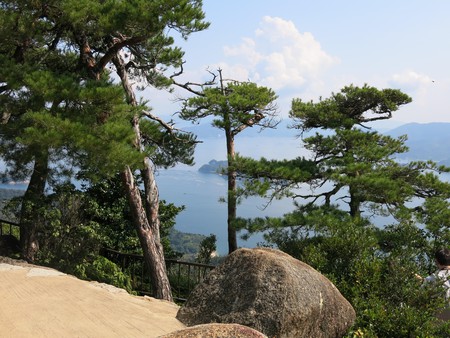 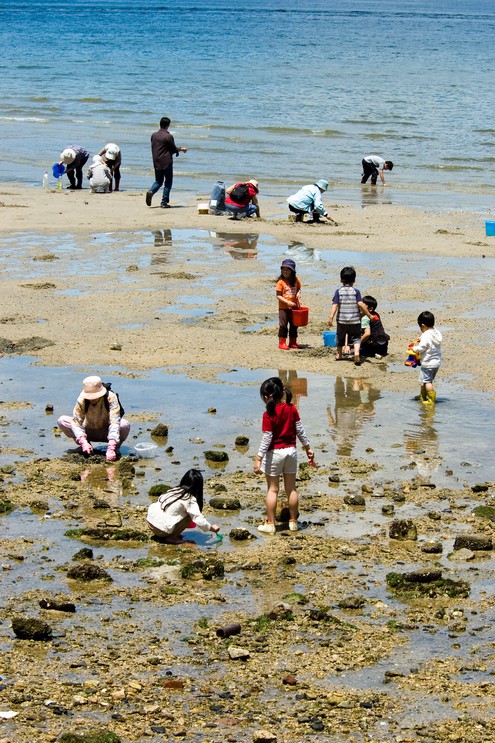 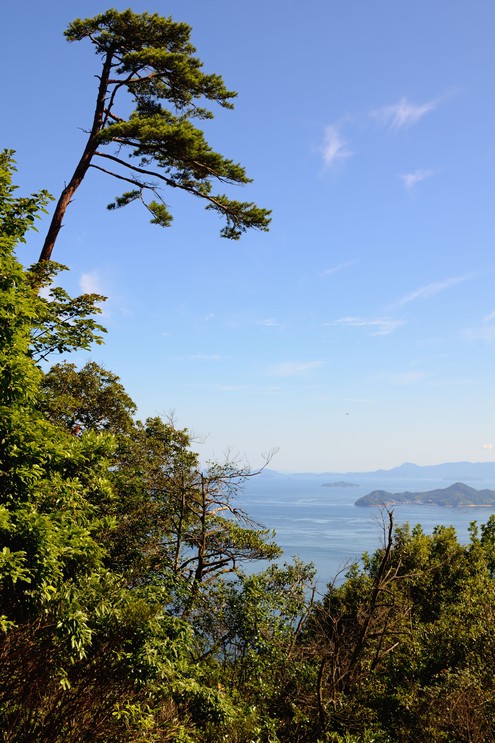 Admire the sunset from Mount Misen

Evenings on Miyajima island tend to be quieter as most visitors head back to the mainland at around 5pm, their departure signalling to many of the local businesses to close up for the day. If you have time to spare, though, it’s worth sticking around to catch the sunset and soak up the atmosphere after dark. Take in sunset from the top of Mount Misen, or head back to Itsukushima shrine for Instagram-worthy photo opportunities as the sun goes down. If you’re not stopping overnight, remember to check the last ferry times back to Hiroshima – the last boat usually departs around 10.30pm.

Find peace at an onsen

After a day of sightseeing, a typically Japanese way to relax is with a visit to a hot spring or onsen. Miyajima has several hotels that offer day passes to those who would like to visit the baths, some of which also offer rotenburo (open-air baths that often provide scenic views). One establishment open to non-guests until 10pm is Miyajima Kinsuikan hotel, a seafront property that charges ¥1,400 (£10) per adult for use of the baths.

Before dinner stop at Miyajima’s only brewery to taste some beers. Miyajima Brewery has nine original beers to choose from, with a popular flight set that includes three beers for ¥1,200 (£8.70) each. Nearby bar Bambino is one of the few places to stay open late in the evening and is open most nights until 1am serving pizzas, wine and beer.

Savour a ‘kaiseki’ meal for dinner in Miyajima

One of the best dining experiences you can have on Miyajima is a kaiseki meal at one of the island’s Japanese inns, known as ryokans. Kaiseki is a Japanese fine-dining experience and usually consists of a set meal featuring seasonal and local ingredients. These types of meals tend to be included within the price plan of ryokans and are typically served inside your room to create a private experience. For those visitors not staying overnight, Mame Tanuki restaurant serves dinner until 9.30pm and specialises in eel and oyster dishes, or check out Yosakoi restaurant, open until 10pm. 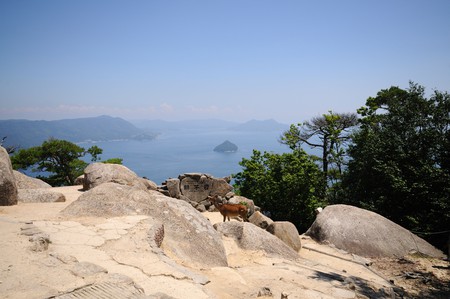 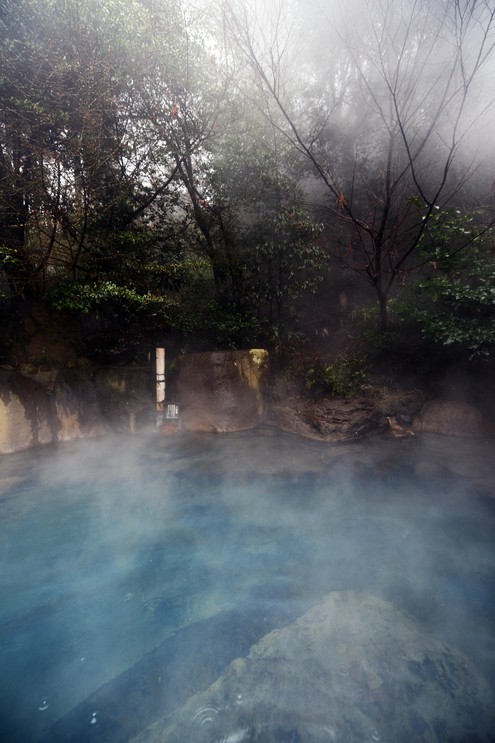 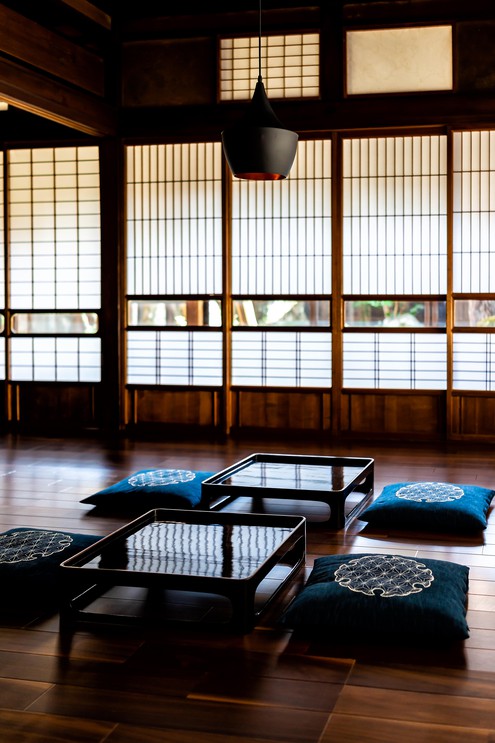