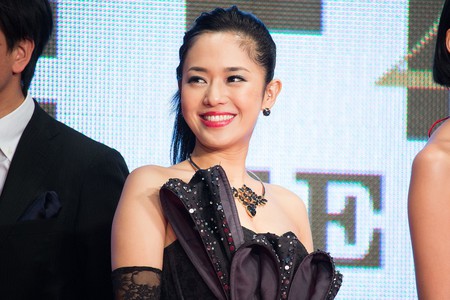 And yet, that has been Sola’s outlier trajectory. She has done all this without attaching herself to any Simon Cowell-esque svengali or disowning her early career. In the process, she has become an unlikely ambassador for Japan, travelling overseas to engage with fans, learn the language of other cultures and even do charity work.

Across Asia, she is a hugely prolific face in popular entertainment, recognisable to audiences of varying ages thanks to her work in Japan, Korea, China (she is currently learning the languages of the last two), Thailand and even Indonesia. Actress, model, TV personality, DJ, brand ambassador and even singer; not bad going for someone who originally wanted to teach pre-schoolers.

Year of the DOG in the Oriental Zodiac this year! * 今年は戌年。

Born in 1983 in Tokyo, Sola (her stage name translates as ‘Blue Sky’) worked in various bars and restaurants before being scouted in Shibuya by an agency for ‘gravure’ modelling – glamour modelling by any other name – and eventually moving into what the Japanese call ‘adult video’ with a series of wildly-popular films. In a 2008 interview with the website Metropolis, she said: “Originally, I wanted to become famous, so I decided to do anything I could…the people in the past had shady backgrounds, but I was loved by my parents and brought up in a compassionate family. I might be the first person with a normal background. I wanted to be the pioneer. Eventually I want to get married and have children. No other successful actresses from adult video have become a mother, so in this sense I want to be a pioneer as well.”

By 2003, she was making her first forays into mainstream media, appearing in 2003’s fantastically-titled Gun Crazy 4: Requiem For A Bodyguard. She followed this up two years later with another theatrical release, 2005’s Stop The Bitch Campaign: Hell Version. By then her status as an adult video idol in Japan was all-conquering and she ranked highly in internet searches.

By 2006, Sola was a regular sight on Japanese variety shows and began acting on late-night TV, with her first break coming in the form of manga adaptation Shimotika Glory Days, an adaptation of the comic about a young male student who shares a house with five other women. Not long after that, she gained a role in the J-drama detective show Galileo. At around the same time, she branched out into music and became a member of Ebisu Muscats, a J-pop collective comprising gravure and AV stars.

Outside of Japan, Sola was able to raise her profile thanks to an appearance in a mainstream Thai movie, Hormones, in which she plays an alluring Japanese tourist who crosses paths with a teenager pondering the mysteries of love. The film went on to win an award at the fourth Asian marine film festival, adding yet another feather to her bow. She followed this up by branching into Korean drama with the show Korean Classroom and the intense, atmospheric Hong Kong thriller Revenge: A Love Story.

For audiences in the West, Sola was an entirely unknown quantity until another of her theatrical releases got a limited release in the UK. Kyonyu Dragon (released overseas as Big Tits Zombie) sees Sola playing a stripper who is forced into becoming a chainsaw-wielding saviour of humanity when her strip club finds itself at the ground zero of a zombie outbreak. A mixture of Russ Meyer, Takeshi Miike and George Romero, it was directed by Japanese satirist Takao Nakano and works as both late-night grindhouse nonsense but also as a takedown of male-oriented Japanese culture. All of the male characters in the film are stupid, lazy, useless or just outright perverts. Only the women are fierce enough to take up arms in order to combat the undead and save the day. The film is utterly ridiculous from start to finish but also huge fun.

Sola has continued to appear in a slew of films and TV shows across Asia, and was even able to pay a visit to Watford FC as the brand ambassador for club sponsor, online betting chain 138.com. But it was in China where she achieved superstar status against the odds. Despite the fact Twitter is banned over there, Chinese fans were able to discover her account when she announced she would do her bit to raise funds for victims of the 2010 Qinghai earthquake. A devoted following began. In late 2010 she opened an account on Chinese microblogging site Weibo. Her first entry received 32,000 comments and was shared 48,000 times.

To date on Weibo, she has notched up a staggering 18 million followers. Her rise to fame in China hasn’t always been the smoothest ride. In 2012 she courted controversy when she weighed in on the contentious issue of the Diayou Islands. Otherwise, however, she is regularly mobbed whenever she visits the country, all the more impressive when one considers the often testy nature of Sino-Japanese relations.

Last month, many of her followers’ hearts were shattered when she made the shock announcement via Instagram that she had gotten married to Japanese musician DJ Non.

In a recent post via her official website, she commented on the news with her trademark mix of frankness and down-to-earth charm: “I’ve always wanted to get married. I love kids, and it’s always been my dream to start a lovely family.

“I don’t regret my previous job, but I know that it could have been a serious problem for marriage. Whoever I get married to would have to be understanding of this. He’s been great.”

“To all of my fans and associates, I am still the same Sola Aoi I have always been, and I look forward to your continuing support.”