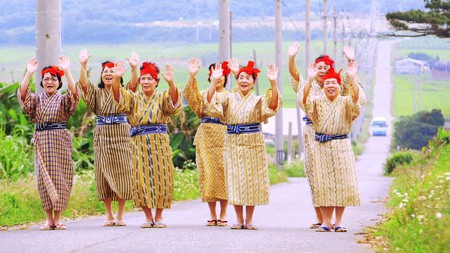 If there are two things Japan does better than anywhere else in the world, it’s pop idol groups and outliving everyone else on the planet. So it’s only natural that Japan boasts the oldest pop group in the world, KBG84. The 33-strong member group has an average age of 84 (some members are in their late 90s), and they’re constantly proving to the world that age is quite simply just a number.

Life expectancy for women in Japan is 90 and for men 84, which is pretty impressive. However in the stunning beachside island prefecture of Okinawa, the southernmost part of Japan, 90 is nothing – in fact five times as many Okinawans live to be 100 years old compared to their neighbours elsewhere in the country.

Okinawa is a string of around 160 subtropical islands that are dotted along the southern end of Japan, to the east of Taiwan. Scientists and sociologists have been hypothesizing why the locals of Okinawa live so long for a while now, and there are a number of theories. One is the prefecture’s laid-back attitude, a far cry for the hard-working salary men and women of Tokyo. This laid back attitude combined with manual labor, a fresh diet of locally sourced foods and the very friendly climate are all thought to contribute to the area’s youthful elders.

When it comes to youthful elders, KBG84 are the epitome of Okinawa’s fun-loving and hard-working ethos. Since their formation, the group has toured around the nation performing energetic shows to crowds of admirers just like any other J-Pop group. They’ve also released a few viral hit singles and videos, including the track ‘Come on and Dance’, the clip for which features the J-Pop stars in their stunning and scenic hometown of Kohama Island.

A play on the name of Japan’s biggest and most popular J-Pop act AKB48, KBG84 was the brainchild of Kyushu-born musician Kikuo Tsuchida, who has lived on the Kohama Island for over 20 years now. Inspired by the energy of the town’s seniors, he decided to start the group, the only real restriction being that you must reach the minimum age requirement 80 to be a member.

Mixing young J-Pop attitude and addictive youthful energy with traditional style dancing, and classic min’yō (Japanese folk style) instrumentation, the group creates little pop gems that make you smile. What they lack in vocal gymnastics you’ll agree they make up for in enthusiasm. Despite their advanced age, they continue to touch and inspire people around the globe, proving that you’re never too old to have fun.