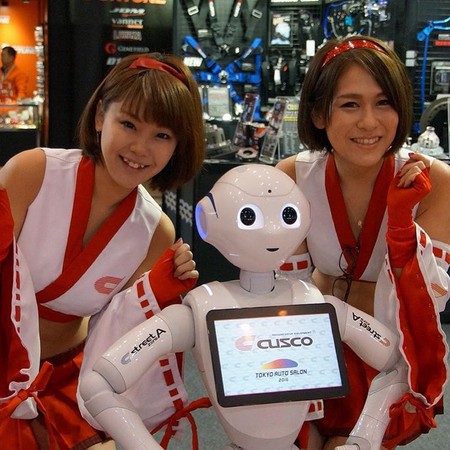 Although Japan has been considered the technology mecca of the world, a lot has changed during the past 20 years or so. Since the tech boom of the 1980s, the country’s reputation has fallen behind other innovative nations, but it looks as though they’re staging a comeback—one of a very unique sort.

Enter Pepper, the robot Buddhist priest. Visitors to Japan might recognise this cheerful animated face as the humanoid assistant at many tech and communication stores around Japan, most notably as the first point of contact at many Softbank outlets. But it seems Pepper is undergoing a career transformation. Recently unveiled at the Tokyo International Funeral & Cemetery Show, Pepper debuted his new role as a Buddhist priest for hire.

Pepper is now programmed to recite religious sutras while beating a drum, and his new skills could save people a whole stack of money and hassle during this sensitive time. Nissei Eco Co., a plastic molding manufacturer, programmed this new software and hopes to help solve a problem caused by the country’s simultaneously ageing and shrinking population. Today’s Buddhist priests receive less and less financial support from their local communities than ever before, which has forced many to find part-time jobs or alternate careers. Pepper can now step in when priests are unavailable, and at a fraction of the cost, as well. It reportedly costs only 50,000 yen (around $500 USD) per funeral for Pepper, versus the more than 240,000 yen (about $2,000 USD) for a human priest.

Doing our last minute shopping 😅 at the largest AEON mall in Japan, Thanks to Pepper (robot) for helping us out 😅 #pepperrobot #eonmallokayama #onlyinjapan #japanrobot

Although the intentions might be good, ultimately, there seems to be little genuine interest in hiring a robot priest—which is perhaps not surprising. The only thing this robot priest really has on a real priest is that it can livestream the ceremony, if needed.

But the weirdest thing about this story? It’s not even the first robot priest invented. In May this year, German inventors unveiled BlessU-2, another robot priest programmed to deliver blessings in five different languages. If they want to reclaim their tech master title, it looks like Japan will have to go back to the drawing board.