Maiko: Inside the Life of an Apprentice Geisha 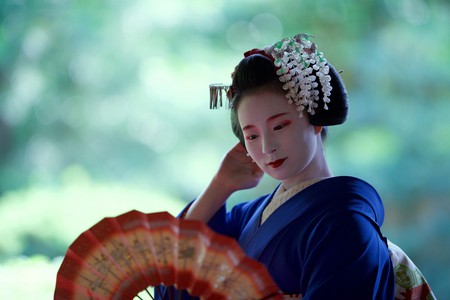 The life of a maiko requires a lot of self-sacrifice and self-discipline. Because of this, it’s a very difficult but respected profession. The world of the geisha is still a mysterious one to most people, and that’s the way they like it. Get a glimpse behind the scenes of today’s maiko and hangyoku (apprentice geisha in Tokyo).

In Kyoto, maiko (dancing girls) are apprentice geiko (the Kyoto term for geisha), while in Tokyo, hangyoku“(half jewels) refers to apprentice geisha. Both geiko and geisha mean something like “artist.” Being a maiko or hangyoku is challenging. In Kyoto, which adheres to the strictest traditions of the trade, maiko usually enter at around age 15. There are local laws in Kyoto that allow the young girls to enter the trade and forego high school, which is normally mandatory until age 18. Tokyo has no such laws, and a hangyoku‘s training can begin at age 18. 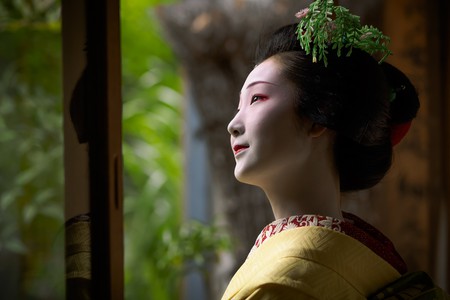 A maiko in full makeup and regalia | © gaap/Kyoto Flower Tourism

A very young apprentice might start off as shikomi, but this is not common. Shikomi will help out around the okiya (geisha house) where the geisha live. They might walk with apprentices and geisha to their appointments, holding their bags or running small errands and slowly learning about the trade. These days, there is no need to be a shikomi before becoming a maiko.

When a girl decides she wants to be a geiko or geisha, she must find an okiya and okasan (“mother”, the proprietress of the okiya, also known as an okami-san) who will accept her. Once accepted, she will study the performing and cultural arts required to work as a geisha on almost a daily basis. For example, she’ll learn the geisha dances, how to perform a tea ceremony, flower arranging, how to wear kimono, and how to play at least one instrument. The type of dances that an apprentice learns varies depending on which school of dance her hanamachi (geisha district or community) is aligned with.

Even after she’s a practicing geisha, she will still attend classes to keep her skills sharp. In Kyoto, the training is especially strict and rigorous, and as a result their geiko are the most sought-after in all of Japan. 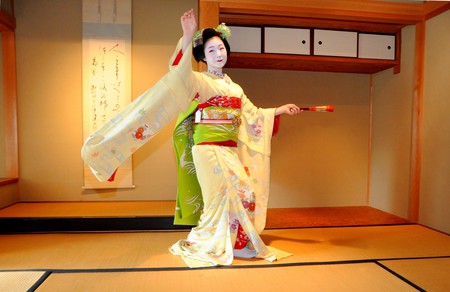 The training period of a maiko or hangyoku can be as long as five years. But being a maiko is actually optional altogether. Women who are already around the age of 23 can choose to start as geisha. However, progressing normally through the stages from apprentice to geisha adds to her reputation and prestige. And even if a woman chooses not to be a maiko, she will still be considered an apprentice for at least one year. She won’t wear the traditional katsura wig for which geisha and geiko are known, and she won’t wear the traditional shiro-nuri makeup. Only when her okasan decides she’s ready will she become a fully-fledged geisha. 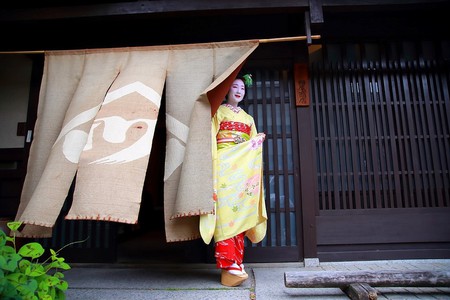 A maiko’s transition to geisha is celebrated in a ceremony known as erikae, “turning the collar.” She will no longer wear the long-sleeved furisode and dangling darari obi of an apprentice. She can now wear the katsura (wig) instead of having her hair frequently styled, and exchanges her cumbersome okobo (sandals with large wooden bases) for stylish zori (sandals). 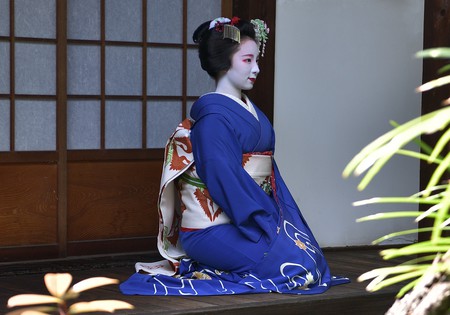 Maiko wear the most elaborate kanzashi, kimono and obi | © Tatsunosukefujiwara/Kyoto Flower Tourism
Give us feedback