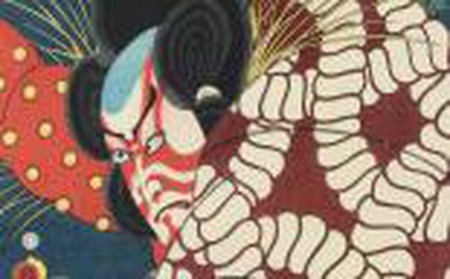 Kunisada, ‘The Dance Forms of Flourishing Edo Pictures’, 1858. This print shows a theater interior. The play being performed is ‘Wait a Moment!’, with the lead actor making his entrance on the raised passageway at the left. In the center are the regular seats, where members of the audience eat, drink, and chatter during the performance. Waiters move among them delivering refreshments. Along the sides of the theater are the more expensive boxes. | © National Museum of Scotland. 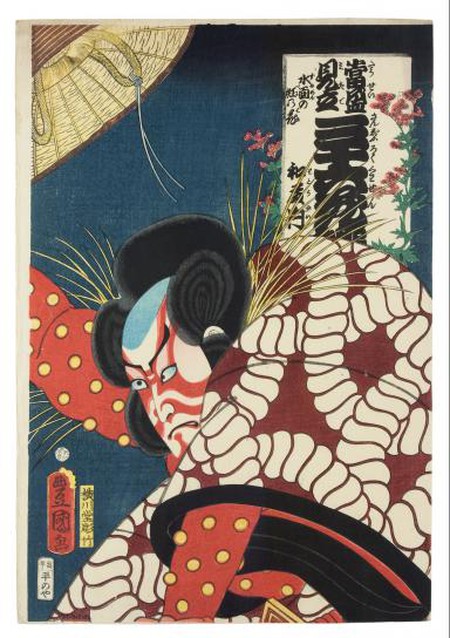 Kunisada, Design from the series ‘Thirty-six Selected Floral Parallels’, 1861. This is the promising young actor Kawarasaki Gonjūrō I, one of several sons of the star actor, Ichikawa Danjūrō VII. Using the name Danjūrō IX, he would become one of the superstars of the Kabuki world | © National Museum of Scotland

Toyokuni, ‘Scene from the play Butterfly and Phoenix Mountain Dance’, 1819. A quest to recover a lost treasure drives apart two friends, Chōkichi (right) and Chōgorō. In this scene, they have recovered two precious calligraphy scrolls, bearing the characters for ‘Dragon’ (right) and ‘Tiger,’ and have discovered they are in fact brothers. They are at Shinagawa with their sister O-Seki, about to take revenge on the man who killed their father. | © National Museum of Scotland

Kuniyoshi, Onbō Canal scene from the play ‘Ghost Stories at Yotsuya on the Tōkaidō’, 1836. In this gritty, ’raw real-life play,’ Tamiya Iemon (left) tires of his wife O-Iwa after she gives birth and poisons her so that he can marry his neighbor’s attractive young daughter. He then kills his servant, Yohei, and nails both bodies to a door, which is dumped in the canal. This print shows the horrific moment when he is out fishing and the decomposing corpses reappear. | © National Museum of Scotland 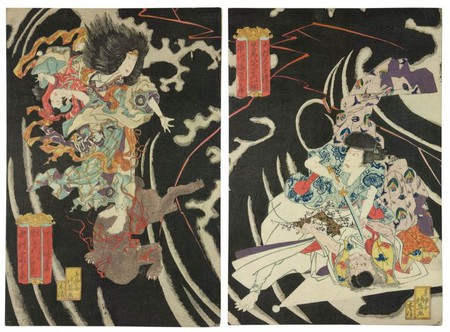 Hokuei, One of a series of imagined pairings of actors, from the series ‘The Eight Dog Heroes of the Satomi Clan’, 1833. The story it is based on tells of eight brothers conceived from the magical union of Lady Fuse with her father’s dog, Yatsubusa. The children are born as spirits in the form of eight green spheres, each containing a Chinese character denoting a Confucian principle, such as benevolence, loyalty, and sincerity. The story tells how Kanamari Daisuke, a family servant, seeks to reunite the brothers and restore the honor of the Satomi clan. | © National Museum of Scotland 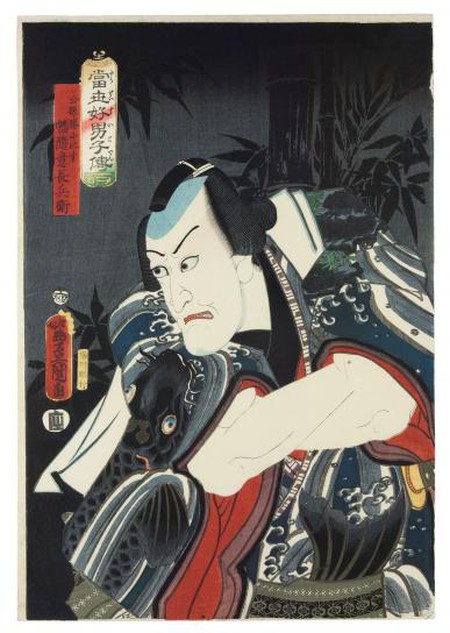 Kunisada, Ichikawa Ebizō V as Banzui Chōbē, from the series ‘Tales of the Water Margin for Our Times’, 1859. This atmospheric night-time scene illustrates the phenomenon of adapting Chinese tales, where Japanese warriors are substituted for the Chinese ones. Banzui Chōbē here stands in for the Chinese hero Gongsun Sheng. This print was produced as one of a series, but when Ebizō V died in the third month of 1859, aged 68 years, it came to serve as a fitting memorial. | © National Museum of Scotland. 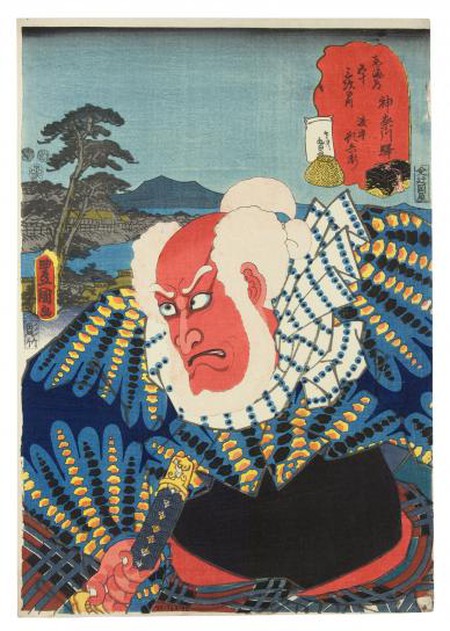 Kunisada, one of four designs from the series ’53 Stations of the Tōkaidō Route’, 1852. Series were a common method for publishers to encourage people to keep buying prints. Many, such as this one, were based on the Tōkaidō, a processional route leading west from Edo to the imperial capital, Kyoto. Here, Kunisada has produced striking designs of actors delivering the characteristic ‘stage pose’ of Kabuki and has set them against landscapes depicting the post stations along the route. | © National Museum of Scotland

Kunisada, Crowds Visiting the Special Display at Naritasan Temple, 1856. Buddhist temples often staged viewings of important paintings and sculptures in order to raise funds. Among the visitors here are a group of seven Kabuki actors, who have caught the attention of men and women nearby. Naritasan Shinshōji is a large Buddhist temple in the town of Narita, north-east of Tokyo. It remains a center of worship and a popular tourist. | © National Museum of Scotland 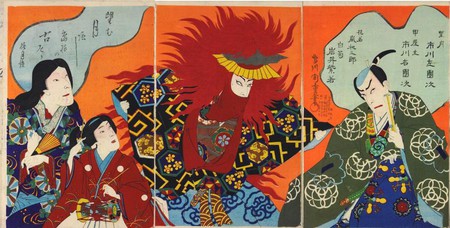 Morikawa Chikashige, Scene from the play Mochizuki, 1882. Yasuda Tomoharu has been murdered by his own cousin, Mochizuki Akinaga (right). One of Yasuda’s retainers, Ozawa Tomofusa (centre), now runs the Yoroiya inn. When Yasuda’s wife Shiragiku and young son Hanawaka arrive there unexpectedly, Ozawa greets them with joy. By chance one of the other guests is Mochizuki and the scene is set for revenge. Ozawa organizes entertainment and performs a lion-dance. When Mochizuki becomes drowsy thanks to plentiful sake, Ozawa strikes. | © National Museum of Scotland 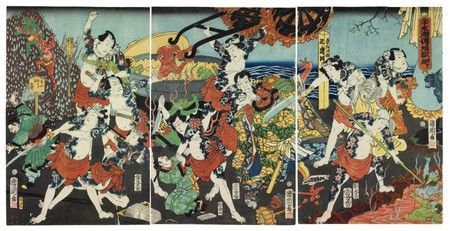 Kunichika, A Tour of Hell by the Water Margin Heroes, 1864. The title announces these characters as heroes of the Chinese romance, The Tales of the Water Margin, who are storming Hell. They are recast as Edo gallants with their elaborate tattoos, who are in turn portrayed by Kabuki actors. In 1864, the political situation was increasingly unstable, and the implication seems to be that when the regime is corrupt, the heroes of society are expected to smash the system and dispatch the bureaucrats. | © National Museum of Scotland