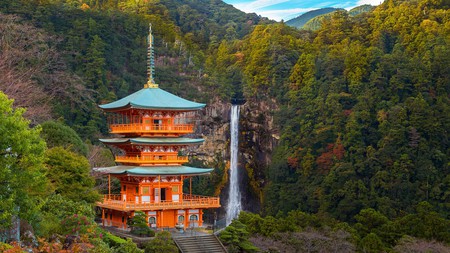 The closest thing travellers get to anything green in Tokyo is the sheet of seaweed wrapping their sushi. But beyond the capital, Japan offers an eco-friendly array of natural experiences for visitors to sink their teeth into.

Ecotourism means responsible travel to natural destinations that helps conserve the local environment. For all its mega-metropolises, Japan shows off many gorgeous places in the great outdoors that would benefit from a sustainable visit. While the buzzing neon lights of Shinjuku might not be too kind on Mother Nature, many of the country’s other top attractions certainly are. Bamboo groves blanket history-soaked Kyoto. Coral reefs and tropical fish fringe some of Japan’s far-flung islands. Mount Fuji is one of Japan’s must-see sights. And to get around, the shinkansen (bullet train) runs on electricity rather than diesel. From sand dunes and snowy peaks to wild deer and waterfalls, discover the country’s best ecotourism destinations in this green guide to Japan.

Forget the ecotourism qualifier – Mount Fuji is one of Japan’s best destinations, period. At 3,776m (12,389ft), Japan’s tallest mountain can be spotted from Tokyo on a clear day, but the views are much more impressive up close. Head to the Fuji Five Lake (Fujigoko) region north of the mountain or the Hakone hot spring resort to the south-east to see the summit sparkle in the water’s reflection, or even conquer one of four climbs from early July to mid September. The Fuji-Hakone-Izu National Park also boasts the five-storey Chureito Pagoda, the volcanic Izu Islands and the silky Shiraito Falls. The park’s entry fee helps preserve this world-renowned natural marvel – the epitome of ecotourism.

Our top pick of eco-friendly accommodation near Mount Fuji:

Sitting just below Kyushu – the southernmost of Japan’s four major islands – the island of Yakushima is blanketed in millennia-old cedar trees. These 1,000-year-old plants are nicknamed Yakusugi, combining the island’s name with the Japanese word for cedar, sugi. The towering Jomonsugi is thought to be more than 7,000 years old. But it was lucky to survive a logging onslaught during the Edo Period before being protected by national park status 2012, one of 30 across Japan. Yakushima inspired the 1997 Studio Ghibli film Princess Mononoke, the tale of a young prince caught between the forest’s gods and the humans depleting it. And when mist lingers between the yakusugi, it’s easy to see why Yakushima sparkled on the big screen, and why this rare piece of nature deserves a place on this list.

Our pick of the best accommodation in Yakushima:

Another 500km (311mi) south, this sun-kissed chain of coral-fringed islands is a subtropical paradise in the Pacific. And what makes this untamed, far-flung part of Japan one of the country’s must-visit ecotourism destinations is precisely how un-Japanese it seems. On the north coast of Ishigaki, Kabira Bay’s white sand and turquoise water form one of Japan’s most gorgeous coastal views. People can’t swim there, but glass-bottomed boat tours reveal colourful coral and even more kaleidoscopic marine life. Nearby, the untamed island of Iriomote can be explored by kayak or paddle board – rivers snake through its dense mangrove forest, which is crawling with the unique Iriomote wildcats. And even further out, visitors can swim with manta rays off the Kerama islands or dive with 100 hammerhead sharks off Yonaguni island between January and March.

Our pick of the best accommodation on the Okinawa Islands:

From the white sand of the Okinawa Islands to the white snow of Nagano, host of the 1998 Winter Olympics and home to a veritable buffet of ecotourism experiences in the area surrounding the city. Jigokudani Monkey Park (Jigokudani Yaen-koen) is famous for the most relaxed population of Japanese macaques, or snow monkeys, anywhere in the country thanks to the natural hot springs these playful primates inhabit. To the west, Mount Yari soars above the Northern Japanese Alps, offering a breathtaking terrain for hikers between April to November, especially when autumnal leaves flare each fall. Then midway between Nagano and Tokyo, the Karuizawa bird sanctuary is a haven of giant flying squirrels – easily Japan’s most adorable native animal.

Our pick of the best accommodation in Nagano: 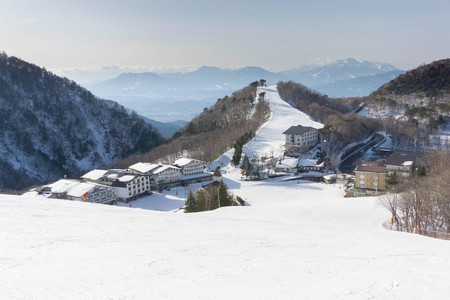 If the Okinawa Islands feel like a slice of the South Pacific, Tottori is straight out of the Sahara Desert. And like Okinawa, it’s the exoticism of this unspoiled ecosystem that makes it one of the country’s most special ecotourism destinations. Japan’s largest sand dunes have been formed by millennia of winds off the Sea of Japan, which still shape this ever-evolving 16km (10mi) stretch of Honshu coastline. Protected by the Sanin Kaigan National Park, some of the dunes tower 50m (164ft) above sea level – otherworldly terrain navigated by paragliders, sand-boarders and camel-riders, who only add to those Saharan vibes.

Our pick of the best accommodation in Tottori: 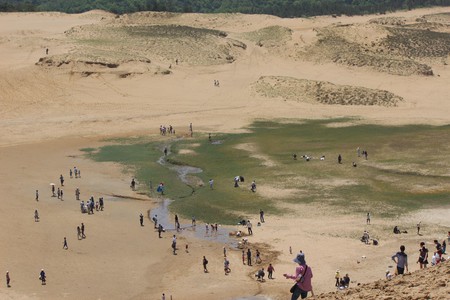 Despite being more than 1,000km (622mi) south of Tokyo, the Ogasawara Islands are officially administrated by the capital. But with only two of the 30 islands inhabited, it couldn’t feel further away from Tokyo’s crush of humanity. Known as the Bonin Islands in English, the Ogasawara Islands enjoy similarly sunny weather as Okinawa – perfect conditions for exploring the region’s luscious jungle, untouched beaches and coral reefs. Only Chichijima (Father Island) and Hahajima (Mother Island) are populated by people, but the whole place is covered with uncommon plants and animals, which explains the ultra-strict rules about what visitors can bring in. The only way to get to this remote corner of the country is the weekly 24-hour ferry from Tokyo, but it’s this extreme isolation that makes its ecosystems so unique, and makes its ecotourism opportunities so precious.

Our top pick of eco-friendly accommodation on the Ogasawara Islands: 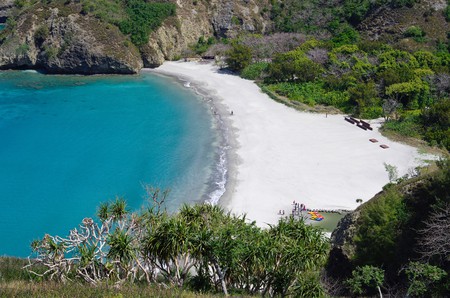 The ancient capital of Kyoto is a victim of overtourism, with tourists trampling the quaint shrines and rock gardens that put this city on the map. But the bamboo groves of Arashiyama on the western edge of town help preserve nature within Kyoto, which is a big tick in the ecotourism box. Paths steer cyclists and pedestrians through this colossal bamboo forest, which comes alive when the skinny stalks sway back and forth in the breeze. The groves are a picturesque place to embrace the distinctly Japanese tradition of forest-bathing – not some onsen shrouded in foliage, but the notion of diving into nature with all five senses to reconnect with Mother Earth.

Our pick of the best accommodation in Kyoto: 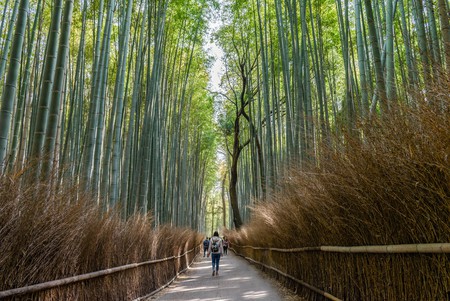 Sending water tumbling off a cliff from a height of 133m (436ft), Japan’s tallest single-tier waterfall is so majestic that it was once considered a religious site. These days, the mist of Nachi Falls (Nachi no Taki) sprays the three-storey pagoda of Seigantoji within the Kumano Nachi Taisha shrine, framing a postcard-perfect perspective of nature’s awesome power plus monumental Japanese architecture. Follow the walking trail to the torii gates of Nachi Taisha for even loftier views of this unspoiled chunk of the Kumano area south of Osaka. Believers in ecotourism ought to make the pilgrimage to support the shrines that protect these thunderous falls.

Our pick of the best accommodation near Nachi Falls: 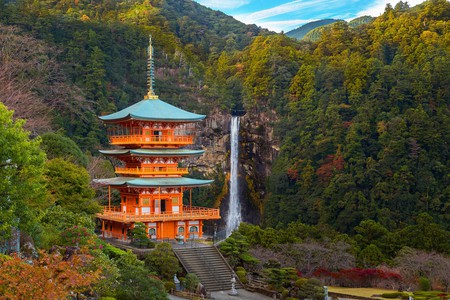 Japan’s first official capital is drenched in history, and its cityscape is a collage of centuries-old Buddhist temples. The biggest reason to visit, though, is the opportunity to bump into Bambi. Nara Park – a huge public space at the foot of Mount Wakakusa – is inhabited by more than 1,000 free-roaming wild sika deer, so sacred that they’re officially designated as a national treasure. Just east of the park and within day-trip distance of both Kyoto and Osaka, Kasugayama Primeval Forest is even more protected. Hunting and logging has been banned since the ninth century, cultivating an ecosystem of rare flora and fauna deemed worthy of UNESCO World Heritage status. This is a rare accoldate for green spaces in Japan, which is what makes Kasugayama a unique ecotourism destination.

Our pick of the best accommodation in Nara: 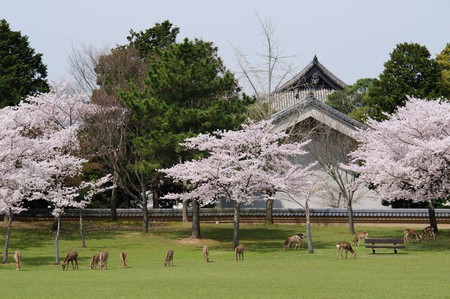