Japan's 9 Most Unique Temples and Shrines

Sitting along the jagged Nichinan coastline, a little south of Miyazaki City, is where you’ll find the semi-hidden Udo Shrine. The shrine is dedicated to Emperor the mythical first emperor of Japan. Connected by a network of steps and rocky pathways, this cave dwelling, vibrantly coloured shrine is home to some of the most incredible views in the area. It’s a popular place for those wishing to start a family, because as legend has it that drinking the water that drips from neighbouring rocks will help you get pregnant.

In the northwest of Kyoto is where you’ll find Kuginuki Jizo, or, more colloquially named, the ‘nail pulling temple’. In Japanese, the term ‘kuginuki’ means ‘nail pulling’, and the site was named after a legend that a merchant who lived near the site in the 1500s. It’s said that the man suffered terrible pains in his hands, and after praying to the god Boddhisattva Jizo, he was told he in a past life pierced an effigy of a man he hated, driving nails through his hands. As a sign of atonement, the man went and left a collection of nails and a pair of pliers by the temple grounds. Over the years that followed many people suffering from aches and pain have visited the temple themselves offering pliers and nails to the gods that reside here. As a result the walls of the site are now covered in the offerings, making for rather interesting decoration. 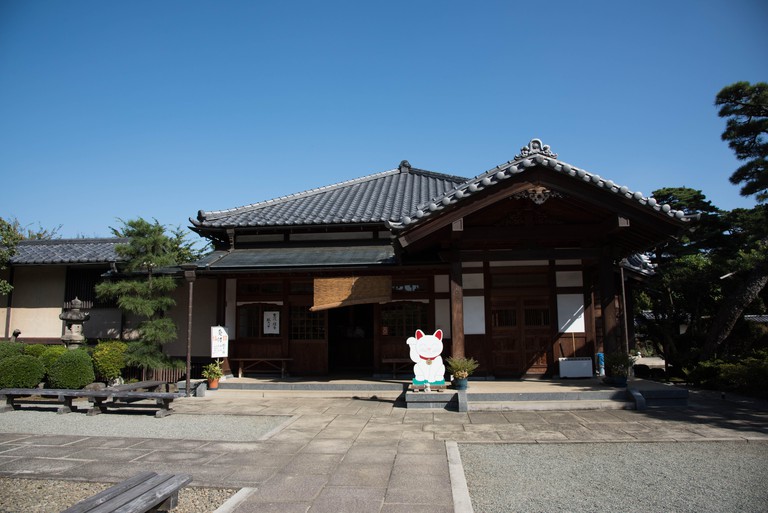 One of the cutest temples in all of Japan, Gotokuji Temple is the site of thousands of maneki-neko, aka the beckoning cat. A sign of good luck and fortune, the story of how this came to be goes back to the time of the Edo-period, when supposedly a cat cared for by a priest of Gotokuji Temple led one of the country’s great feudal lords to the area for safety in the midst of a wild storm. The story goes that the cat attracted the attention of the lord by waving his paw, which is why all Gotokuji kitties have the one raised hand.

From a little kitty temple to a now-massive tiger temple, this site in the mountainous area of Nara is a popular tourist destination for those travelling with kids, thanks to its massive cartoonish tiger statue. The story of the temple follows the journey of Prince Shotoku, who visited during the 6th century to pray for wartime victory on the year of the tiger, on the day and the hour of the tiger. He continued to pray until his troop won the battle. Surrounded by lush mountain ranges and weaving walking paths it’s a ideal day trip location if you find yourself in the area.

A temple dedicated to breasts, the temple is also often referred to as the cheekily named Mama Chichi Kannon (‘chichi’ meaning breasts). The temple got its iconic image from the legend that a woman one visited to pray after not being able to breastfeed. Neighbors noticed her malnourished state and offered her food and care, not long after she began to lactate. Wandering around this sacred site, it’s almost difficult not to get the giggles, especially when you’re greeted by breast iconography everywhere, including a water fountain which shoot water through a pair of stone nipples.

Home to the infamously popular Kanamara Matsuri, also known simply as the ‘penis festival’, this shrine it’s said was once popular with popular among sex workers who visited to pray for protection against sexually transmitted infections. Most of the year it’s a relatively unassuming spot, a small, humble temple fitted with the odd genital reference. However, during the first weekend in April, it takes on a whole new persona when the area is swarmed with penis-loving locals and visitors coming to celebrate one of the more unusual festivals in Japan.

Kappa is a part frog, part man water-goblin, famous in Japanese folklore and said to grab unsuspecting humans as they wander over bridges, through swamps and near other murky bodies of water. He’s so famous in Japan that Tokyo actually has a neighbourhood dedicated to the bowl-headed figure, the place is known as Kappabashi, which translates to Kappa’s Bridge. In the area you’ll find this small dedication to the mythical creature; it’s not big, but it’s interesting enough to make a small detour from some of the neighbouring areas’ more tourist trafficked spots in the Asakusa district.

Located in the central Chiyoda ward of Tokyo is where you’ll find Yanagimori Jinja, aka Willow Forest Shrine, a spot now dedicated to tanuki. A tanuki is a famous raccoon-like figure so loved by Japanese people that his similar-looking American counterpart almost completely demolished the nation’s more regional hubs. A tanuki is said to be a figure of good luck; he also has massive testicles and a supernatural shape-shifting ability. Here you’ll find plenty of monuments dedicated to the weirdly cute, but also kinda’ creepy, figure.

In the historic city of Kamakura, about an hour from Tokyo by train is Zeniarai Benten Shrine, a popular site when both locals and visitors flock in order to wash their money. The site is reported to have the ability to make you rich. It’s said if you wash your cash here in the shrine’s spring, the amount you washed will double. It may sound weird, but the odds are probably just as good as buying a lottery ticket.