An impression of how the meteor show would look | © ALE

A Japanese start-up says it will be able to create an artificial meteor shower over Hiroshima in early 2020, using micro-satellites in space.

ALE is a Tokyo-based company with grand plans. The start-up is in the final stages of developing two micro-satellites that will release tiny balls towards the Earth, which will glow brightly as they enter the planet’s atmosphere. The result will be a man-made meteor shower.

Each of the two satellites, which can stay in space for around two years, will be able to carry 400 balls into space. The balls are filled with a chemical formula to produce the desired reaction as they enter Earth’s atmosphere. The cargo will be enough to last for 20-30 events, and the company wants to offer its services all over the world.

“We are targeting the whole world, as our stockpile of shooting stars will be in space and can be delivered across the world,” ALE chief executive Lena Okajima told reporters at a press conference in July.

Hiroshima was chosen as the original site for the show as the city has good weather, landscape and cultural assets, according to Okajima.

The company will be looking to get a ride on a rocket launched by Japan’s space agency by March 2019 for the first satellite and put the second one on a private-sector rocket in mid-2019.

The plan would be to have the meteor shower over Hiroshima at some point in 2020. If the skies are clear, it’s thought the display will be visible to millions of people over an area of 124 miles, according to ALE. 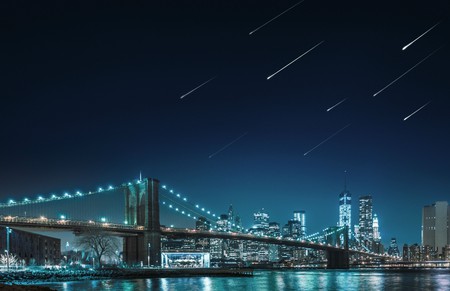 It will be possible to use the satellites on their own or together, and the ingredients in the balls can be altered so they change the colors that are visible from the ground, making it possible to launch a multicolored display of shooting stars.

Private companies and start-ups like ALE are pushing the ever-rising Japanese space sector to new heights. Another company, ispace, is attempting to launch a mission to the moon in the next few years to try and find water on the surface. The Japanese government launched a nearly billion-dollar fund to support space start-ups in the country in March. The $940 million pool of cash will be invested in Japanese spacefaring companies over the next five years.