Japanese Sauces Your Life Won't Be Complete Without 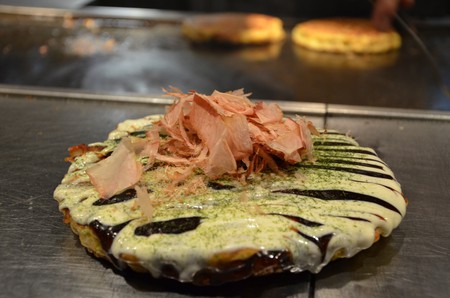 Miso, mayonnaise, bonito, ponzu, tonkatsu dressing, Japanese people love to get on the sauce, in the most literal sense of the term. Like so many other things when it comes to obsessions, reinventions and convenience, nobody does it better than Japan, so it comes as no surprise that it’s the founding country of some of the best sauces in the world.

Though chilli oil is definitely not a uniquely Japanese culinary invention, Taberu Rayu reinvented the chilli oil world and became the ‘must have’ condiment for most households in Japan. A reinvention of the Chinese chilli oil, Taberu Rayu is a chilli-infused sesame oil, which often includes a variety of other ingredients such as corn oil, dried aloe, ginger, guava leaves, leek leaves, paprika, and turmeric.

The oil was invented in the beachside prefecture of Okinawa and became an ultra trendy food accessory, peaking around 2010. Flavour wise, it’s the perfect oil for those who prefer a milder heat. It has a reduced spiciness, but is still bursting with flavour thanks to the addition of fried garlic and onion.

If you know me well, you would know I would avoid chili at all cost but after discovering this, I have instantly fallen in love with it. #Taberurayu

The sauce with arguably the coolest name, Ponzu is a type of watery citrus sauce used in a lot of classic Japanese dishes. It’s made from the combination of mirin (rice wine), rice vinegar, katsuobushi flakes (tuna flakes), and kombu (seaweed) and usually contains soy.

Its an interesting combination of sweet, tart, bitter and salty all in one. Given its diverse flavour you can use it on anything – meats, tofu, salads and more. It’s also an excellent dipping sauce for gyoza aka Japanese dumplings.

In Japan, mayonnaise is loved so much they even have a world for mayo devotees: ‘mayora’. Kewpie mayo is one of the most ubiquitous dressings in the country. To be drizzled over fried goodies like okonomiyaki (Japanese pancakes) and takoyaki, (octopus balls) Kewpie is a deliciously addictive alternative to your standard mayonnaise.

Rich and slightly sweet, what makes this sauce so special is the addition of Monosodium glutamate aka MSG, which may not be fantastic for your health but certainly is delicious on the tastebuds.

Originally created as Tonkatsu (deep fried pork cutlet) sauce, Bulldog sauce can be used on pretty much anything. A little more watery than say BBQ sauce, Bulldog is made from stewing vegetables, fruits, vinegar, sugar, salt and spices, giving it a simultaneously sweet and salty kick.

It’s like a Japanese take on worcestershire sauce. There are three varieties on the market: Worcestershire and two types of tonkatsu sauce, one being a little more salty and the other a little sweet. Given that Bulldog has maintained its popularity on the competitive sauce scene for over 100 years now, its legacy speaks for itself.

The culinary geniuses behind the Kewpie mayo also invented an equally addictive sesame dressing. Originally intended to be poured over salads, fish and shrimp, this creamy sesame sauce is incredibly popular overseas too. In fact it won the title of 2016’s ‘Dressing Of The Year’ from The US Association For Dressings and Sauces. Earthy and smoky, a hint of sweetness, with the creaminess of mayo, this is the epitome of Japan’s ability to balance flavours just perfectly.

#KewpieSesameDressing is our go to dressing for ANYTHING! Trust us, this pure sesame goodness is light, creamy and seriously packs a punch! . Get this Liquid Gold at a store near you! . . #FoodTalkIndia #FoodTalk #Kewpie #Summer #FoodLovers #foodgasm #foodporn #sponsored

On the opposite end of the creamy mayo sauce spectrum sits Saison’s Carrot Ginger Dressing. It’s perfect for lighter side salads, summery lunches and sneaking vegetables into meals for picky eaters. The dressing is a carrot sauce-relish hybrid made from sweet cooked carrots and mixed vegetables. Made from carrots grown by local farmers in the city of Funabashi, located in Chiba Prefecture (not too far from Tokyo). If you like carrot relish, or a little kick of sweetness in your dish, this classic sauce is the one for you.

If there’s a sauce that’s going to give your dish a real kick, it’s got to be Kameya Wasabi Sesame Seed. Produced in Shizuoka Prefecture – an area famous for their wasabi produce – it’s sweet, spicy, creamy and again exemplifies the perfect balance of Japanese flavours.

The sweetness of sesame battles the sharpness of wasabi, creating a taste combination unlike anything else. Perfect for salads, sushi, fresh vegetables or anything else begging for a cheeky little kick.

There are almost as many types of miso in Japan as there are people who eat it, so trying to select one specific sauce is near impossible. Next time you are in the supermarket, grab a bottle of miso sauce, as it makes the perfect pantry staple. Once you have a couple, figure out which one you like best, or which miso works better for different dishes.

Like miso paste, miso sauce is a salty flavour enhancer which is vegetarian and vegan friendly. If you want a salty kick but with a richer umami flavour, miso sauce is definitely the right thing. Great for pouring over vegetables and noodles, you can also make your own miso sauce by simply combining miso paste, mirin (rice wine) and sugar.

Delicious and adorable samplings of our Cold Noodle Salad. Yum! This dish is a fan favourite (and a personal favourite of mine) that is refreshing and packed with so much flavour. If you haven't yet come try it! #yolkporn #noodlesalad #misosauce