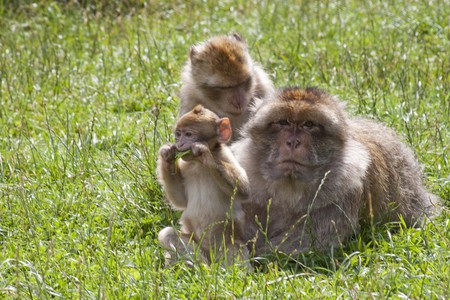 Visitors to Nara or Kyoto may notice that local Japanese monkeys known as macaques have a very close friendship with the deer in the area, as many monkeys catch a ride to get places quickly in exchange for grooming on the go. However, recently scientists have discovered that this deer-monkey relationship is more than just platonic – in fact, it’s more like friends-with-benefits.

So, what’s going on?

This strange relationship came to light when scientists from University of Lethbridge in Canada went to Meiji Memorial Forest in Osaka prefecture to examine the dynamic between the park’s local monkeys and deer. First arriving in November 2012 and January 2013, and then returning in November 2014 to January 2015, they discovered that the paring dynamic had shifted quite dramatically.

Why is it of interest?

The behaviour of the monkeys around these sexual activities is what has drawn most fascination from the science community. The female monkeys would engage in this sexual relationship by climbing onto the back of a sika deer, crouching and rubbing their pelvises in a thrusting and grinding motion and squeaking sexually.

If the deers did not oblige or satisfy the monkeys’ needs, the females would often throw sexually frustrated tantrums, including throwing themselves on the ground and screaming while looking at the deer who rejected them.

Scientists also noted that almost every single one of the interactions with the female primates involved adult male deer. Younger adolescent male deer and female deer tended to avoid the situation all together.

In a paper published by the Archives of Sexual Behavior, the authors of the study write that to their knowledge “this is the first quantitative report of heterospecific sexual behavior between a non-human primate and a non-primate species under free-ranging conditions.”

Though it’s a little too early to really still know what’s at play here, some people have their theories. Firstly when it comes to the male/ female dynamic, why the adult male deer are happy to oblige seems to come from the self-serving reason that quite simply they were happy to receive the grooming, which still comes with the package (so to speak).

Also, like humans, adolescent females primates go through a period of sexual development and discovery. Adolescent female macaques also face a world of sexual frustration given the fact that they’re not the preferred partners of adult male macaques and are commonly rejected, and if they are accepted there’s a chance they’re faced with aggressive sexual behaviour from the male.

So getting around a ‘ride’ from a friendly all-too-happy-to-oblige male deer looks like the better option. Whether this is just a passing fad or a foreboding sign of the future of cross-species relationships requires further research according to the scientific report, but it sure makes a holiday visit to the local deer park a lot more interesting.