Japan is renowned for its extremely rich and unique culture, saturated in traditions that other cultures have lost in the modernization of the world. While many traditions are still thriving some are at risk of dying out. One of those is the tradition of Ama divers — a powerfully romantic custom of women free-diving for oysters, abalone, seaweed and other shellfish wearing nothing but a loincloth and goggles. 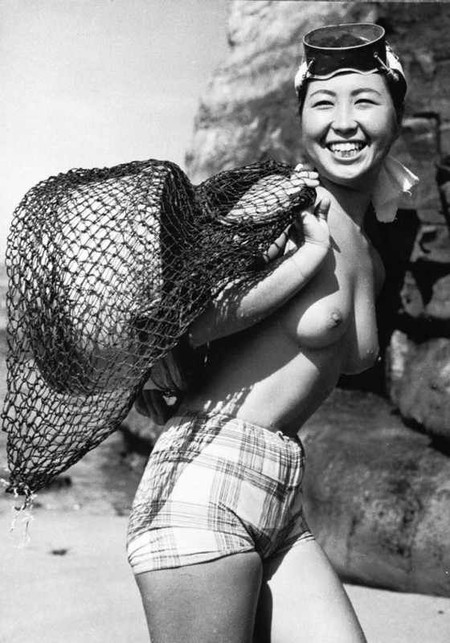 Ama (海女 in Japanese), literally meaning ‘women of the sea,’ is recorded as early as 750 AD in the oldest Japanese anthology of poetry, the Man’yoshu. The Japanese archipelago is a treasure box of lore, and legend has it that the Ama women were once seafaring gypsies of the Asian seas. The tradition is still maintained across many coastal parts of Japan, however, the original practices of these naked sea-goddesses has largely been lost. One photographer in particular, Fosco Maraini, photographed these exceptional women in such a way as to exemplify the indispensable role that female Ama divers play in the cultivation of pearls, and the remarkable acts of physical ability that they display in doing so. 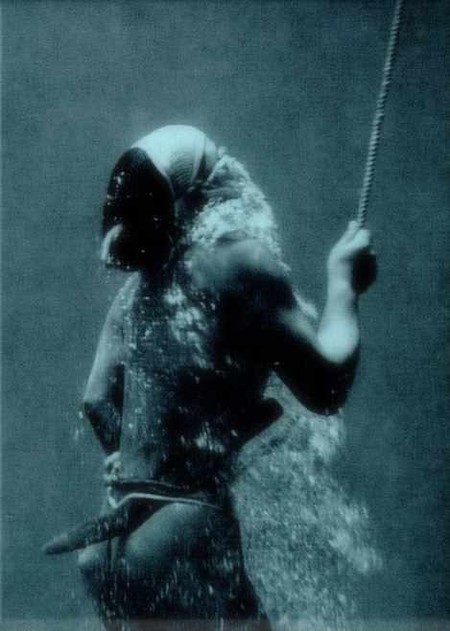 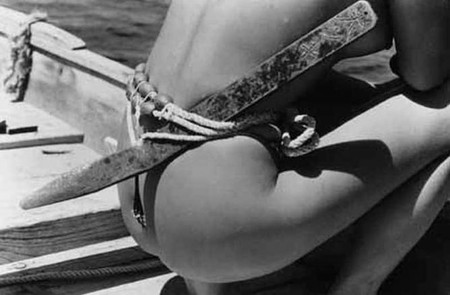 For almost two thousand years, women living along the Japanese peninsula have established an extraordinary livelihood diving deep into the Pacific Ocean for abalone, oysters, pearls, seaweed and other shellfish.

Utilizing special techniques that allow them to deceased to depths of 30 meters they would hold their breath for up to two minutes at a time. The Ama would then resurface, opening their mouths slightly as they exhaled, and making a low whistle known as isobue. They would work up to four hours a day in small shifts. The Japanese believe that women are better suited to this unique career due to the extra layer of fat they have on their bodies, insulating them against the Baltic waters during their long periods under water.

Women are also praised for their self-supporting nature and ability to live independently, thus, making them more suited to the profession. What’s most astonishing is the old age to which the Ama continue to dive; some carry on the art well into their eighties, spending much of their life at sea. 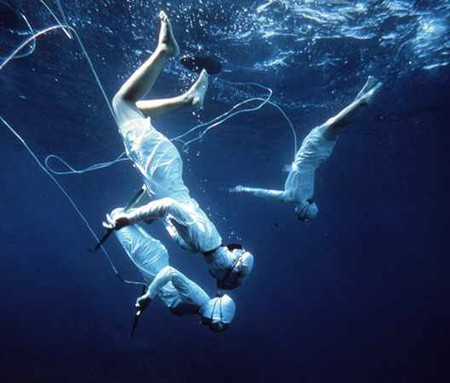 After the Second World War, as the tourism industry in Japan started to boom, visitors began to question the nakedness of the Ama divers. Whether they were prudish and found the sight offensive, or they were just curious, the Ama divers, eventually, were compelled to cover up. It is assumed that health and safety regulations also played a part in the introduction of more advanced equipment to the Ama career. Despite this, there are still some Ama divers who maintain the original uniform, thus preserving the simple, beauty of the Ama. The traditional Ama divers wore only a fundoshi (loincloth) and a tenugi (bandana). They tied a rope around their waists, connecting them to the boat; and would tug the rope to signal to their crew that they are ready to resurface. 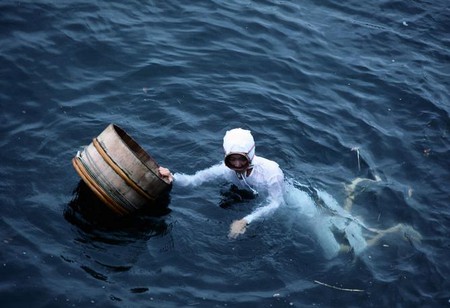 When Mikimoto Kōkichi, a Japanese entrepreneur responsible for the pearl industry in Japan, began his pearl farms, he used the expertise of the Ama divers to herald his business. Mikimoto employed Ama divers to care for his cultivated pearls on Mikimoto Pearl Island, close to Toba City. This in turn has kept the tradition of Ama diving alive, although minor changes did occur. Mikimoto Ama wore full-body, white diving costumes and used a wooden barrel as a buoy. Unlike traditional Ama’s who were connected to a boat, Mikimoto Ama were tied to the buoy by a rope and would use it to rest on between dives. The role of the Mikimoto Ama was to collect oysters from the seabed, insert the pearl producing nucleus and then carefully return the oysters to the seabed, to a position where they would be protected from typhoons, red tide, etc.

The tourism industry at Mikimoto Pearl is vital in preserving the memory of the Ama divers, even if it’s not as romanticised as the traditional Amas, but the tide could change for the small coastal villages whose age-old fishing traditions and Ama heritage could soon be a thing of the past.