Japanese art—the very words conjure images of cherry blossoms floating on the breeze, a wave frozen in time, a colorful and crowded bathhouse. But there is much more to Japanese art than the ukiyo-e (woodblock prints) of centuries past. Contemporary Japanese art consistently challenges these traditional images with modern and boundary-breaking pieces. We highlight the ten most recent Japanese artists who exhibited at the prestigious Venice Biennale, a haven for up-and-coming artists from all over the world, and explore Japanese art beyond the ‘Great Wave.’ 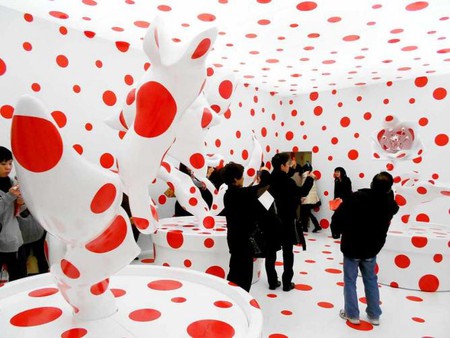 Yayoi Kusama (born 1929) is one of the best-known and most influential Japanese artists of our time. Working primarily in Japan and the United States, Kusama first rose to fame in 1970s New York and has consistently produced work in the decades since, even after her voluntary admission to a psychiatric hospital in 1977. Known for her repeating patterns and lattices of dots and spots, Kusama’s paintings, sculptures, performances, and installations draw on a wide range of themes and artistic movements. She exhibited work for Japan at the 1993 Venice Biennale, and her art has been the subject of retrospectives at the Museum of Modern Art and the Tate Modern, among others. 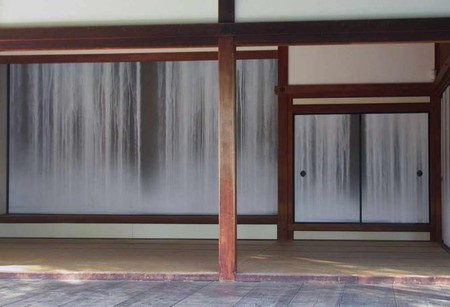 Hiroshi Senju (born 1958) was the first Asian artist to receive an Honorable Mention Award at the 1995 Venice Biennale. He is best known for his monumental paintings and murals of waterfalls, which are often displayed in prominent public spaces in Japan. His works examine the visually complex properties of liquid under pressure, often focusing specifically on the base of the waterfall. Senju primarily employs traditional Japanese painting techniques to create his work—his naturally derived pigments are created from materials like coral, minerals, and seashells and then applied to a special mulberry paper. His works exemplify a historical method and subject that has been approached in a modern manner. 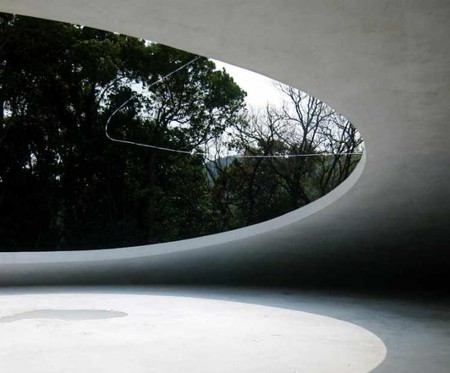 Conceptual artist Rei Naito (born 1961) shapes intricate sculptural environments that invite the viewer to quietly reflect on life and their surroundings. Her minimalist works often utilize natural elements, light, space, and translucency to create a Zen atmosphere within her delicate installations, which are ideally experienced solo and often allow for a fully immersive experience. Naito represented Japan at the 1997 Venice Biennale, and her poetic works continue to be shown and installed at major galleries in Europe, North America, and Asia. 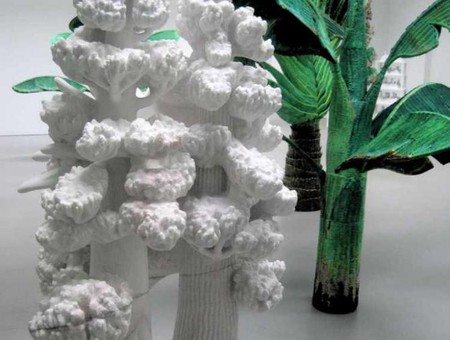 From marble cityscapes, to giant snowflakes, to vibrant jungles— the sculptural works of Yutaka Sone (born 1965) are alternately meditative and playful, precise and exuberant. Trained as an architect at Tokyo University of the Arts, Sone’s fascination with nature and landscapes melds with his interest in the man-made, constructed world to create a unique oeuvre of works, including sculptures, installations, performances, paintings, and films. His works are perfectionistic, paying strict attention to detail and realism while also being surreal explorations of the tensions between natural and artificial worlds. Sone represented Japan at the Japanese pavilion of the 2003 Venice Biennale. 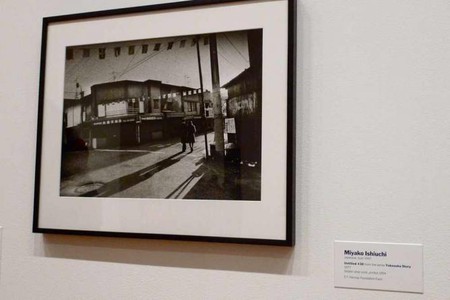 In the male-dominated field of Japanese photography, Miyako Ishiuchi (born 1947) has been a beacon of inspiration since she first rose to fame in the late 1970s. Her work delves into the more difficult aspects of Japanese history and the post-war experience, as well as exploring the transience of the human experience. Her first series of work, Yokosuka Story, was a meticulous study of her hometown of Yokosuka. ‘I am interested in the way that time records itself into things and people,’ Ishiuchi says of her work. Her work was featured at the 2005 Venice Biennale, and in 2014 she was awarded the prestigious Hasselblad Foundation’s international award in photography. 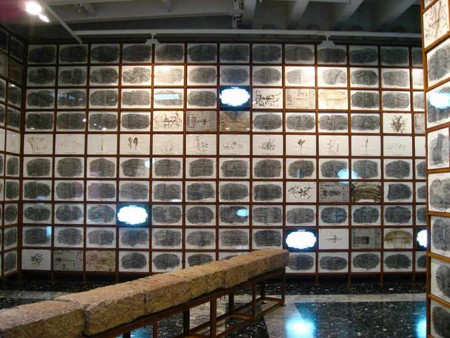 Frottage art, an artistic technique developed by Max Ernst that involves taking pencil rubbings of an uneven surface, has been reinvigorated by contemporary artist Masao Okabe (born 1942) over the past several decades. Okabe investigates Japanese cultural history through his frottages of city surfaces and sites of conflict and tragedy, particularly Hiroshima. Framed frottages of Hiroshima made up his installation at the 2007 Venice Biennale, confronting visitors with physical impressions of the site. His work attempts to capture history before it is literally worn away, manually recording the past with pencil and paper, an unconventional but enthralling approach in the age of digital and photographic art. 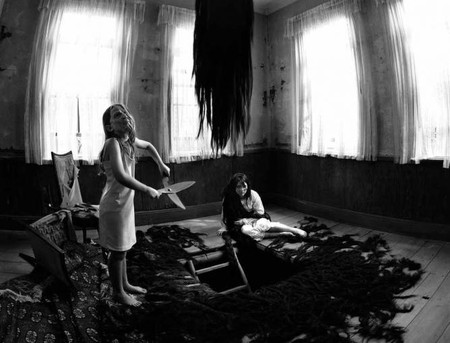 Performance, photographic, and video artist Miwa Yanagi (born 1967) is best known for her photo series examining Japanese female identity, self-image, and stereotypes. Her surreal works often begin as live events, which she then captures through photography and digitally alters to create the desired image. Yanagi was unexpectedly catapulted into fame in the 1990s when another artist was so impressed by her photography that he convinced a German gallery to showcase her work in an exhibition alongside big names like Cindy Sherman and Jeff Wall. Yanagi went on to display her work at major art galleries in the West and in Asia, and exhibited for Japan at the 2009 Venice Biennale. 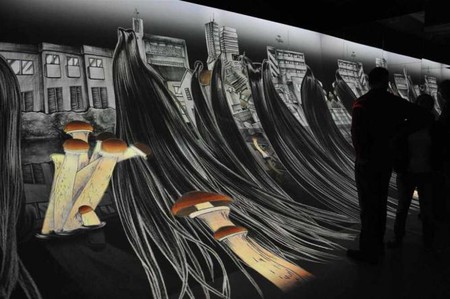 Tabaimo’s (born 1975) video art is strange and unsettling, peeling back the surface layers of contemporary Japanese society to expose the dark, distorted, and surreal elements lurking under the surface. Drawing on imagery from ukiyo-e woodcuts, manga, and anime, Tabaimo produces socially charged videos that challenge the way we view everyday acts and spaces. For the artist, the interaction between the viewer and the work is crucial to the development of meaning and to artistic engagement. Her 2011 exhibition at the Japanese pavilion of the Venice Biennale featured a video work, ‘dolefullhouse,’ which explored themes around the body, the domestic space, contagions, and Western influences on Japanese culture. 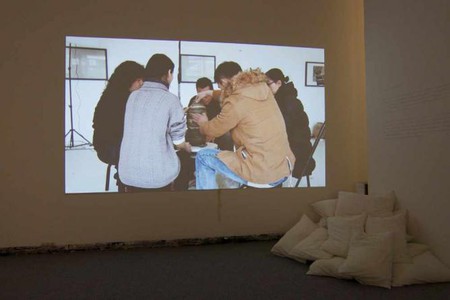 Koki Tanaka (born 1975) primarily produces installation and video art that studies the ethically charged relationships between actions, objects, and people. He often utilizes viewer participation to examine these relationships, as well as the way we work together to form communities. His exhibition at the 2013 Venice Biennale explored similar themes through the lens of the 2011 earthquake and tsunami that ravaged Japan. Tanaka currently lives and works in Los Angeles, and was recently named Deutsche Bank’s Artist of the Year 2015. 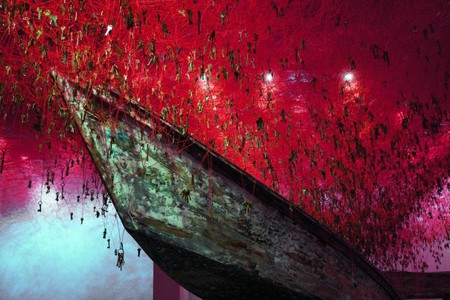 The Key in the Hand, 2015, Photo by Sunhi Mang, Courtesy of Chiharu Shiota

Performance and installation artist Chiharu Shiota (born 1972) uses everyday objects like shoes, furniture, and clothing to create room-filling works of intricate elegance. Black or colored thread is stretched and hung, cobweb-like, between the disparate elements, both connecting and obscuring them. Shiota’s work deals with issues of memory, history, life, and death, and the traces human lives leave behind. Shiota lives and works in Berlin, and has exhibited at major galleries around the world, including a recent solo exhibition at Espace Culturel Louis Vuitton in Paris. She will exhibit for Japan at this year’s Venice Biennale.