Japan Now Has Coffee Water and This is How it Tastes 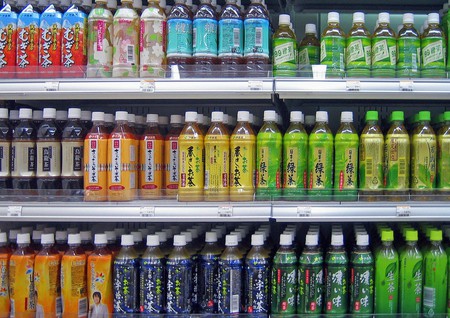 If there was a novelty drinks Olympics, Japan would, without a doubt, be the gold medal winner. For a short while now, the country has been tricking clueless foreigners with its apple, strawberry, and peach flavoured beverages, which, unless you take a close look at the labelling, can easily be mistaken for water. However, in recent times the clear drink trend has gotten more ambitious, which has resulted in the latest offering: clear café latte. So how did it all come about? What options are out there? And most importantly, what does a ‘clear latte’ taste like? We’ll answer these questions for you here.

In the past, Japan has produced drinkable shortcake, canned corn soup, and earlier this year Coca Cola announced it’d be releasing a Japan exclusive version of alcoholic coke; however, one of the nation’s most unique beverage quirks is its love of ‘clear drinks’.

From the beginning, Suntory, the Japanese whisky kings, were the pioneers of the ambitious clear beverage trend, releasing in 2015 Minami Alps Tennensui and Yogurina, an offshoot of its mineral water product that promised to offer the ‘luxurious taste of yogurt’. Surprisingly, it lived up to its claim.

Two years later, the company outdid itself by masterminding its most ambitious project to date, Tennensui Premium Morning Tea Milk, a completely transparent milk tea that tastes unbelievably like the real thing.

To dispel any suspicions that the tea and milk taste was just artificial flavouring, the company uploaded a bizarre, super scientific-looking, unlisted video that was meant to put any rumours to rest. The video showed the distillation method used to collect tea flavouring without the colour. The milk was crafted from extracts of lactose and milk minerals, which got rid of the fat and protein (the two elements that give milk its cloudy colour).

Now in 2018, the famous beer producers Asahi have thrown their hat in the clear drink market by unleashing their newest beverage, Frankenstein, Clear Latte. Unlike other clear coffees that have floated around the market for a while now, what makes this product so fascinating is the fact that it’s supposed to be an authentic-tasting, full flavoured, ice latte, not just black coffee. So how does it stack up? Well, we decided to put it to the (taste) test.

Look: True to its name, it looks entirely like water. There’s no fizz, no frothiness, not even a hint of the explosive coffee flavour that is said to be waiting inside. If you were to pour it out next to a glass of normal water it’d be completely indistinguishable to the human eye.

Smell: Cracking open the brown plastic lid, there’s major aroma emission. Upon smelling a little closer, it definitely does smell like coffee. It’s lighter than a typical brew, but still definitely coffee, similar to those hard Kopiko candies: very sweet and flat with a hint of nuttiness.

Texture: Just how it looks, the drink’s texture is very close to water. It’s not as ‘heavy’ as a milky coffee, but has a slick, almost oily after feel.

Taste: The most important element, it does quite clearly have a coffee taste; although it’s hard to image that if this were the real café deal, it could ever be anyone’s number one coffee order of choice. As the flavour is almost overpowering in sweetness, this drink would probably be best for those who regularly shovel four sugars into their morning blend. However, there is slightly delayed bitterness that crawls from the back and settles across your tongue after taking a sip. In terms of coffee strength, it’s definitely on the weaker side.

Although it tastes far more like a latte than straight coffee, the biggest missing element is the rounded aftertaste you usually expect from a milky brew. That’s because, although it does have some key milk elements like the clear milk tea, it’s missing the fat and protein, which give milk its hearty, full-bodied weight.

All in all, it’s actually not too bad. Even though it probably won’t be the first thing most people would go for when trying to kick start their morning (especially since the caffeine level is zero), for someone who likes a little coffee with their sugar, it’s worth a taste.

Not to be beaten, Suntory has also recently announced that it has set its sights on the late night market, working on the release of a completely transparent All-Free All-Time zero-alcohol ‘beer’. The company is marketing it as an ‘office friendly’ brew. Set to probably offend a lot of beer connoisseurs out there, the company deserves at least a kudos for trying. Clear beer will be on shelves June 19, just in time for summer.