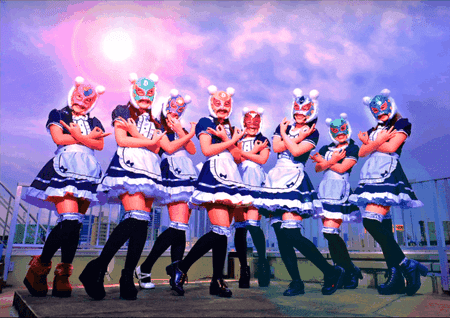 With the rise of Bitcoin, altcoins, and the growing mainstream interest in new forms of digital currency, 2017/2018 will probably go down in history as the years that cryptocurrency broke through. However, beyond the still rather enigmatic world of online trading, the cryptocurrency world is also breaking new ground here in Japan’s pop music scene. Enter Kaso Tsuka Shojo, the world’s first ever cryptocurrency-themed idol group. Known in English as the Virtual Currency Girls, this eight-member idol group is combining the J-Pop elements that made AKB48 such a hit with the current cultural madness that is the cryptocurrency buzz.

Where did they come from?

The band’s leader Naruse Rara, aka Bitcoin Cash (BCH), claims that the whole purpose of the group is to educate and inform their audience on the benefits and uses of cryptocurrencies. They also hope to show that cryptocurrency can be an accessible part of everyday life, just like pop music.

They’ve also promised that in the future, the band’s merchandise, tickets, music sales will be available to purchase exclusively by using the cryptocurrencies they represent. Their website tracks the evolution of currency exchange, starting with bartering, going on to the money era, and finally stopping at the present-day introduction of cryptocurrency, so it almost seems like they’re kind of serious.

Still in its infancy, the creation of the band was only announced on January 12 of this year, and thus their shows, music releases, and everything else are still in the works. But it’s fair to say in true cryptocurrency fashion that they decided to go ahead and announce their incarnation while the Bitcoin hype is inflated.

J-Pop is not averse to gimmicky idol bands, just look at Ladybaby, the cross-dressing wrestler-fronted idol group, or Baby Metal, one of the nation’s biggest crossover success stories. However, what will happen to the Virtual Currency Girls in the near future is full of speculation, just like the cryptocurrency world. For now, you can follow the band on their Twitter account, and check out their website for any new information, but they’ve promised to release something in the not too distant future.