This J-Pop Band Created the Greatest Gameshow in the World 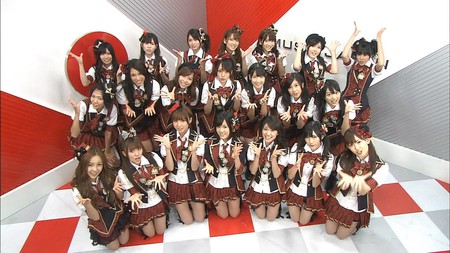 AKB48 is so much more than a J-pop group. The brainchild of producer, Yasushi Akimoto, this pop collective is, without a doubt, a cultural juggernaut in Japan. The band is a merchandiser’s dream; since their formation in 2005, the group of 100-plus members have spawned films, anime, manga, video games, a café and, of course, a stack of chart-dominating albums. But their best creation yet is arguably their bizarre and hilarious TV show AKBingo!.

Broadcast on the Nippon Television Network, this weekly variety program stars AKB48 members and comedy duo ウーマンラッシュアワー (in English: Woman Rush Hour). Each week, members of the group (occasionally accompanied by members of sister groups) partake in weird and wonderful (and some not-so-wonderful) activities in the name of good old dumb fun. With more than 400 episodes, the producers have had to get creative. They’ve come up with some pretty out there ideas. Here are some of the highlights.

In this game, two teams compete against each other in a game of dodgeball. It sounds pretty normal, right? Not so much—the loser has to complete an embarrassing challenge. In the episode below, which aired in 2010, the loser is dared to eat an unwitting stranger’s food without asking permission. Sure, it’s silly. But it’s also hilarious.

Arguably the most stressful thing on TV, in this game, two AKB48 members put opposite sides of a plastic tube in their mouths. The plastic tube has a cicada in it, and the women must compete against each other by blowing into the tube. The objective is twofold: keep the cicada away from their own mouths, and potentially blow it into their opponent’s.

What’s in the Box?

Pretty straightforward—one unlucky contestant sticks their hands into a box that could have anything in it from live animals to a human head. One side of the box is clear, so while the other contestants and the audience always know what’s in it, the contestant doesn’t, and they have to guess what it is that they’re touching while the other members scream in horror.

The band also have a semi-regular quiz component during which members are tested on their knowledge of foreign languages. If they fail, there’s a culturally-themed punishment based on the language. So, for example, if they missed a question about the French language, they’ve got to eat frog.

In this game, two opposing members must choose to sit in front of one of two boxes—one of the boxes contains a sweet smell, and the other has a ‘stinky fart smell’. The contestants don’t know which is which. The person who sits in front of the fart smell gets a face full of fart and is deemed the loser of the round. Based on the video below, it seems some members have a stronger sense of smell than others.

Not technically not part of the AKBingo! TV series, Janken pon is a separate AKB48 show during which new band members are chosen. Do they sing? Do they dance? No, but they do play janken pon, which is the Japanese name for Rock, Paper, Scissors. Forget idol reality shows, this is how they manufacture pop groups in Japan. This clip from 2016 went viral after member Tanabe Miku beat out Yumoto Ami in the final round. Miku’s reaction was more akin to someone who had just won an Olympic gold medal in every tournament simultaneously.