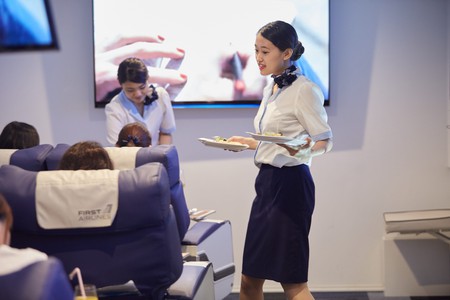 Have you ever wanted to go on a vacation but been held back due to time or budgetary constraints? Well, here in Tokyo, it’s no longer an issue – First Airlines is a company that has created a way you can have an overseas vacation experience without even leaving your chair.

Japan is no stranger to unique, quirky, and at times straight-up absurd attractions – after all, it is home to places like the Robot Restaurant and Kawaii Monster Café; however, this new venture just may be the weirdest.

The idea of vacation experiences was explored in the pop culture sphere with the 1966 Philip K. Dick short story “We Can Remember It for You Wholesale,” which later became the 1990 action film Total Recall, starring Arnold Schwarzenegger and Sharon Stone. In the story set in “the not too distant future,” the lead protagonist dreams of visiting Mars, but due to external pressures it seems like it’ll all just be a fantasy – that is, until his discovery of Rekal Incorporated, a company that specializes in creating false memories through implants and other small tangible reminders.

Although First Airlines won’t be implanting chips into your brain, what they have created is arguably the closest experience to Total Recall on offer today. It’s a virtual two-hour-long vacation complete with authentic check-in, first-class airline service, and paraphernalia to take home (including a replica Japanese passport).

Essentially, it’s a novelty dining experience combined with VR and a potentially excellent tourism advertisement concept all rolled into one. The company launched earlier this year, and beyond the first wave of media attention it has continued to fill up sessions with no major issue for the months that have followed.

To the cynic, it may seem like a strange exercise in the unnecessary computerization of authentic experiences; however, according to First Airlines manager, Hiroaki Abe, the company hopes the experience will be beneficial to elderly or less able guests for whom long-haul international flying may be a near impossibility.

When it launched, the destinations added to the itinerary were the usual suspects: Paris, New York, Hawaii, and Rome. Recently, additional, more unexpected destinations have been added to the itineraries, including a visit to Helsinki, and a “time travel” experience. The flights typically depart four times daily, and destinations are dependent on the day of departure, so if there’s somewhere specific you want to go, you’ll have to check online and make your booking for that day. 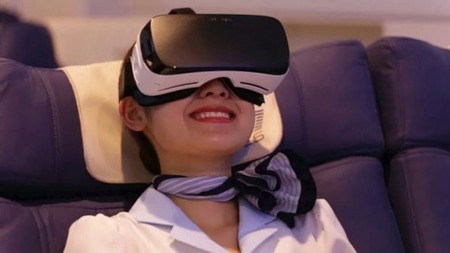 As soon as you step into the First Airlines “departure lounge,” expect a completely immersive experience that’s about as close to the real thing you can get (minus heavy luggage, tired travelers, and long check-in lines).

Guests are asked to sign in at the desk, and in return are given a replica passport stamped with your virtual destination. If you so wish, you can hold on to the passport and bring it back for any returning visits to get it stamped again, just like real life.

When it’s time to board, guests are led to their assigned seats complete with complimentary slippers (for the trip, don’t take them home!) and are instructed to buckle up and pay attention to the safety announcements. 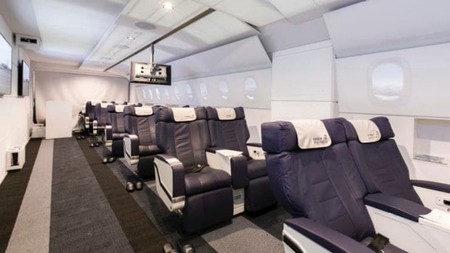 Inside the 'aircraft' | © First Airlines

After a rumbling take off, you’ll soon be soaring over the city, with projected clouds passing by your imitation windows and in real time take-off video footage broadcast on the main screen. After a short while tearing through the sky you’ll be given a VR headset signifying your “arrival.” One you’ve “virtually” touched down, you’re whisked through the city, given up close looks at some of the selected city’s major tourist destinations minus the crowds.

Following all that exploring, you’re sure to be starved, so luckily the experience comes complete with a multi-course meal representative of the nation you’re currently visiting. Don’t worry you won’t be getting airplane food; instead, the meal is more like something you’d find at a fine dining establishment, complete with a drink and dessert.

The food is arguably the experience’s main focus, with what’s on offer staying true to the real deal. The company has also said that they’re looking into add domestic “flights” to the offerings as a way to highlight regional cuisine from across Japan. 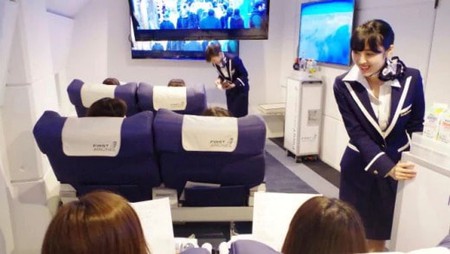 The logistics: time, price, and how to get there

Each trip takes about two hours in total, but it’s best to get there five to ten minutes ahead of your departure, so you can go through the check-in process with no rush.

Both business and first-class flights each depart twice daily at 5:40pm and 8:10pm. A business-class ticket will set you back 4,980 yen (US$45) and first class is 5,980 yen (US$54), thus amounts that are basically the price of a higher-end meal, or a super cheap Ryan Air flight.

The “terminal” is located on the eighth floor of a nondescript office building, an easy five- to ten-minute stroll from the well-connected transport hub of Ikebukuro Station, just at the top of Nishi-Ikebukuro Park.