In Japan, a Wall of Peeping Shibas Has Become a Small Town Tourist Attraction 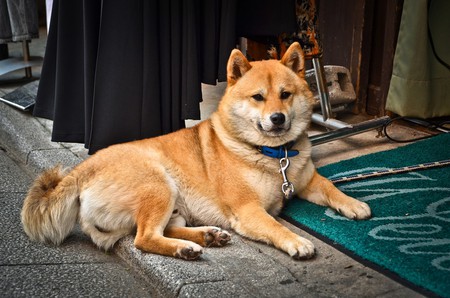 On the southern Japanese island of Kyushu, a wall has become one of the area’s most popular tourist destinations. It’s not a particularly tall wall, or even a beautiful one, but once you visit you’ll see why.

This wall is the peep-hole for three insanely adorable and very friendly Shiba Inu, unofficially now dubbed ‘Three Shibas of Shimabara’. The squishy snouted pups were originally spotted in 2016 by Twitter user @Vocal_YURI, who snapped a picture, which subsequently went viral.

Since their online debut, the trio have become one of the area’s most popular tourist attractions. Each day, the vigilant crew of friendly watch dogs keep a lookout over the street, welcoming passers by. If they’re not in their lookout positions, chances are they’ll come once called.

According to Design Taxi, originally the holes were built to supply airflow to the property, but once the owner of the house noticed the pup’s unwavering fascination with what was on the other side of the wall, he built around 18 more holes to quell the dogs’ curiosity.

Looking like a strange puppet display, the dogs have become so popular that even international guests have added a Shimabara visit to their Kyushu itinerary. Don’t expect to try and win them over with snacks, however, as the sign above the puppy peep-hole reads “We’ll get upset stomachs, so please don’t feed us.”

If you want to greet the adorable wall dwellers in person, make your way to Shimabara, a city that sits on the northeastern tip of the Shimabara Peninsula, about a one-and-a-half hour drive from Nagasaki.

Although it may be a strange tourist attraction, it’s pretty normal in Japan, a nation that loves its dogs so much that just earlier this year it hosted a full Buddhist funeral for 114 Sony Aibo robotic dogs.

Cyborg dogs are nothing new in Japan. Up north in winter, the snow-covered hills of Odate City in Akita prefecture were populated by Google camera-wearing Akita Inu who, with cameras strapped onto their backs, powered through the city’s snowy surrounds capturing a full 360-degree view of the area. Watch the ‘making of’ video to see how they pulled it off.

What’s next for pet lovers is anyone’s guess, but if you’ve ever wanted a pet but can’t deal with the hair or responsibility, there’s always Qoobo, a disembodied tail cushion that blurs the line between animal and robot. Created by a Japanese robot company Yukai Engineering, they’re available to buy now and cost just US$100. Think of all the money you’ll save on food and pet bills.