Why Tokyo’s Sunwolves Are Integral to Rugby in Japan

In a city where sumo, baseball and football dominate, the Sunwolves rugby union team is making a small dent in Tokyo’s sporting landscape. Only three years into its existence, the franchise is already making huge steps towards raising the sport’s profile across Japan, as well as readying the international side for the 2019 Rugby World Cup.

The introduction of the Sunwolves came off the back of Japan’s most successful Rugby World Cup. When the Cherry Blossoms were drawn in Pool B with South Africa, Scotland, Samoa and the USA for the 2015 competition, few gave them any hope. Not only did they win three of their four games, they played scintillating rugby and turned over heavyweights South Africa with the last move of the match in one of the greatest games in the sport’s history.

Based in Tokyo, the Sunwolves play the majority of their home matches at the Chichibunomiya Rugby Stadium. As part of the team’s ongoing promotion and marketing strategy, they also play games in the Mong Kok Stadium in Hong Kong, as well as the Singapore Sports Hub; Japanese rugby has momentum and it’s crucial that they build on it.

Japanese rugby as a whole is clicking into gear. The three wins at the 2015 World Cup were more than the seven previous tournaments combined, while 2019 will see the country host the Rugby World Cup – the first ‘non-traditional’ rugby nation to do so – and each season has seen the Sunwolves progress domestically. In the 2018 season they achieved their most wins, points and tries scored.

Traditionally, both competitions were for teams from just Australia, South Africa and New Zealand. After the introduction of Argentina to the Rugby Championship in 2012, the addition of franchises from Argentina and Japan to Super Rugby followed. Buenos Aires-based Jaguares and the Sunwolves officially joined in 2016. 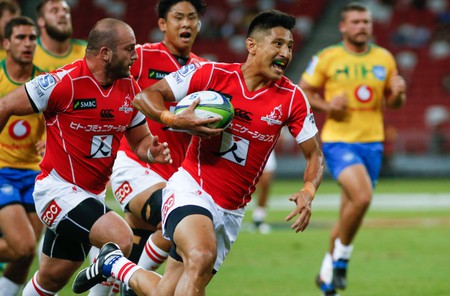 For both new franchises the aim is to develop their domestic and international rugby. Having just one professional franchise enables them to employ the bulk of the country’s international side. Team members playing together regularly against elite competition leads to a higher standard of play, an improvement in skill sets, greater financial backing and investment, and a clear path for youth development.

It’ll be some time before the Sunwolves ever worry the Crusaders or Waratahs at the top of the Super Rugby table, but they are starting at the very bottom and already making decent progress. What’s more, the international side will benefit and rugby fans in Japan get to watch some of the best players in the world on a regular basis. Of the Japanese squad picked for the June 2018 Test matches against Italy and Georgia, all play in Japan and only four represent teams other than the Sunwolves.

The team, essentially an extension of the Japanese national side, is made up of the very best Japanese players. There is also a smattering of Australians, New Zealanders and Pacific Islanders who have gained residency through their time playing in the country. Their style of rugby is high tempo, focussing on handling skills and moving the ball quickly. This is, in part, down to an understanding that trying to compete physically with powerhouses like the Springboks is an exercise in futility.

Shane Williams, Wales’s record try-scorer, played in Japan for three years. “The tempo was relentless and their fitness levels were incredible,” he says. “They play to their strengths, and they play cleverly.”

That synergy in playing style at all levels of the game is helped by coaching. Former All Black Jamie Joseph, who finished his playing career in Japan, was previously coaching both the national team and the Sunwolves, although he has now left his post at the latter to focus on the 2019 World Cup. Same coaching, same players, same style of rugby.

In 2019, as excitement in Japan builds for the World Cup, fans can basically watch their national team in Sunwolves uniforms during the Super League season, and there is an ever-increasing appetite for the sport.

“When they beat South Africa [at the 2015 World Cup], viewing figures in Japan quadrupled for the next game and attention shifted massively,” says Williams. “They’re proud – rugby may not be huge in Japan, but the nation will get behind them in a big way.” If the Sunwolves continue their trajectory, and Japan do well at their own World Cup, it could be the start of something special.