How to Stay in a Capsule Hotel in Japan 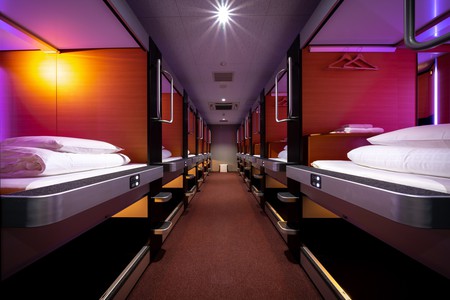 Japan has cornered the market when it comes to the most efficient use of compact spaces. You may have heard of capsule hotels in Japan – unique, affordable accommodation found all over the country, particularly in large cities, in built-up areas and near transport hubs. Missed the last train to your next destination? Need to grab a few hours’ rest before catching an early flight? Then check into one of these futuristic, bed-sized pods, plug your devices into the power outlets provided and recharge.

What to expect from a capsule hotel stay

When you check into a capsule hotel, you’ll typically find two rows of pods, double-stacked. Doors to the pods do not lock (as per Japanese law), but there are lockers provided for mandatory storage of your belongings. Other nice extras may include tiny fold-up desks and complimentary pyjamas (which you don’t have to wear, unlike the slippers provided). Check that the pods in your chosen hotel are air-conditioned, or else you’re in for a sweaty stay. Pod dimensions tend to be 1m x 1m x 1.9m (3.3ft x 3.3ft x 6.2ft), meaning you can only stand up straight in one if you’re a Hobbit. There are shared bathroom facilities with soap and shampoo, and while pod hotels are patronised mostly by men, there are some women-only capsule hotels in Tokyo – some of these have gender-separated floors. To ensure their customers’ rest, pod hotels have no talking, no music rules in place – though if one of your neighbours is a snorer, you’re out of luck; the pods are not soundproof!

The Lodge Moiwa 834, for affordable ski holidays in Hokkaido 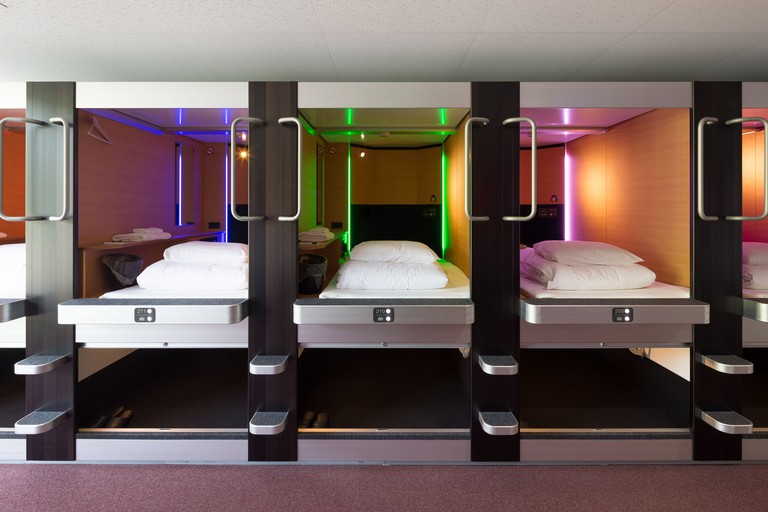 Who said that capsule hotels in Japan are just for urban overnighters? This one happens to be located near some of Japan’s best powder: it’s attached to the popular Niseko ski resort in Hokkaido, at the foot of Mt Niseko. Options include a larger-than-normal single pod room, complete with luggage storage under your bed; a more economical capsule in a two-tiered bunk bed room; or a family capsule if you’re travelling with little ones in tow. Après-ski, unwind by the wood-burning fireplace in the lounge. 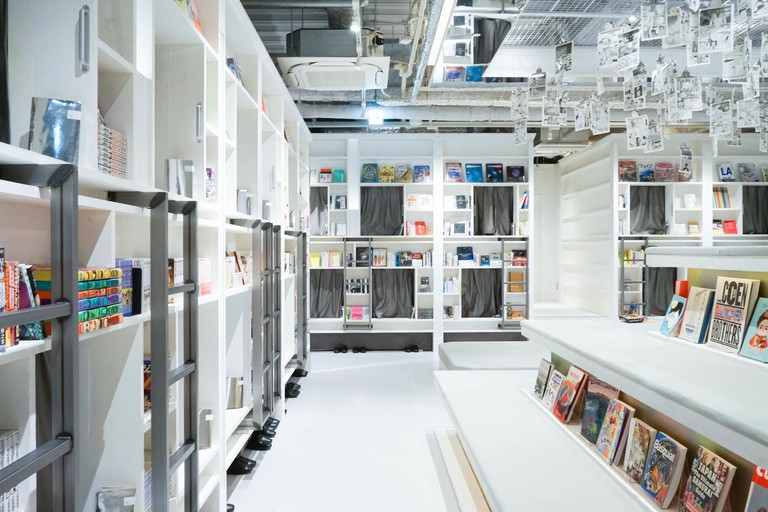 If your idea of a good time is sleeping in a bookshop, you’ve found your little slice of heaven in the heart of Osaka’s trendy Shinsaibashi shopping district. At this trendy capsule hotel, you can sip coffee at the on-site cafe, peruse the collection of over 2,500 books and comic books and use the book lounge with a wrap-around sofa. Come night, scramble up the ladder between the bookshelves up to your pod and block out the world with a privacy curtain. Book a double pod for extra space.

Nine Hours Sendai, for a good night’s rest in Sendai 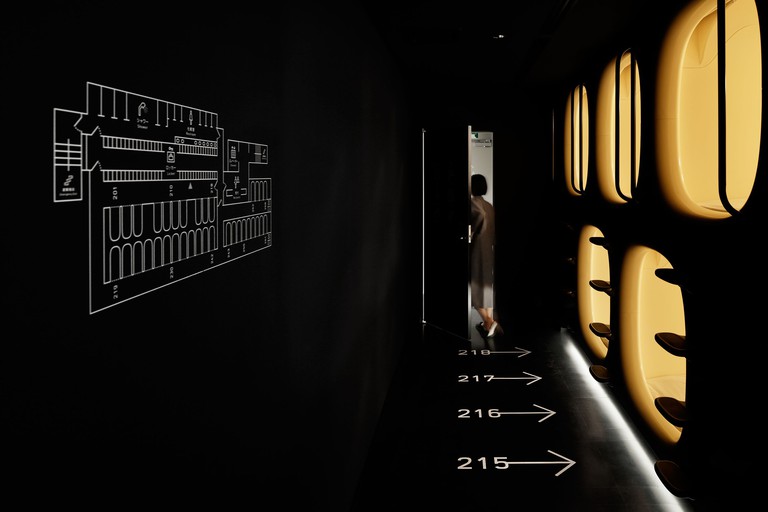 Whether you’re in Sendai for the Tanabata Matsuri summer festival or for soaking in rural onsens and sampling whisky at the nearby Nikka distillery, this capsule hotel is all you need. Book your capsule for the designated nine hours – according to this hotel’s concept, that’s the time required to perform three essential functions: shower, sleep and change clothes. Tuck into your cocoon-like pod with superior bedding for a decent night’s sleep. 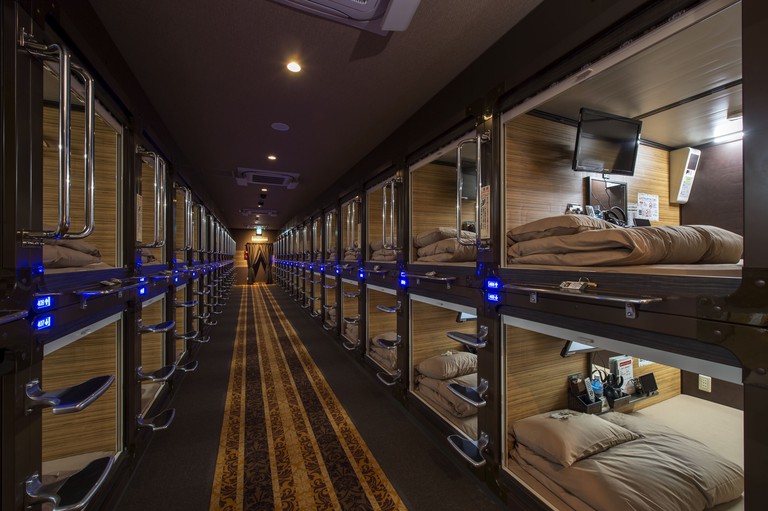 This Tokyo capsule hotel puts a luxurious spin on budget lodging. It’s steps away from one of Tokyo’s main train stations, its satellite department stores and electronics shops, and the east side buzz of neon-lit bars, karaoke parlours and izakaya pubs. Inside the Bali-themed interior, you can hop between the artificial hot springs and swimming pool, peruse the extensive comic book selection or just veg out in your pod, catching up on the latest flicks on your personal TV. Simply plug in the high-quality headphones provided.

HEARTS Capsule Hotel & Spa HAKATA, for proximity to the train station in Fukuoka 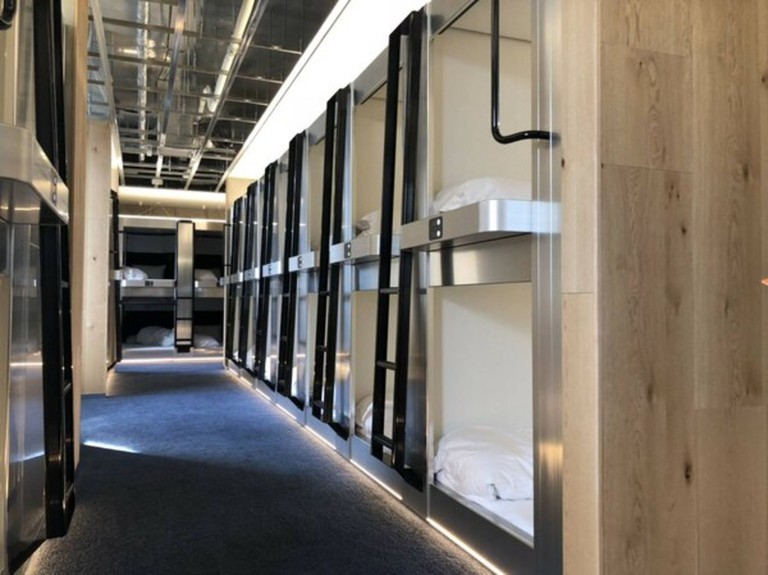 You’ve just arrived in Fukuoka, your gateway to subtropical, sunny Kyushu. It’s late in the evening, and tomorrow you’re catching the train further south to hit the beaches. Or perhaps you’re moving on to Beppu, to soak in the hot springs. Or maybe you’re trying to decide if you want to check out Kushida-jinja, the famed 8th-century Shinto shrine. While you’re deliberating, catch forty winks at this capsule hotel that’s literally a stone’s throw from Hakata train station; it’s got snug, high-tech pods and an open-air lounge. 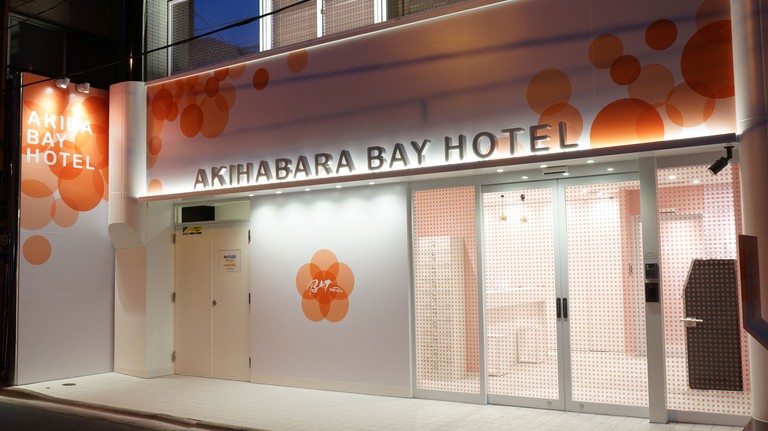 Perhaps you’re in town for the Tokyo Anime Awards Festival, or you’ve packed your Daki costume from Demon Slayer and are looking to make new friends before the AnimeJapan convention. Either way, you’re in the right place. Tokyo’s Akihabara neighbourhood is at the heart of Japan’s youth and anime culture, and this hip capsule hotel totally gels with its edgy vibe. By the way, you’ll know these are women-only lodgings the moment you set foot inside the pink-walled guest lounge and are given your locker key (also pink) before climbing into your futuristic cocoon. 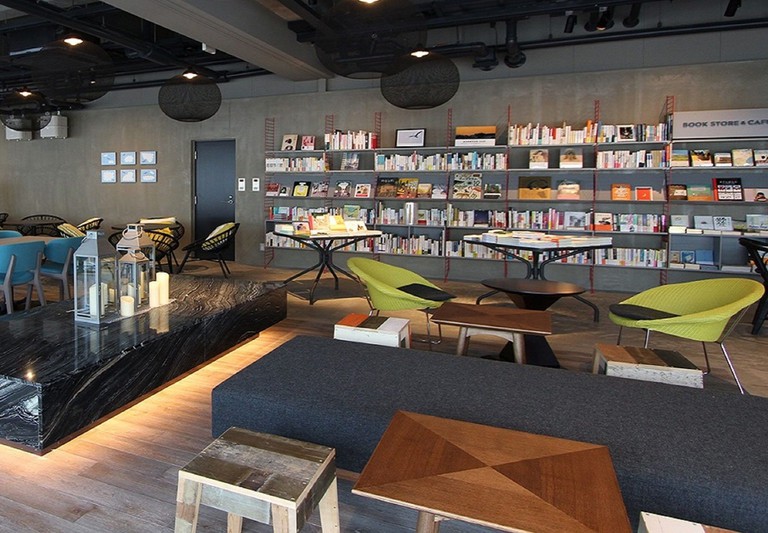 Papier-mâché zebra heads on the wall, a lounge area strewn with colourful cushions, a comic book library and an on-site restaurant with an industrial vibe are just some of the perks that welcome you to this smart capsule hotel aimed at twenty-something travellers, a short train ride from central Kyoto. Pods are typically snug but come with extras such as USB ports, and a lot of thought has gone into tiny details, such as complimentary makeup removers and moisturising cream. 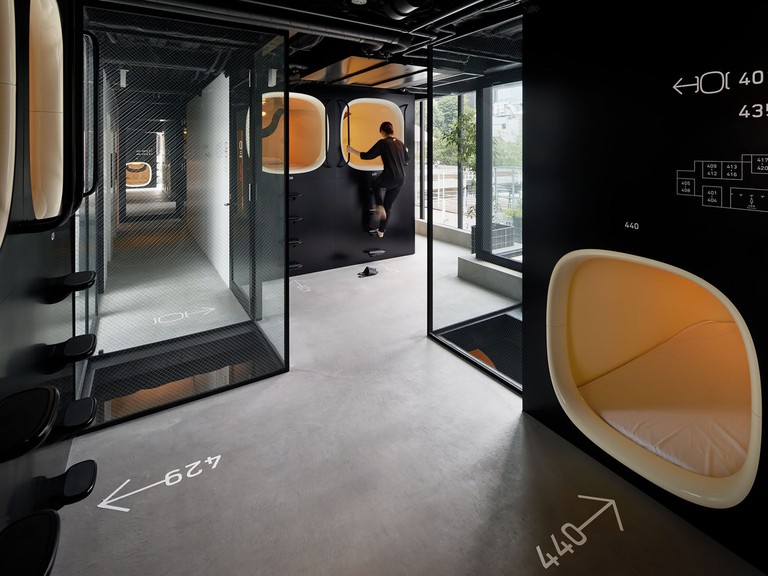 If you prefer the tranquillity of the upscale Akasaka ‘burb to the human anthill of central Tokyo, and like to spend your time wandering among Shinto shrines, shopping in the high-end boutiques of Midtown Mall and perusing exhibits at the Suntory Museum of Art, then this high-tech Tokyo capsule hotel is for you. As an extra bonus for those who are serious about improving the art of sleep, this “sleep lab” monitors you while you slumber, keeping tabs on your breathing using built-in sensors, and giving you your sleep report as a check-out gift.