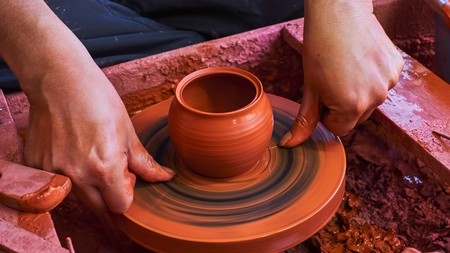 Only 30 minutes from Nagoya and a short taxi ride from the Chubu Centrair International Airport is one of the ancient, beating hearts of Japanese pottery production. With kilns stuffed with history and streets overflowing with traditional, chic and quirky galleries, Tokoname is a convenient and charming small-town stop in the Nagoya region.

Ceramics lovers and apprentices from all over the world flock to Japan, as it’s known for its high-quality variety of pottery styles – both delicate and practical, ancient and modern. While perhaps the most famous Japanese ceramics are associated with the refined tea ceremony, popularised in the 16th century, Tokoname was one of the Six Ancient Kilns of Japan, and its pottery production goes back to the Heian period (794-1185).

Tokoname, which is located 30 minutes south of Nagoya in Aichi Prefecture, has long been famous for its distinctive teapots, bottles, jars, tiles, bricks and Buddhist artefacts. Its iron-rich clays are known for producing earthy, dark reds and burnt siennas when fired. These locally produced ceramics, known as Tokoname-yaki, have been sold across Japan ever since the 12th century. In the 19th and 20th centuries, Tokoname also produced roofing tiles and sewage pipes for a rapidly modernising nation. Even today, artisans continue to craft and sell prized ceramics in countless galleries found along the Tokoname Pottery Footpath, which runs through quaint alleys of 19th-century architecture right in the centre of town.

Tokoname is a delightful village where visitors can get a taste of small-town life in Japan without having to drift too far from major destinations. While pottery lovers may want to go out of their way to visit the town, anyone passing through Aichi Prefecture or Nagoya should consider a day trip or overnight stay. It’s located 35 minutes from Nagoya Meitetsu Station on the Meitetsu Tokoname Line and is the first and second stop on the airport line from the Chubu Centrair International Airport. Here’s how to spend 24 hours experiencing the best of Tokoname and its Japanese ceramics.

INAX is not just one, but a whole series of museums found a 20-minute detour off the Tokoname Pottery Footpath. Collectively, the INAX Museums teach about pottery production and displays thousands of gorgeous ceramics.

At the centre is Kiln Plaza, which preserves a giant 1921-constructed kiln, allowing a close-up look at one of the factories that contributed to Japan’s rapid-fire race towards modernisation in the late-19th and early-20th centuries. Altogether, INAX has five-plus buildings, including the Tile Museum, with over 1,000 decorative clay tiles, and the Architectural Terracotta Museum, which displays ornamental terracotta decorations that were popular throughout 20th-century Japan and were also an inspiration to Frank Lloyd Wright. The complex also comprises Clay Works, a raw clay building that explores the endless expressions of clay and soil and hosts regular educational events and workshops, and the Ceramics Lab and Museum Shop, with modern and traditional ceramics for viewing and sale.

For a breakfast pastry or some Japanese bread, visit the Bon Veiller bakery, a two-minute walk from the museum.

Follow the ancient ceramic footpaths and shop along the way

The top destination in Tokoname is the pottery trail, a winding car-free pathway that passes old buildings, countless galleries and large outdoor works of ceramics – ducts, murals, pickling jars, gutters, pipes and sake jugs. The footpath has two routes, a 1.6km (1mi) path and a 4km (2.5mi) section, both of which begin next to the Tokoname Ceramic Hall. The shorter route will take you past plentiful ceramic artefacts and quaint brick chimneys on a hilly path, with ceramics galleries lining the streets off the main route for your distraction and enjoyment.

A highlight of the footpath is the Climbing Kiln, the largest kiln in Japan. It was built in 1887 and used until 1973. Powered by 10 chimneys, climbing kilns are sometimes used today because they create unexpected variations in texture and colour.

To avoid trekking into town and back, grab a lunch of freshly made soba noodles along the trail at Koyouan (about ¥1,500 or £11.20 per person). The cold soba is comforting and refreshing on a summer day, and you can enjoy it with spicy radish, melt-in-your-mouth shrimp tempura or hearty duck-meat hotpot in the winter.

Take a pottery workshop at the Tokoname Store

While there are multiple pottery workshop offerings in Tokoname, the Tokoname Store, just a block down the road from the Ceramic Hall and Pottery Footpath, is a great spot to try ceramics for yourself. This 40-minute, all-ages-friendly workshop will get you two of your own handcrafted pieces for ¥3,000 (£22.40). Prices start at ¥1,500 (£11.20) for children.

Pieces will ship about one month after your workshop, so make sure to arrange international shipping the day of the class with the staff. While the course is officially in Japanese, pottery is pottery regardless of the language, and you can follow along by watching the instructors. Meanwhile, the friendly staff will help you out and show you what you need to know. The Tokoname Store is right next to a pleasant bookshop-café for a cup of tea before or after your class. Workshops take place every hour throughout the late morning and afternoon.

Enjoy the ocean breeze in the late afternoon

Wander down from the Pottery Footpath to the coast for a late-afternoon seaside stroll. Rinku Beach is a 20-minute walk or a five-minute taxi ride away from the trail and provides a breath of fresh air, great views of Ise Bay and Mie Prefecture across the water and a 3km (1.8mi) stretch of coast for joggers and walkers. The beach lies right next to a large Aeon Mall with expansive food offerings. From the beach, you’ll also see Mentai Park Oarai, which is – believe it or not – a whole theme park dedicated to cod roe.

For dinner, cap off your day in an earthy, wine-cave atmosphere with exciting food at Bar & Bistro Kyouhei-Gama. From creative cocktails to shrimp-stuffed seafood plates, fresh oysters, carpaccio, charcuterie platters and even salad, pizza and bar-style appetisers, Kyouhei-Gama offers a wide range of modern coastal fare. The food has an upscale, stylish flair and bold flavours.

Nincha, a traditional home converted into a guesthouse, is located on a corner of the Tokoname Pottery Footpath. The residence was constructed for a late-Edo period tea ceremony master and renovated in 2019, balancing a traditional ambience with modern comfort. Old-school tatami rooms mean that rather than sleeping on beds, you’ll be on futons, but the high-quality, fluffy futons offer as good a night’s sleep as the best of beds. This traditional guesthouse is an excellent place to awaken your creative spirit.